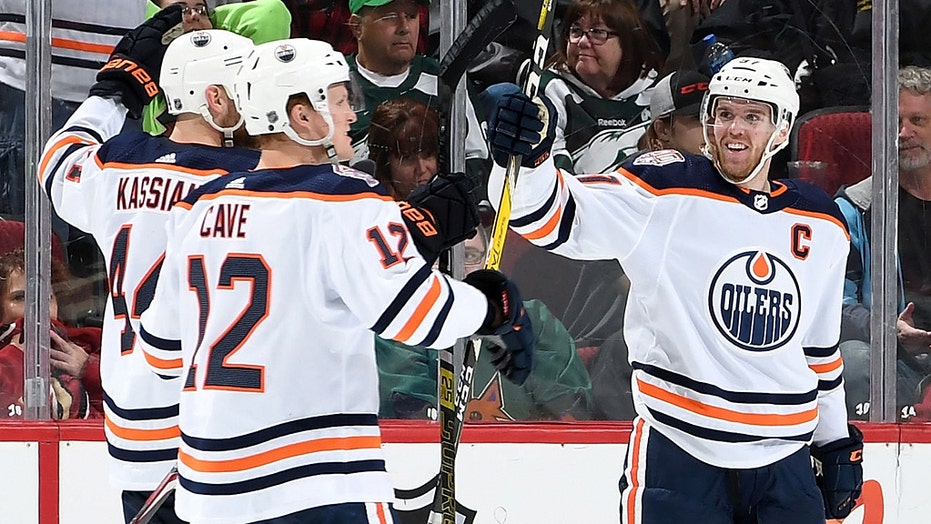 Edmonton Oilers’ Colby Cave is receiving an outpouring of support from teammates past and present as he remains in a medically induced coma following a brain bleed and surgery to remove a cyst earlier this week.

Oilers’ captain Connor McDavid appeared optimistic about Cave’s recovery when speaking to reporters during a video conference call Thursday, asking fans to keep the 25-year-old’s family in their “thoughts and prayers.”

“This is devastating news, Colby is such a strong guy, he’s a good Saskatchewan boy and he’s as tough as they come and if anyone is going to get through it, it’s going to be Colby Cave,” McDavid said, according to TSN.

“I think all the fans out there and everyone needs to keep Colby, Emily his wife and the entire family in their thoughts and prayers and send out good vibes for them. We can just think and pray that he comes out of this and pray that the family can get through it as well. I can’t imagine how hard it is on them.”

Connor McDavid #97 of the Edmonton Oilers celebrates with teammates Zack Kassian #44 and Colby Cave #12 after scoring the game-winning goal in overtime against the Arizona Coyotes at Gila River Arena on March 16, 2019 in Glendale, Arizona. The Oilers defeated the Coyotes 3-2. (Photo by Norm Hall/NHLI via Getty Images)

“You just pray that he wakes up and that family is OK,” he continued.

Cave’s family is also receiving support from his former organization, the Boston Bruins.

According to The Athletic, the Bruins coaching staff and players that knew Cave from his time with the organization from 2014-2019 are recording messages for Cave’s wife, Emily, to play for him over a communication system as the threat of COVID-19 has prevented her from going into the room with him.

“Hopefully that helps,” Bruins coach Bruce Cassidy told the website. “Anything we can do. Every little bit helps and if we can chip in with some encouraging words, then that’s what we’re going to do.”

Cave was placed in a medically induced coma on Tuesday after suffering a brain bleed and undergoing surgery to remove a colloid cyst that was causing pressure on his brain.

Cave scored one goal in 11 games with the Oilers this season. He spent time with the American Hockey League’s Bakersfield Condors, scoring 11 goals with 23 points in 44 games.

Before he joined the Boston Bruins for the 2014-15 season, Cave played five seasons for the Western Hockey League’s Swift Current Broncos. He joined the Oilers in 2019.