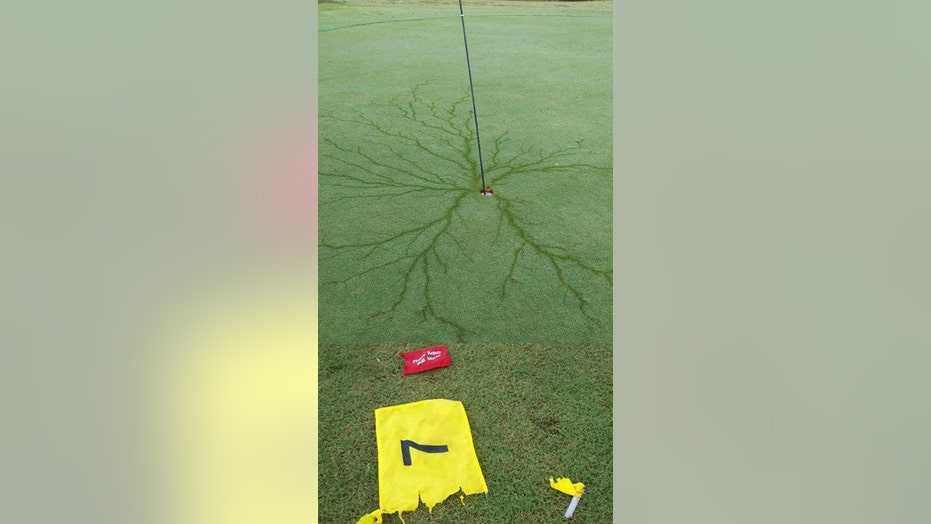 Of the 10 holes-in-one that have been shot at a North Carolina golf club, the last one may qualify as the strangest.

A lightning bolt struck a flagstick at the Eagle Creek Golf Club in Moyock this week, leaving behind a strange pattern burned into the green.

“We at EAGLE CREEK GOLF CLUB would like to congratulate GOD on his almighty hole in 1,” Taylor Paasch posted on Facebook Wednesday. “On hole #7 not sure what tees he played or what the distance was or what club he used, but what a great shot!"

Severe storms with lightning blew through the area the night before, the Virginian-Pilot reports.

Workers found shards of plastic from the flagstick all over the green and the grass scorched in a fern-like branching stretching six to seven feet, the paper reported.

Aftermatch of a lightning strike at the 7th hole at Eagle Creek Golf Club in Moyock, N.C. (Taylor Paasch)

Such patterns, known as Lichtenberg Figures, are typical after a lightning strike, according to the paper.

“It was crazy, I had never seen anything like it," Taylor Paasch, manager of the golf club, told AccuWeather. "It was like it struck right in the hole and spread out from there.”