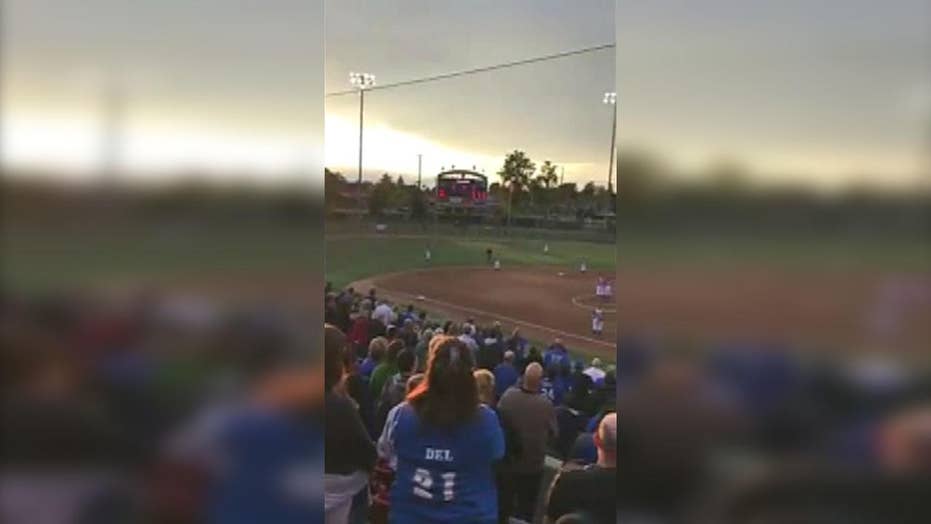 What happens when the national anthem isn't played before a ballgame? In Fresno, Calif., first the crowd boos, then it takes it upon themselves to sing it anyway -- a cappella.

In a show of patriotism before Memorial Day, the crowd at a high school softball championship game at Fresno State's Margie Wright Diamond on Friday night launched into their own rendition of "The Star-Spangled Banner" after it was announced that the song wouldn't be played because it had already been played before an earlier game.

“Honestly, I was shocked (when) the announcer stated, ‘There will be no anthem, let’s just play softball,’” fan Tiffany Marquez of Fowler, Calif., told the Fresno Bee. “Within seconds, you could hear people in the crowd singing and the volume of their voices building. There I was, standing in the middle of a true testament to unity and patriotism.”

Bob Kayajanian, event coordinator, told the Bee that when more than one game is played in a day, the anthem is typically played only before the first game.

“We try to follow with what normally gets done,” Kayajanian said. “It’s all a learning experience for everyone and (going forward) we’re playing the national anthem at every game.”

He added that when the crowd “all started singing,” he thought it was “obviously a wonderful thing to show off their patriotism.”

As for the title game, the Clovis High School Cougars defeated the Buchanan High School Bears, 6-3.