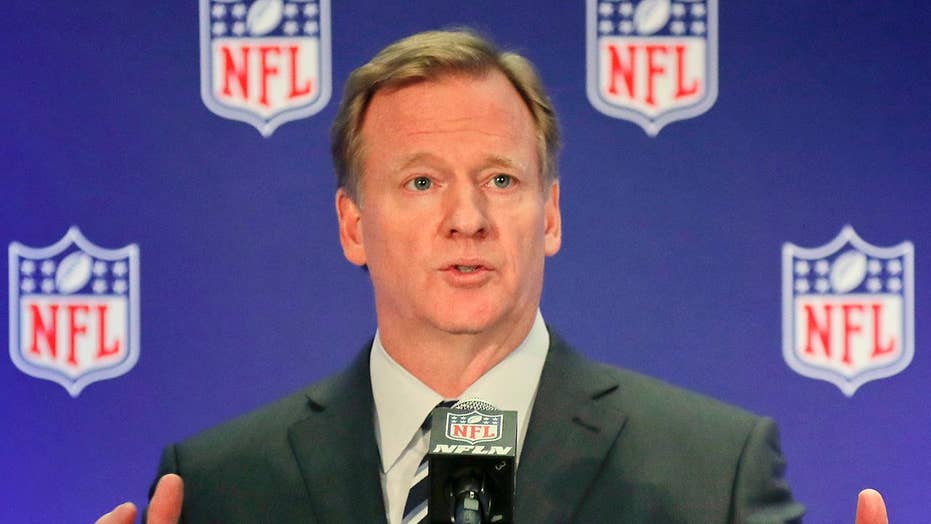 Goodell: Everyone should stand for the national anthem

NFL Commissioner Roger Goodell said he believes all players “should” stand for the national anthem — but stopped short of imposing a rule on standing for the playing of “The Star-Spangled Banner.”

Goodell, speaking to reporters on Wednesday, said it is important for the league and its players to honor and respect “our flag and our country.

Jackie Ibanez reports on day one of NFL owners meeting

“We are not afraid of the tough conversations,” he added. “Out of those discussions, [players] understand that owners and the NFL do really care about the issues.”

Asked about owners who threatened discipline for players who didn't stand, Goodell said the owners didn't discuss it.

A couple hours later, Trump tweeted his thoughts to the NFL in no uncertain terms: “Too much talk, not enough action. Stand for the National Anthem.”

Goodell, who has been in New York City with teams owners for their annual fall meeting, defended the athletes who have been taking a knee in protest, saying they are “not doing this to be disrespectful to the flag, but they understand how it’s being interpreted.”

“We want our players to stand. We’re going to continue to encourage them to stand,” he said.

Last week, Goodell sent a memo to NFL executives and club presidents aiming to move past the weeks-long feud between the White House and players.

“The current dispute over the national anthem is threatening to erode the unifying power of our game, and is now dividing us, and our players, from many fans across the country,” he wrote last week. “Like many of our fans, we believe that everyone should stand for the national anthem. It is an important moment in our game. We want to honor our flag and our country, and our fans expect that of us.”

On Wednesday, Goodell said the league is working with its players to see how it can continue to support them and how changes can be made in their communities.

“They are very clear about and very knowledgeable about [what needs change],” he said.

Tomi Lahren to NFL players: What are you kneeling for?

Fox News contributor says fans are sick of the disrespect of the American flag.

The “take a knee” movement — protesting police brutality and other issues — began when Colin Kaepernick first sat for the anthem during the NFL preseason in early August 2016.

It since has grown to a sizable number of NFL and WNBA players and even spread abroad when a German professional soccer team took a knee during pregame ceremonies in solidarity last Sunday.