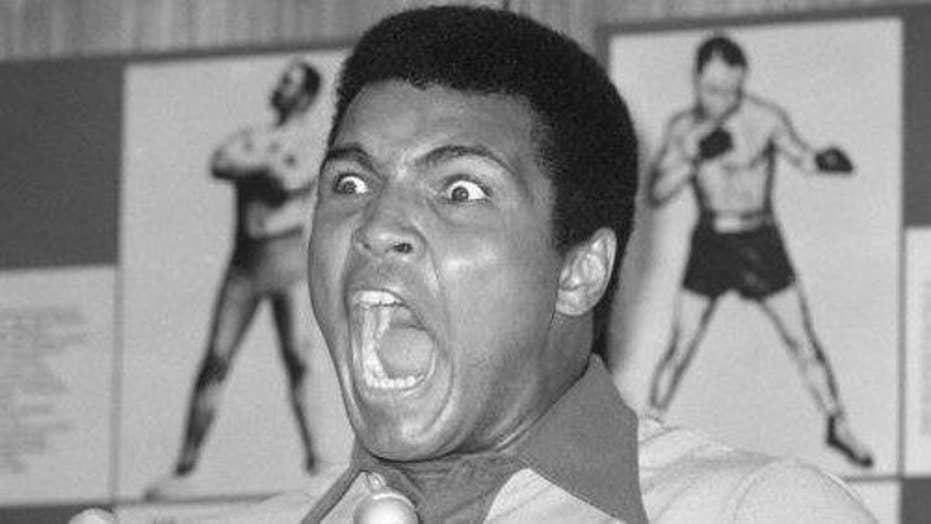 Boxing promoter and businessman weighs in

Muhammad Ali, the three-time heavyweight champion boxer whose electrifying prowess in the ring and controversial outspokenness outside of it made him one of the world’s most recognizable personalities of the 20th Century, died Friday after a battle with a respiratory illness at a Phoenix hospital. He was 74.

Ali family spokesperson Bob Gunnell said Saturday that Ali’s funeral will take place in his hometown of Louisville, Ky., Friday and include a morning motorcade through the city, private burial at Cave Hill cemetery and a public memorial at the KFC Yum! Center.

Gunnell said that former President Bill Clinton, broadcaster Bryant Gumbel, and actor Billy Crystal will deliver the eulogies at the afternoon memorial which will be streamlined live around world.

The spokesman said Ali died of septic shock "due to unspecified natural causes." He said the boxing legend died Friday at 9:10 p.m. local time, spending the last hour of his life surrounded by his family. He was initially hospitalized in the Phoenix area on Monday.

One of Ali's daughters described her father's last moments, saying his heart wouldn't stop beating for 30 minutes after all of his other organs failed. Hana Ali wrote on Instagram that "no one had even seen anything like it."

She said the family was surrounding Ali, hugging and kissing him, holding his hands and chanting an Islamic prayer while his heart kept beating as his other organs failed. She called it a "true testament to the strength of his spirit and will."

“I think he will be rememembered as a man of the world who spoke his mind and wasn’t afraid to take a chance and went out of his way to be a kind and benevolent individual who changed the world,” Gunnell said at a news conference in Scottsdale, Arizona.

Reaction to Ali’s death immediately poured in on Twitter early Saturday from former boxing champions to celebrities and politicians.

Ralph Ali, Frazier & Foreman we were 1 guy. A part of me slipped away, "The greatest piece" https://t.co/xVKOc9qtub

God came for his champion. So long great one. @MuhammadAli #TheGreatest #RIP pic.twitter.com/jhXyqOuabi

Ali!Ali!Ali! #RIP He told me "Hey Kight Rider you're pretty, but not as pretty as me" The Greatests' spirit will always be in my heart!

My statement on the death of Muhammad Ali. #RIP pic.twitter.com/0Eb8jCZQAQ

My thoughts & prayers go out to Muhammad Ali's family. My long statement is posted onhttps://t.co/3E8awvpT08 pic.twitter.com/aEVzMacHg0

Obama keeps a pair of boxing gloves worn by Ali in his private study near the Oval office.

"The president expressed to Lonnie how fortunate he and the First Lady felt to have met Muhammad," White House Deputy Press Secretary Jennifer Friedman said in a statement. "He recounted how special ti was to have witnessed "The Champ" change the arc of history."

Louisville Mayor Greg Fischer said all flags on municipal buildings will be lowered to half-staff Saturday in honor of Ali.

“Hillary and I are saddened by the passing of Muhammad Ali. From the day he claimed the Olympic gold medal in 1960, boxing fans across the world knew they were seeing a blend of beauty and grace, speed and strength that may never be matched again,” the statement read. “We watched him grow from the brash self-confidence of youth and success into a manhood full of religious and political convictions that led him to make tough choices and live with the consequences. Along the way we saw him courageous in the ring, inspiring to the young, compassionate to those in need, and strong and good-humored in bearing the burden of his own health challenges.”

Vermont Sen. Bernie Sanders also released a short statement on the boxing legend’s death saying, "Muhammad Ali was the greatest, not only an extraordinary athlete but a man of great courage and humanity."

At the time fighting under his birth name, Cassius Clay first gained worldwide notice at the 1960 Olympic Games in Rome, where he won gold as a heavyweight. He more fully burst onto the public scene in 1964, when as a 7-1 underdog he fought and defeated Sonny Liston for the professional heavyweight championship. Loudly and frequently vowing to “float like a butterfly and sting like a bee,” Ali knocked out Liston in seven rounds, becoming, at the time, the youngest champion in history, at the age of 22.

It was before the Liston fight that Ali made his famous “I Am the Greatest” speech, a phrase he repeated – and others chanted along with him - countless times in the ensuing years, as he racked up famous quotes, quips and occasional diatribes as easily as he did knockouts. While boxing made him famous, it was that unparalleled showmanship and activism outside the ring that cemented his status as the most recognized person in the world.

After the Liston fight, Ali earned both the condemnation and support of millions in the U.S. and around the world after publicly announcing that he had joined the Nation of Islam. He would make more and much bigger headlines later by making controversial statements about race relations, openly celebrating his friendship with Malcolm X, and staunchly refusing to be drafted for military duty in Vietnam.

In the ring, meanwhile, Ali stirred yet more controversy just 15 months after the first Liston fight, when he won a rematch with a first-round knockout punch so sudden and sharp that some believed Liston had actually thrown the fight rather than stay in the ring with the young champ. That produced one of the most iconic sports photos in American history, which shows a glowering Ali waving a fist over the laid-out Liston, screaming at him to get off the canvas.

The undefeated champ easily defeated a string of opponents until he was stripped of the heavyweight crown in 1967, after his continued refusal to be inducted into the military, and his conviction as a draft evader. Saying at times that his enemy was more “the white man” than the Communist forces in Vietnam, Ali made his position clear with another of his innumerable one-liners: “Man, I ain’t got no quarrel with them Vietcong,” adding that “no Vietnamese ever called me n-----.”

His boxing license was eventually revoked in all 50 states, and he did not fight for more than three years before the U.S. Supreme Court unanimously overturned his conviction in 1971. Ali would regain the heavyweight title two more times, in 1974 and 1978, and ultimately defended his title 19 times.

At 6-foot-3, around 215 pounds and with a 78-inch reach, Ali early in his career paired an orthodox stance with, for a heavyweight, a previously unmatched ability to dance around the ring, eluding opponents’ swings and delivering devastating counterpunches. As he lost a step later in his career, it was his willingness to absorb constant hits while simultaneously wearing out his foe -- a strategy that would become known as the rope-a-dope -- that allowed him to maintain his standing as the sport’s best. When he retired in 1981 after 21 years as a professional, his lifetime record in 61 bouts stood at 56-5, with 37 wins by knockout.

Ali, somewhere between his prime and the aging fighter he later became, returned to the ring in 1971 to fight also-unbeaten Joe Frazier, who had captured the championship while Ali was in boxing exile. The so-called “Fight of the Century” was billed by many as the greatest sporting event in U.S. history, and drew a then-record domestic and international closed circuit audience. Ali lost to Frazier in a 15-round decision, but returned to defeat Frazier in two more matches. The Ali-Frazier rivalry is still the benchmark gold standard for many sportswriters, who continue to invoke images of the intense relationship between the two that fueled boxing for years.

After having his jaw broken and losing another fight in 1973, to ex-Marine Ken Norton, Ali began to plot his comeback. His efforts came full circle in 1974 when he fought George Foreman in the so-called “Rumble in the Jungle.”

Staged in Kinshasa, Zaire, the fight earned Ali a then-unheard of $10 million as he knocked out Foreman in a stunning upset, thus regaining the heavyweight crown. He successfully defended his title the following year against Frazier in “The Thrilla in Manila,” a fight widely regarded as one of the best heavyweight championship matches in history. Ali briefly lost his title when he was defeated by Leon Spinks in 1978, but regained it seven months later in a rematch, making him the first three-time heavyweight champion.

By 1980, the 38-year-old Ali had retired but was lured back by the possibility of capturing the boxing crown for an unprecedented fourth time -- and the promise of an $8 million purse. The match against Larry Holmes turned out to be a disaster that his trainer Angelo Dundee stopped after the 10th round.

The descendant of a runaway Kentucky slave, Ali was born Cassius Marcellus Clay Jr. in Louisville, Kentucky on Jan. 17, 1942, named for the 19th century abolitionist (and slave owner). He began learning how to box at 12 when his bike was stolen. Seething over the theft, one account of his story goes, Ali found Joe Martin, a police officer, in a gym and promised to “whup” the culprit, to which Martin told the 89-pound Ali, “you better learn to box first.”

By the time he reached the 1960 Olympics, Ali was already a two-time Golden Gloves champion. And after turning pro following his Olympics performance, he quickly ran up a 19-0 record before the famed Liston showdown in February 1964.

As his boxing career flourished Ali, who was raised a Baptist, looked for another spiritual outlet. The day after he beat Liston for the first time, he announced that he was a member of the Nation of Islam, and that his name was Cassius X -- the X reflecting the unknown name taken from him by slave owners centuries before. Soon he officially changed his name to Muhammad Ali.

After Ali first refused military service on religious grounds, saying he was a preacher, he was convicted and sentenced to five years in prison. He was free on appeal and made his money on college speaking tours, and lost successive appeals and legal decisions before the Supreme Court overturned his conviction.

As the effect of Parkinson’s began to take its toll on Ali in the mid-1980s – a condition doctors believe was caused by the thousands of blows to his head over the years – he remained a public and newsworthy figure. In 1990, he met with President Saddam Hussein following Iraq’s invasion of Kuwait to successfully negotiate the release of 14 U.S. hostages. Six years later, he lit the Olympic torch at the 1996 games in Atlanta. He also helped found the Muhammad Ali Parkinson Center at the Barrow Neurological Institute in Phoenix in 1997, which aims to aid those stricken with the disease.

In subsequent years, he remained a much-admired sports icon. Sports Illustrated named him “Sportsman of the Century” in 1999, and the BBC named him “Sports Personality of the Century” that same year. In 2005, President George W. Bush awarded Ali the Presidential Medal of Freedom, the highest U.S. civilian honor, and he was named a flag bearer for the 2012 Olympic Games in London. He was the subject of numerous books and a film documentary.

But no one could sum up Ali like the man himself. A amateur poet who often regaled fans and sportswriters with his rhyming pre-fight predictions, in which he often successfully called the round in which the match would end, Ali once took credit for writing what he insisted was the short poem ever written: