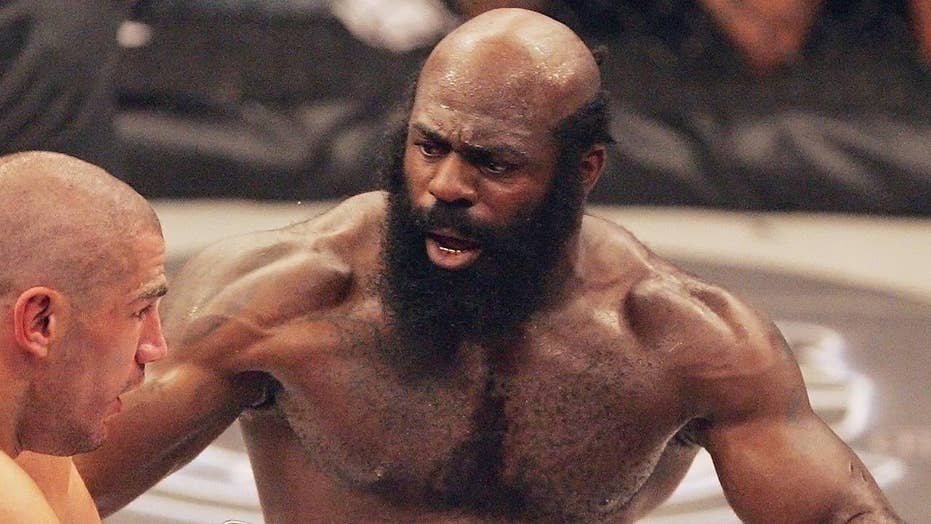 Kimbo Slice, who rose from obscurity to become one of the biggest stars in mixed martial arts (MMA), died Monday at a Florida hospital. He was 42 years old.

The cause of Slice's death was not immediately disclosed. Yahoo Sports reported that Slice had suffered a medical emergency at his home in Coral Springs, Fla.  and was rushed to Northwest Medical Center in Fort Lauderdale.

Coral Springs police spokeswoman Sgt. Carla Kmiotek said Slice's death was not under investigation and no foul play was suspected. Kmiotek said officers were dispatched to his home with the expectation that a crowd would gather there.

"We are all shocked and saddened by the devastating and untimely loss of Kimbo Slice, a beloved member of the Bellator family," Scott Coker, the promoter's president, said in a statement. "One of the most popular MMA fighters ever, Kimbo was a charismatic, larger-than-life personality that trancended the sport."

Born Kevin Ferguson in the Bahamas, Slice was a strip club bouncer and bodyguard who began competing in unsanctioned street fights in 2003. Videos of his violent knockout victories in those bouts became wildly popular online, both for Slice's raw punching power and his distinctive, intimidating appearance.

After gaining viral internet fame at a time when the phenomenon was still relatively new, Slice studied MMA and eventually competed for several promotions, including the UFC and Bellator, which staged his two most recent fights. While he went only 5-2 and never won a championship belt, the personable Slice became one of MMA's best-known figures, attracting large television audiences and crowds to his growing sport.

He was the star of the first MMA show broadcast on network television, beating James Thompson by third-round knockout in May 2008 on CBS with the defunct EliteXC promotion. With Slice and pioneering featherweight Gina Carano as the top attractions, EliteXC's two CBS shows drew big television ratings and introduced millions of viewers to MMA.

Although Slice never reached the sport's competitive heights, his aura never waned among MMA fans: His bout with Dhafir "Dada 5000" Harris four months ago in Houston drew the largest television ratings in Bellator's history. Slice won by a knockout, but the result was overturned after he tested positive for steroids.

Slice was scheduled to headline the Bellator 158 show in London next month in a bout against Thompson.

The UFC issued a statement praising Slice, who appeared on a highly-rated season of their long-running reality competition show, "The Ultimate Fighter," in 2009. Slice also fought at UFC 113 in Montreal, losing to Matt Mitrione before taking his five-year break from MMA.

"He carried himself as a true professional during his time in our organization," the UFC's statement read. "While he will never be forgotten for his fighting style and transcendent image, Slice will also be remembered for his warm personality and commitment to his family and friends."

Slice also had a pro boxing career between stints in the cage, going 7-0 with six knockouts from 2011-13.

For all of his glowering in-cage swagger and outsized fame, Slice was extraordinarily honest about his fighting abilities. He acknowledged being an MMA newcomer with much to learn, never claiming to be anything but a big puncher providing for his family while constantly working to learn the sport's other disciplines.

"The guys who are holding the titles, heavyweight and light heavyweight, these guys are awesome," Slice told the AP in a 2010 interview before his second UFC fight. "I'm really just having happy days in the midst -- being among them, fighting on the undercards, just contributing to the UFC and the sport. That's really what I want to do. I'm not looking ahead to winning a title or anything like that. I'm just enjoying each fight as it comes."

Slice is survived by six children, and he credited his MMA career for allowing him to send them to college. One of his three sons, Kevin Ferguson Jr., made his MMA debut in March.