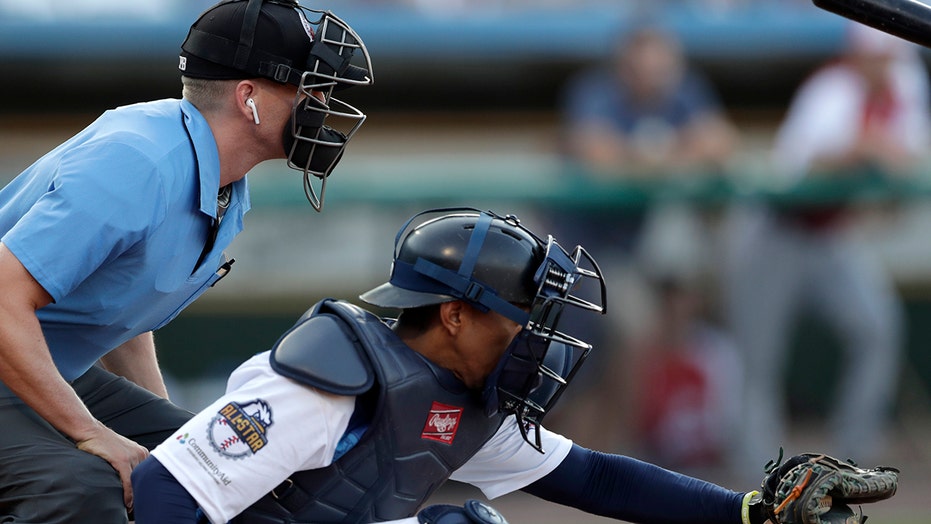 First baseman Ali Sanchez was standing in the on-deck circle so he had a great vantage point of the two-strike breaking ball to Jacob Heyward. It finished so low that by the time it reached the catcher it nearly bounced in the dirt.

Sanchez — like everybody else who was watching this game on a Tuesday night in the Arizona Fall League — had an immediate mental reaction.

Not so fast in the brave new world of "robot" umpires.

Heyward, a San Francisco Giants prospect, was rung up for strike three and then thrown out of the game by human home plate umpire Jose Navas following a brief disagreement with the call.

Heyward's frustration was understandable considering the location of the pitch. The problem was this: Navas was just the messenger.

The Arizona Fall League is the latest professional baseball league to experiment with a computer that judges balls and strikes. The TrackMan system makes its nearly instantaneous decision and sends a signal to the human home plate umpire, who then makes the call.

After about 25 games of the TrackMan at Salt River Fields, there's something of a consensus: The system has its quirks and problems — particularly on breaking balls low in the zone like the one that frustrated Heyward — but it also has promise.

"It's definitely unique, it's different from everything we've learned throughout our baseball careers," Arizona Diamondbacks prospect Seth Beer said. "It's just something new. Something that guys are just a little uncomfortable with so far."

Beer, Sanchez and pitchers Jackson Rees and Tristan Beck all agreed the TrackMan system is excellent on the inside and outside corners but struggles when judging breaking balls low or high in the zone.

"The really loopy breaking balls or the really hard sliders at the bottom of the zone that end up in the dirt, you might end up having trouble with," Beer said. "But for the most part, I don't think it's a terrible thing."

The Independent Atlantic League became the first professional American baseball league to allow a computer to call balls and strikes during its All-Star Game early in the summer. That league is often filled with players on the fringes of professional baseball who are trying to get noticed by an MLB-affiliated team.

But the AFL is filled with some of baseball's highest-regarded prospects, including former No. 1 overall picks like Minnesota's Royce Lewis and Philadelphia's Mickey Moniak. A who's who of current MLB stars have played in the league, including Bryce Harper, Christian Yelich, Mike Trout, Mookie Betts, Giancarlo Stanton and Max Scherzer.

It could be a sign the system is edging closer to the big leagues. Then again, maybe not.

Major League Baseball spokesman Michael Teeven said in a statement that the "experimental program has been a positive learning exercise, which was the objective." He added that during the offseason, the league's plan is to discuss results with clubs and continue finding ways to test the system.

The computer umpires have changed the game in some other ways, mostly small ones.

Sanchez — who is also a catcher in the New York Mets system — has learned to vary his conversations, chatting with the home plate umpire about everything from the weather to family to their upcoming vacations over the winter holidays.

No more negotiating about the strike zone. Nothing can be done.

Beck, who is a top pitching prospect in the Giants' minor-league system, said he's grown to appreciate the computer's impartiality. The zone doesn't change because of star players. It doesn't change in big moments.

"It gives me confidence knowing that every single pitch I throw is going to be called exactly what it is," Beck said. "I throw a close pitch and it's a ball? No argument. No leaning on the umpire that it should have been a strike. I know for a fact that it's a ball or a strike."

There's also no need for the art of framing pitches. Many in baseball believe a good catcher can steal a few strikes throughout the game by making borderline pitches look like strikes. The computer won't be fooled.

Then there's the stats: The AFL's overall batting average for its six teams has hovered around .240 through 27 games, which is a big drop from .259 a year ago. Games at Salt River — which account for about a third of the total and use the computer strike zone — also have an average that's around .240, so it's hard to tell how much it's affecting the game.

"It's happened to everyone at some point this fall," Beer said.

Heyward's ejection led to at least one change. Fans were so irritated with the umpires after the strike call that the AFL wrote up a statement that's read before each game, explaining that the human umpires aren't actually calling the ball and strikes.

Before a game, the announcement was read to the 500 or so fans in attendance. At least a few weren't pleased.

Other fans applauded in agreement. The four umps gathered around the plate didn't say anything, but at least one broke out into a little bit of a grin.