Miami – The death of Miami Marlins pitcher Jose Fernandez shook not only his teammates and family members, but fans and members of the sports community alike.

Fernandez was killed, along with two others, in a boating accident, early Sunday morning. The others have yet to be identified pending the notification of their next of kin. 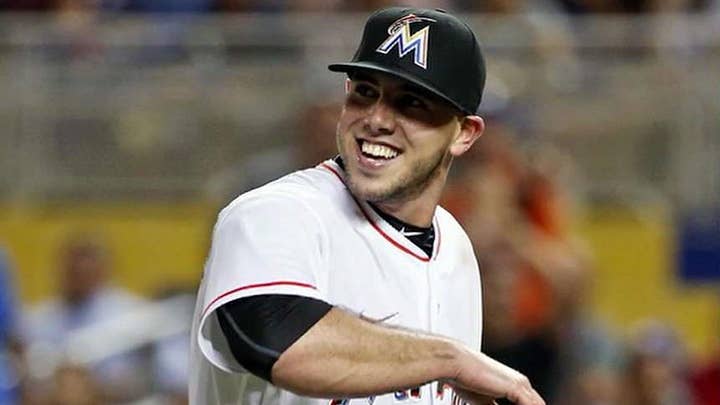 Fans who had tickets to Sunday's game against the Braves or simply wanted to pay their respect for Fernandez were crying outside Marlins Park Sunday afternoon, still in shock with the tragic news.

Ramon Rosario Sr., from the Dominican Republic, recited a verse from the Bible in front of a growing makeshift memorial.

"I felt like everything came down," he told Fox News Latino, adding that he flew from Connecticut to celebrate his son's birthday at the park. "My family arrived Thursday. We have had a great time and we thought we were going to end this weekend here at the game."

Other fans surrounded him.

"We ask God to bring peace to all the families involved," he said.

His son Ramon Rosario Jr. was in tears.

"I was going to celebrate my birthday. I've seen him play. He has great energy," he said. "He brought energy to the games. You felt it as a fan."

Venezuelan Mercedes Gonzalez also had tickets to Sunday's game. The loss of Fernandez impacted her.

"When I found out we were so sad," she said. "We are super fans, as Venezuelans we are big baseball fans," she explained. "We would come to the ballpark constantly. Jose never refused an autograph or picture — he always had a smile. He was like a little kid. This is a tragedy."

Local organizations took to social media to voice their heartache and prayers for the pitcher. The Marlins released a statement which read, “The Miami Marlins organization is devastated by the tragic loss of Jose Fernandez. Our thoughts and prayers are with his family at this very difficult time.”

A game between the Marlins and the Atlanta Braves was canceled, Sunday. MLB tweeted their own shock at the news of Fernandez’s death.

The pitcher’s death also shook other sports teams aside from the Marlins. The Florida Panthers released a statement reading, “The Florida Panthers players, staff, and entire organization extend their most sincere condolences to the family of Jose Fernandez and the Miami Marlins organization. Our thoughts and prayers are with the Fernandez and Marlins families through this profoundly difficult time.”

The Miami Dolphins offered their condolences through Twitter, along with a moment of silence at their Sunday game against the Cleveland Browns.

The University of Miami Hurricanes and the Miami Heat were also among the South Florida sports community to express sorrow for the untimely passing of the Marlins pitcher.

Adding to the absence of the pitcher, video boards at an empty Marlins Park broadcast a large 16 — Fernandez’s jersey number — along with his name. The home game against the Braves was cancelled in the wake of Fernandez’s sudden death.

Fans also gathered outside of the stadium leaving flowers, signed photos, balloons and pieces of memorabilia in a shrine to the fallen player. Fernandez posted a photo of his pregnant girlfriend last week on Instagram, announcing the couple’s first child.

Fernandez was only 24 years old. An investigation into the boating accident continues.

Rodolfo Roman contributed to this report.