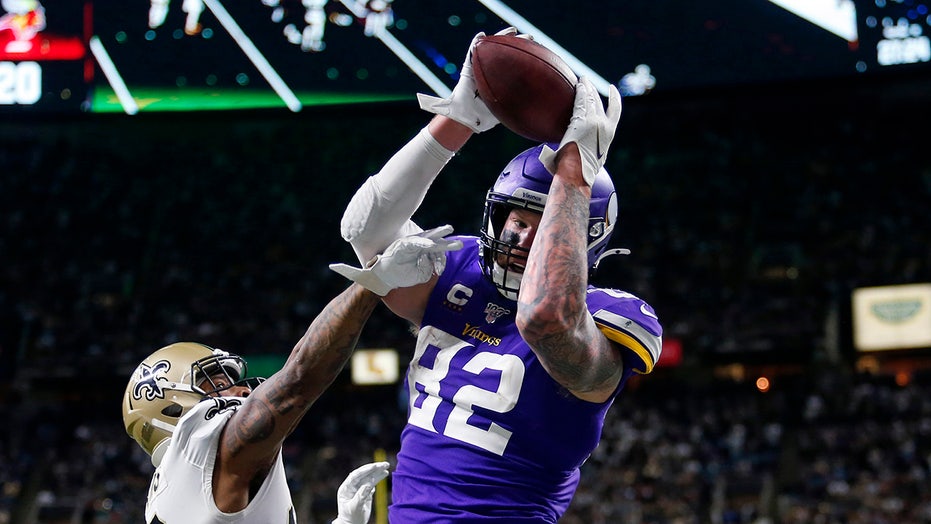 Minnesota Vikings tight end Kyle Rudolph caught the game-winning touchdown pass from Kirk Cousins in overtime against the New Orleans Saints on Sunday during their playoff game, but there was some controversy over the clutch play.

The touchdown pushed the Vikings to the NFC Divisional round and bounced the Saints from the playoffs.

Before Rudolph caught the pass in the corner of the end zone, it appeared he had his arm extended fully toward cornerback P.J. Williams who was defending him.

It also appeared that officials reviewed only whether Rudolph made the catch -- not whether any offensive pass interference took place.

NFL pundits, former players and fans alike debated whether the Saints were jobbed in the playoffs for the second straight season.

Earlier in the game, Saints fans were heated over a Dalvin Cook rushing touchdown. Officials called Cook’s run a touchdown although it appeared that linebacker Demario Davis stopped him short of the goal line. Officials ruled the ball had crossed the plane and awarded Minnesota a touchdown.

Minnesota is set to appear in the divisional round of the playoffs for the first time since the 2017 season.

The Vikings were one game away from the Super Bowl in that season, but they ran into the Philadelphia Eagles who went on to win the championship.