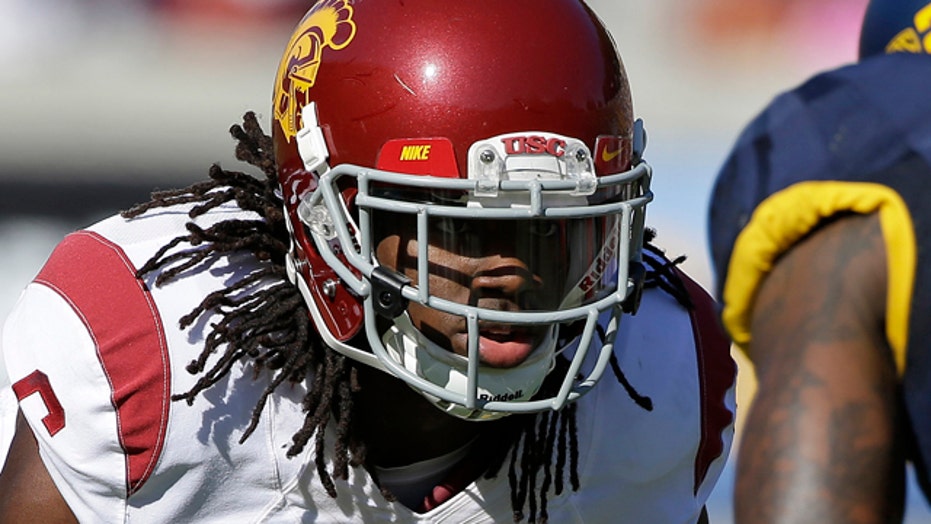 USC star suspended after admitting heroic story was a lie

University of Southern California football star Josh Shaw has been indefinitely suspended after admitting he made up a story that he injured both ankles jumping off a balcony to save his nephew from drowning.

The USC Athletic Department said in a statement Wednesday that Shaw had approached athletic department officials and admitted the story was a lie. The university did not give an explanation for why Shaw lied or how he was actually injured.

"We are extremely disappointed in Josh," head coach Steve Sarkisian said.  "He let us all down.  As I have said, nothing in his background led us to doubt him when he told us of his injuries, nor did anything after our initial vetting of his story."

Shaw said in a statement released by his attorney Wednesday that he injured himself in a fall.

"I made up a story about this fall that was untrue," he said. "I was wrong to not tell the truth. I apologize to USC for this action on my part."

Sarkisian said he appreciated that Shaw has apologized, but the deceit was "unacceptable."

"Honesty and integrity must be at the center of our program," he said. "I believe Josh will learn from this. I hope that he will not be defined by this incident, and that the Trojan Family will accept his apology and support him."

The athletic department also said it regrets posting a story about the lie on the team's website on Monday. It said Shaw has retained legal counsel.

Shaw, a senior cornerback named one of the team's captains, had apparently told the school he was at a family party in Palmdale, Calif., Saturday when he saw his 7-year-old nephew, Carter, struggling in a pool.

According to the Trojans' website, Shaw claimed he had jumped from a second-story balcony onto concrete before dragging himself into the pool and rescuing his nephew, who doesn't know how to swim.

However, questions about the story soon began to appear on social media.

The Los Angeles Times reported that police responded the same night to reports of a woman screaming at an apartment complex about 60 minutes from  Shaw's family function. The police, according to the report, talked to one woman at the complex who saw a man run across a balcony and provided a description.

Another woman at the complex was told about the man on the balcony, and said, "Sounds like my boyfriend, Josh Shaw," according to a report cited by an LAPD spokesman. Though the name was mentioned, the person was never named a suspect, police said.

"There is a mention of a Joshua Shaw in this report but not in terms of him being a suspect," a police spokesman said. "To make any link at this point would be premature."

Shaw is a team captain and a starter in the Trojans' secondary and is widely regarded as a solid teammate. The Florida transfer is a key component of USC's defensive secondary, considered one of the nation's best groups.

Shaw had four interceptions while starting 14 games last season, his second with the Trojans. He has played both safety and cornerback, moving around a defense with little depth due to NCAA sanctions.