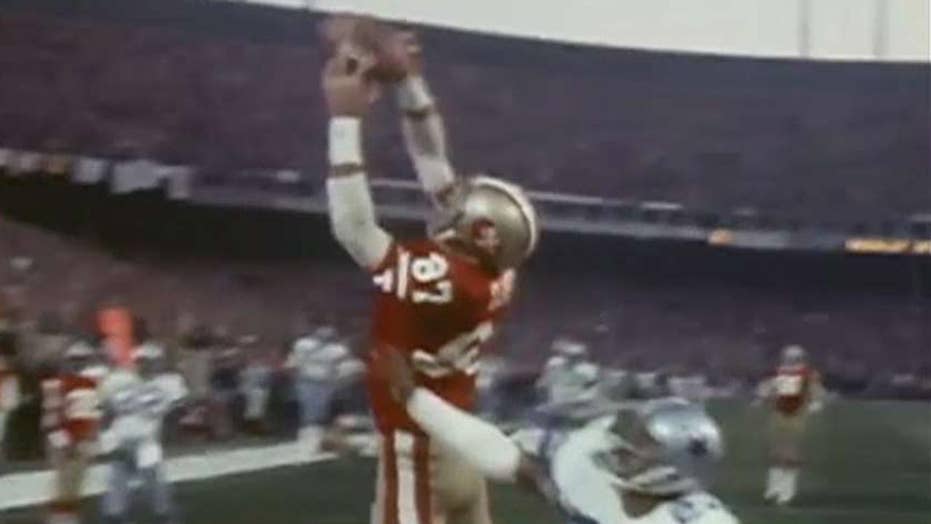 Dwight Clark, the NFL 49ers legend who died last month after a battle with Lou Gehrig’s disease, was laid to rest on the team’s former owner’s Montana ranch right next to the goalpost used in the game where he brought down his famous catch.

"NFL fans will probably recognize this goalpost right here," former 49ers coach Steve Mariucci said in a video posted on Twitter. "That was the goalpost that was in the end zone of 'The Catch' at Candlestick when Dwight Clark beat the Dallas Cowboys on a throw by Joe Montana. And this is Dwight Clark's stone in proximity to where he did make that catch."

Clark died last month, 15 months after he announced he had been diagnosed with amyotrophic lateral sclerosis (ALS), also known as Lou Gehrig's disease. He was 61.

A two-time Pro Bowler, Clark played for nine years with the San Francisco 49ers and became known as one of quarterback Joe Montana's most reliable receivers. But his career was defined by a play known simply as "The Catch."

With less than a minute to play in the 1981 NFC Championship Game, the 49ers trailed Dallas 27-21. Facing a third down at the Dallas 6, Montana rolled out to his right and lofted a pass that appeared to be sailing out of bounds.

Clark leaped up in the back of the end zone and hauled in the pass with his fingertips, giving the 49ers a 28-27 win and sending the franchise to its first-ever Super Bowl. Two weeks later, the 49ers won the first of their five championships by defeating the Cincinnati Bengals, 26-21.

The San Francisco Chronicle reported that Clark was buried at Eddie DeBartolo Jr.’s Montana ranch. He was the former team’s owner.