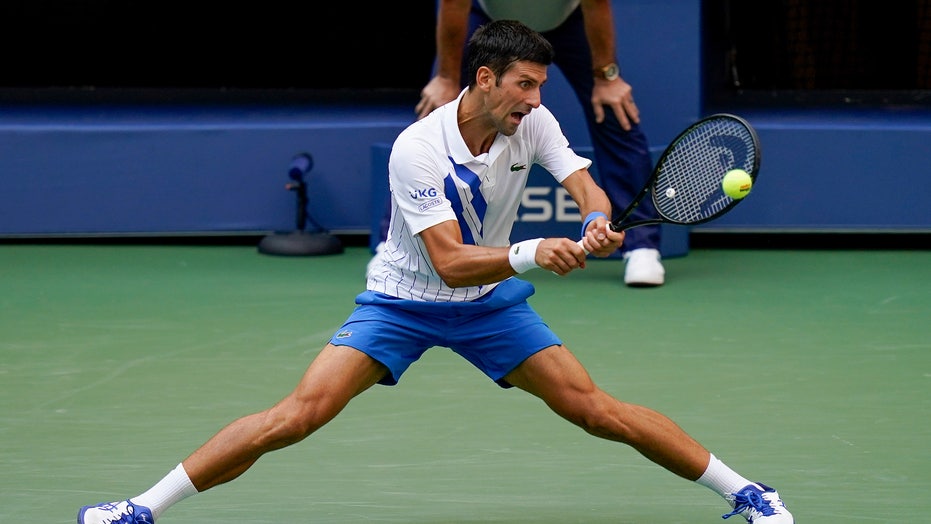 Top-seeded Novak Djokovic was defaulted from his fourth-round match at the U.S. Open after he accidentally hit a line judge in the neck with a tennis ball Sunday.

It was a stunning end to Djokovic’s bid for an 18th Grand Slam title and his 26-0 start to this season.

With 2019 champion Rafael Nadal and Roger Federer not in the field this year, Djokovic arrived in New York as the overwhelming favorite.

But it all came apart Saturday at Arthur Ashe Stadium, when Djokovic had just lost a game to his opponent, Pablo Carreno Busta, to fall behind 6-5 in the first set.

As he walked to the sideline for the changeover, Djokovic smacked a ball behind him. The ball hit a line judge, who dropped to her knees at the back of the court and reached for her neck.

After a discussion of several minutes with officials on court, including tournament referee Soeren Friemel, Djokovic walked over to shake hands with Carreno Busta. Chair umpire Aurelie Tourte then announced the default.

It was apparent Djokovic did not intend to hit the line judge; he wasn't looking in that direction when his racket made contact with the ball and there was concern written on his face as soon as he realized what happened.

But players who hit a ball out of anger and make contact with an on-court official have been defaulted in the past.

2020 US OPEN: WHAT TO KNOW ABOUT MEN'S SINGLES TOURNAMENT

In 2017, for example, Denis Shapovalov — the 21-year-old Canadian scheduled to play his fourth-round match Sunday night — was defaulted from a Davis Cup match against Britain when he accidentally hit the chair umpire in the face with a ball.

At Wimbledon in 1995, Tim Henman hit a ball into the head of a ball girl and was defaulted from a doubles match with partner Jeremy Bates.

“I think the supervisors and all them are just doing their job, but very unlucky for Novak,” said Alexander Zverev, the tournament's No. 5-seeded man, who reached the quarterfinals by winning Sunday. “If it would have landed anywhere else — we’re talking a few inches — he would have been fine.”

Among the many oddities about the 2020 U.S. Open, the first Grand Slam tournament since the outset of the coronavirus pandemic, is that there are no spectators.

SERENA WILLIAMS SETS UP US OPEN SHOWDOWN VS. SLOANE STEPHENS

Another is that only the two largest arenas — Ashe and Louis Armstrong Stadium — have full complements of line judges making calls at matches. At other courts, chair umpires are aided by an electronic line-calling system.

Djokovic’s mood had soured over the preceding few minutes Sunday. In the prior game, he wasted three consecutive break points and after the last, which Carreno Busta won with a drop shot, Djokovic whacked a ball off a courtside advertising sign.

Then, on the second point of what would become the last game at this year’s U.S. Open for Djokovic, he stumbled while chasing a shot and fell to the ground, clutching his left shoulder.

Play was delayed for a few minutes while a trainer checked that shoulder.

On the second point after they resumed, Carreno Busta hit a passing winner to break Djokovic’s serve.

That’s when Djokovic got himself into trouble.

His departure means there is no man remaining in the field who previously has won a Grand Slam singles title. Whoever emerges as champion will be the first first-time major trophy winner in men’s tennis since 2014, when Marin Cilic won the U.S. Open.

Plus, each of the last 13 Grand Slam trophies had been won by a member of the Big Three of Federer, Nadal and Djokovic.