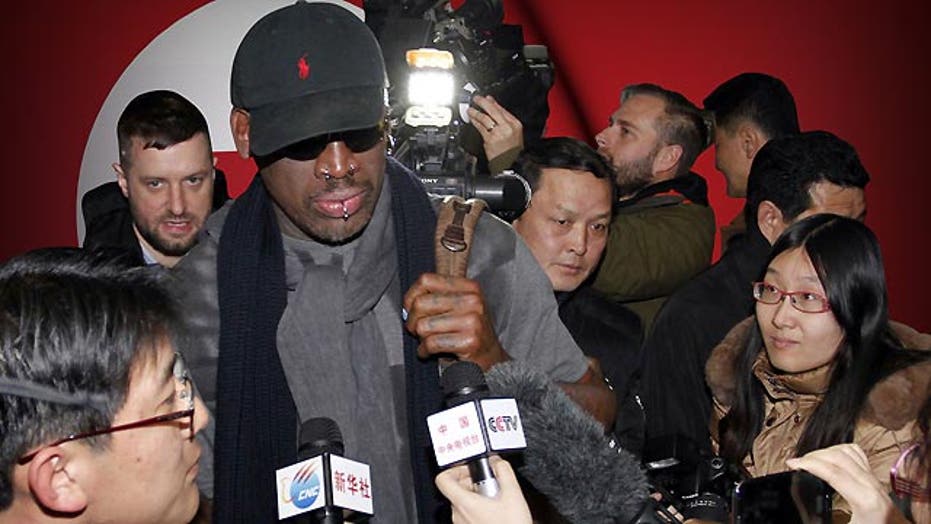 The American known as "The Worm" is set to arrive Tuesday in Pyongyang, becoming an unlikely ambassador for sports diplomacy at a time of heightened tensions between the U.S. and North Korea.

Rodman, three members of the Harlem Globetrotters basketball team, a VICE correspondent and a production crew from the company are visiting North Korea to shoot footage for a new TV show set to air on HBO in early April, VICE told The Associated Press in an exclusive interview before the group's departure from Beijing.

It's the second high-profile American visit this year to North Korea, a country that remains in a state of war with the U.S. It also comes two weeks after North Korea conducted an underground nuclear test in defiance of U.N. bans against atomic and missile activity.

Google's executive chairman, Eric Schmidt, made a surprise four-day trip to Pyongyang, where he met with officials and toured computer labs in January, just weeks after North Korea launched a satellite into space on the back of a long-range rocket.

Washington, Tokyo, Seoul and others consider both the rocket launch and the nuclear test provocative acts that threaten regional security.

North Korea characterizes the satellite launch as a peaceful bid to explore space, but says the nuclear test was meant as a deliberate warning to Washington. Pyongyang says it needs to build nuclear weapons to defend itself against the U.S., and is believed to be trying to build an atomic bomb small enough to mount on a missile capable of reaching the mainland U.S.

VICE said the Americans hope to engage in a little "basketball diplomacy" in North Korea by running a basketball camp for children and playing pickup games with locals -- and by competing alongside North Korea's top athletes for a game Rodman said he hopes leader Kim Jong Un will attend.

"Is sending the Harlem Globetrotters and Dennis Rodman to the DPRK strange? In a word, yes," said Shane Smith, the VICE founder who is host of the upcoming series. "But finding common ground on the basketball court is a beautiful thing.

"These channels of cultural communication might appear untraditional, and perhaps they are, but we think it's important just to keep the lines open," he said. "And if Washington isn't going to send their Generals then we'll send our Globetrotters."

The Washington Generals were the Globetrotters' regular, long-suffering opponents in a long-running series of comic exhibition games. DPRK is an acronym of North Korea's formal name, the Democratic People's Republic of Korea.

VICE, known for its sometimes irreverent journalism, has made two previous visits to North Korea, coming out with the "VICE Guide to North Korea." The HBO series, which will air weekly starting April 5, features documentary-style news reports from around the world.

The Americans also will visit North Korea's national monuments, the SEK animation studio and a new skate park in Pyongyang.

The U.S. State Department hasn't been contacted about travel to North Korea by this group, a senior administration official said, requesting anonymity to comment before any trip had been made public. The official said the department does not vet U.S. citizens' private travel to North Korea and urges US citizens contemplating travel there to review a travel warning on its website.

In a now-defunct U.S.-North Korean agreement in which Washington had planned last year to give food aid to Pyongyang in exchange for nuclear concessions, Washington had said it was prepared to increase people-to-people exchanges with the North, including in the areas of culture, education and sports.

But the often over-the-top Rodman, with his maze of tattoos, nose studs and neon-bleached hair, seems like an unlikely diplomat to a country where male fashion rarely ventures beyond military khaki and growing facial hair is forbidden.

During his heyday in the 1990s, Rodman was a poster boy for excess. He called his 1996 autobiography "Bad as I Wanna Be" -- and showed up wearing a wedding dress to promote it.

Shown a photo of a snarling Rodman, piercings dangling from his lower lip and two massive tattoos emblazoned on his chest, one North Korean in Pyongyang recoiled and said: "He looks like a monster!"

But Rodman is also a Hall of Fame basketball player and one of the best defenders and rebounders to ever play the game. During a storied, often controversial career, he won five NBA championships -- a feat that quickly overshadowed his antics for at least one small North Korean group of basketball fans.

Along with soccer, basketball is enormously popular in North Korea, where it's not uncommon to see basketball hoops set up in hotel parking lots or in schoolyards. It's a game that doesn't require much equipment or upkeep.

The U.S. remains Enemy No. 1 in North Korea, and North Koreans have limited exposure to American pop culture. But they know Michael Jordan, a former teammate of Rodman's when they both played for the Chicago Bulls in the 1990s.

During a historic visit to North Korea in 2000, then-Secretary of State Madeleine Albright presented Kim Jong Il, famously an NBA fan, with a basketball signed by Jordan that later went on display in the huge cave at Mount Myohyang that holds gifts to the leaders.

North Korea even had its own Jordan wannabe: Ri Myong Hun, a 7-foot-9 star player who is said to have renamed himself "Michael" after his favorite player and moved to Canada for a few years in the 1990s in hopes of making it into the NBA.

Even today, Jordan remains well-loved here. At the Mansudae Art Studio, which produces the country's top art, a portrait of Jordan spotted last week, complete with a replica of his signature and "NBA" painted in one corner, seemed an odd inclusion among the propaganda posters and celadon vases on display.

An informal poll of North Koreans revealed that "The Worm" isn't quite as much a household name in Pyongyang.

But Kim Jong Un, also said to be a basketball fanatic, would have been an adolescent when Rodman, now 51, was with the Bulls, and when the Harlem Globetrotters, an exhibition basketball team, kept up a frenetic travel schedule worldwide.

In a memoir about his decade serving as Kim Jong Il's personal sushi chef, a man who goes by the pen name Kenji Fujimoto recalled that basketball was the young Kim Jong Un's biggest passion, and that the Chicago Bulls were his favorite.

The notoriously unpredictable and irrepressible Rodman said he has no special antics up his sleeve for making his mark on one of the world's most regimented and militarized societies, a place where order and conformity are enforced with Stalinist fervor.

But he said he isn't leaving any of his piercings behind.