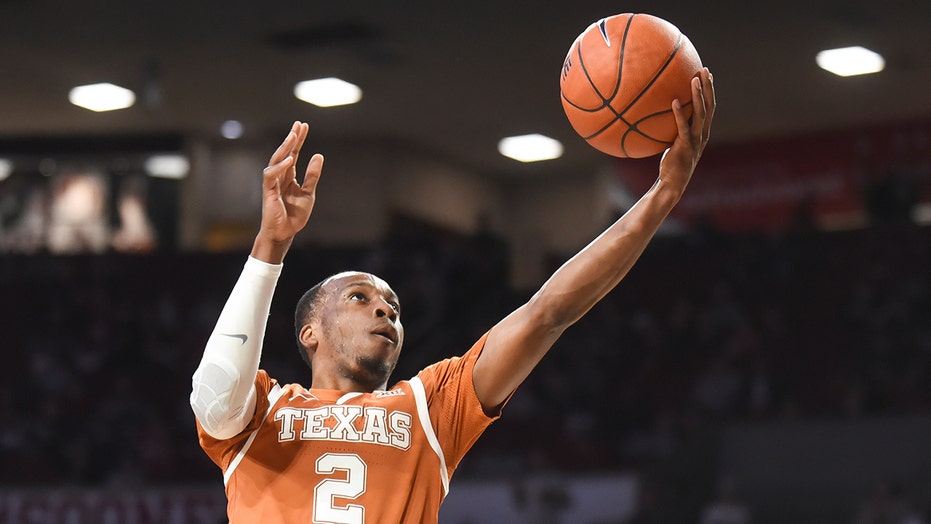 Texas’ Matt Coleman III looked over at teammate Royce Hamm Jr. in the final seconds of Tuesday’s game at Oklahoma.

“Royce, I’m about to win this,” Coleman said.

Coleman banked in a 3-pointer just before the buzzer to lift the Longhorns to a 52-51 win over the Sooners.

A year ago against the Sooners on the road, Coleman had a chance to be the hero, before Jamal Bieniemy extended and blocked Coleman’s potential winner at the buzzer to preserve Oklahoma’s win.

This time, Coleman wasn’t about to be stopped, even if he needed some help to get there.

After the second of those, Coleman looked at Hamm and made his fateful prediction.

Brock Cunningham grabbed the rebound, he quickly handed the ball to Coleman, who never hesitated. He ran in between Oklahoma’s Austin Reaves and Bieniemy and elevated, letting fly a high, arcing shot that went off the backboard and through with 0.4 seconds remaining to extend the Longhorns’ win streak to five.

The previous four games in Texas’ winning streak had been comfortable at the end for Texas, with each coming by double figures. But there was never much comfort on either side Tuesday, with neither team leading by more than six at any point.

It was a struggle for both teams offensively throughout as they combined to shoot less than 31%.

“Obviously nothing I can say or do in the locker room to change what our guys feel any better,” Sooners coach Lon Kruger said. “It was tough all night long. Our guys weren’t making shots. They fought back and got over the hump, but we still didn’t get the result we wanted.”

Despite his shooting struggles throughout the night, it looked like Brady Manek was going to be the hero for Oklahoma.

His block of Courtney Ramey’s driving layup attempt and rebound sent him to the free-throw line for a pair that put the Sooners up by three with 26 seconds remaining.

But Coleman cut the lead to one and then Manek missed 1 of 2 free throws to keep the door open.

Coleman missed a chance to tie it before Doolittle’s misses gave Texas one chance — and Coleman capitalized.

“That was all him,” Texas coach Shaka Smart. “It was a very imperfect game. Stats were ugly. Our guys showed resolve and toughness. We had guys going out with blood and even had one receive stitches on the bench.

“That was all him. Very imperfect game, but their resolve and toughness was phenomenal.”

Texas: The Longhorns continued their improbable climb up the conference standings and kept alive their chances to earn the No. 3 seed in next week’s Big 12 Tournament. Texas looked like a long-shot to be in contention for an at-large berth in the NCAA Tournament before this win streak began but is looking more and more like a tournament team.

Oklahoma: The Sooners’ chances at the No. 3 seed in the Big 12 Tournament appear to have slipped away. Oklahoma still figures to be in the NCAA Tournament but will need a win Saturday— and potentially at least in the first-round of the conference tournament — to feel secure.

Hamm and Brock Cunningham each had 11 rebounds for the Longhorns.

Texas wraps up its regular season at home Saturday against Oklahoma State. The Longhorns beat the Cowboys 76-64 on the road Jan. 15.

Oklahoma finishes up its slate at TCU the same day. The Sooners beat the Horned Frogs 83-63 at home Jan. 18 and have won five straight against TCU.