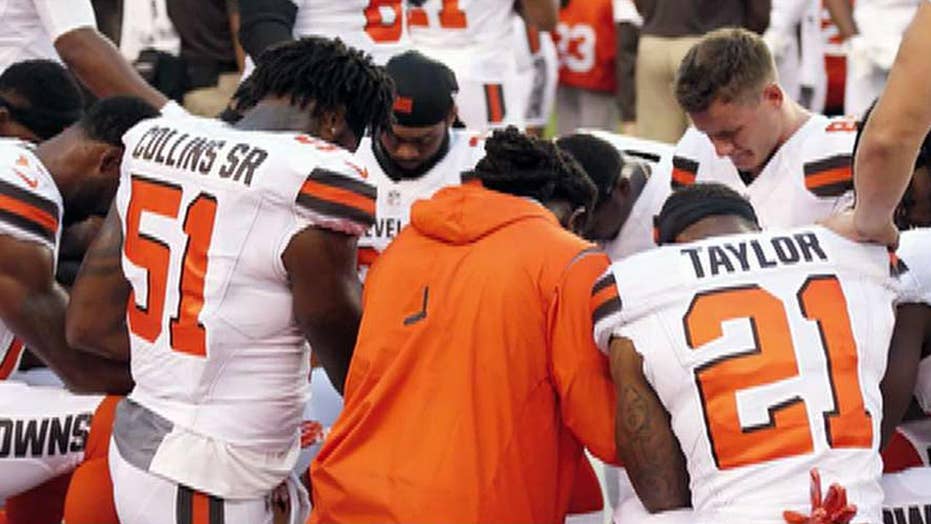 More than a dozen members of the Cleveland Browns knelt during the national anthem Monday, continuing the controversial trend that began with now-jobless quarterback Colin Kaepernick last season and has only grown throughout the NFL.

The group, which included veterans, rookies, starters and backups, gathered in front of some water coolers and behind their teammates who huddled on the sideline to pray as a silent protest during the national anthem before the preseason game against the New York Giants.

Following a deadly protest against white nationalists in Charlottesville, Va. on Aug. 12, Browns tight end Seth DeValve said the players felt compelled to use their platform to make a difference.

"I wanted to take the opportunity with my teammates during the anthem to pray for our country," said DeValve, one of two white players to participate. "And also to draw attention to the fact that we have work to do. And that's why I did what I did."

Colin Kaepernick, center, kneeled during the national anthem before an NFL game against the Dallas Cowboys. (AP)

The protest was the largest of its type in NFL history after the trend was started by Kaepernick, then the San Francisco 49ers quarterback, who knelt for "The Star Spangled Banner" before a preseason game in 2016. Kaepernick said he was protesting because "I am not going to stand up to show pride in a flag for a country that oppresses black people and people of color."

"To me, this is bigger than football and it would be selfish on my part to look the other way," he said at the time. "There are bodies in the street and people getting paid leave and getting away with murder."

In recent days, Seattle defensive lineman Michael Bennett and Philadelphia defensive back Malcolm Jenkins also have called attention to what they feel is racial injustice in the country.

Oakland Raiders running back Marshawn Lynch also has sat during the national anthem in the preseason, but hasn't elaborated on his reasoning.

"We respect our players; we respect the flag," Jackson said following Cleveland's 10-6 win. "Those guys came to me and talked to me about it before they ever made a decision to do it. That is the way we feel about it, and we have talked about this. I said at some point in time, they may, and they have. I won't know about the next game until it happens, but again, this was tonight and we will move on from there."

DeValve said he and his teammates have had several discussions about recent racial tensions and other social issues. He did not want to offend anyone with his protest.

"It saddens me that in 2017 we have to do something like that," he said. "I personally would like to say that I love this country. I love our national anthem, I'm very grateful to the men and women who have given their lives and give a lot every day to this country and to serve this country, and I want to honor them as much as I can.”

He added: "The United States is the greatest country in the world. It is because it provides opportunities to its citizens that no other country does. The issue is that it doesn't provide equal opportunity to everybody. And I wanted to support my African-American teammates today who wanted to take a knee. We wanted to draw attention to the fact that there's things in this country that still need to change. I myself will be raising children that don't look like me, and I want to do my part as well to do everything I can to raise them in a better environment than we have right now."