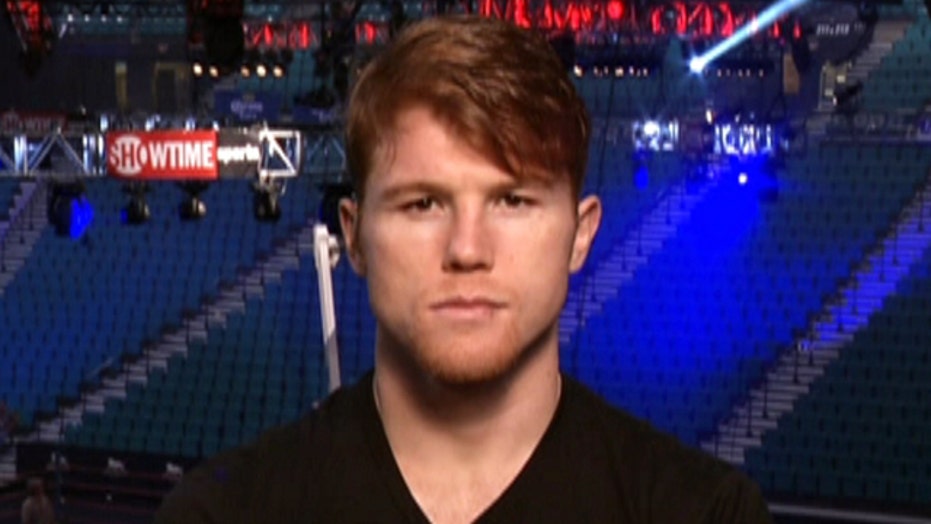 Canelo Alvarez on the big fight against Mayweather Jr.

"I think he is one of those fighters that will demand all of my potential and it will take everything I have," Alvarez said to FNL, admitting he has never fought to his full potential. "I think he will make me think a lot. I think he’s going to see the best of Canelo this Saturday."

At just 23 years old, the freckle-faced Mexican fighter nicknamed Canelo has mastered the moves of a star. He usually handles his skyrocketing celebrity with calm and poise, always coming off as a hungry, serious athlete who cares little for his sport's near-requisite bragging and boasting.

Just three years after the Mexican junior middleweight champion's first major U.S. fight, Alvarez (42-0-1, 30 KOs) will be under his sport's biggest spotlight Saturday night in Las Vegas when he faces Floyd Mayweather Jr., the biggest star of them all.

Just 48 hours before the bout, Alvarez said he was aware of reports stating that Mayweather's father, Floyd Mayweather Sr., had infiltrated a spy or spies in his camp.

"If he has spies in the camp let him have them, there is no problem," Alvarez said to FNL. "It doesn’t interest me. They can watch me train, but once I’m fighting in the ring it’s a different thing."

Alvarez went on to say, "We don’t need to spy. Believe me, we are not like that. We just do our jobs."

Mayweather Sr. said he had inside information that Alvarez was struggling to maintain his weight at the 152 pound limit, a charge Alvarez denied. He is naturally bigger than Mayweather, who easily could have more than a 10-pound weight disadvantage on the fight night against Alvarez after the Mexican star rehydrates from the 152-pound limit.

"No, I’m having no difficulties with my weight," he said. "I feel very comfortable. I am eating well."

The fight will be missing Oscar De La Hoya, who co-promotes Alvarez and is his biggest cheerleader. De La Hoya admitted himself to rehab earlier in the week.

"He told me about his problem the morning he checked himself into rehab," Alvarez explained to FNL. "And I told him 'have courage - have courage. You have to win that fight because it’s the most important fight of your life. Don’t worry about us, we will win'."

In return, De La Hoya shared some secrets with his protegé on how to beat a fighter who defeated him in a narrow split decision in 2007.

Alvarez said De La Hoya told him to use the jab and use it constantly. He also stressed the mental part of fighting, telling him to not allow anything to bother him in the ring or out.

Alvarez prepared for the bout in high-altitude Big Bear, CA., following the example of countless fighters who have taken themselves away from celebrity distractions by going up into the San Bernardino Mountains. He worked out in a Spartan, one-ring boxing gym in the converted garage of a house owned by Sugar Shane Mosley, the long-reigning champion who has lost to both men in Saturday's bout.

While Alvarez worked out with trainer Chepo Reynoso and a retinue of coaches, his brothers and assorted hangers-on, the gym stereo blaring doo-wop, 12-bar blues and '60s bubble-gum pop records. Ranchera and hip-hop, the dual staples of many modern boxers, don't make the playlist until later in the workout.

Alvarez is still too young to be afraid of trying new things. For the first time in his career, he prepared for Mayweather by hiring a strength coach, a nutritionist and a chef.

"I think we're putting together a good game plan to beat Mayweather, and up here we have no distractions," Reynoso said through a translator to the Associated Press. "We worked harder than ever for this fight. I can't explain it now, but you're going to see the results."

Alvarez betrays no real mental weaknesses in his preparations for Mayweather — only a quiet confidence, and no overcompensation for the daunting task in front of him. Instead, he quietly agrees with Reynoso about his advantages, insisting he can do things nobody has ever done against Mayweather.

Canelo is an accurate puncher carrying more power than most of Mayweather's previous opponents. His percussive right hand is among the most dangerous weapons in boxing — as several injured sparring partners could attest this summer.

But Alvarez's most important asset, he believes, is his mind.

"A lot of people get impatient and try to take their head off," Alvarez said to the Associated Press. "That's when they start missing punches, and that's when Floyd can beat you with counterpunches. I'm not going to fall into that. I already know that's what he wants you to do."