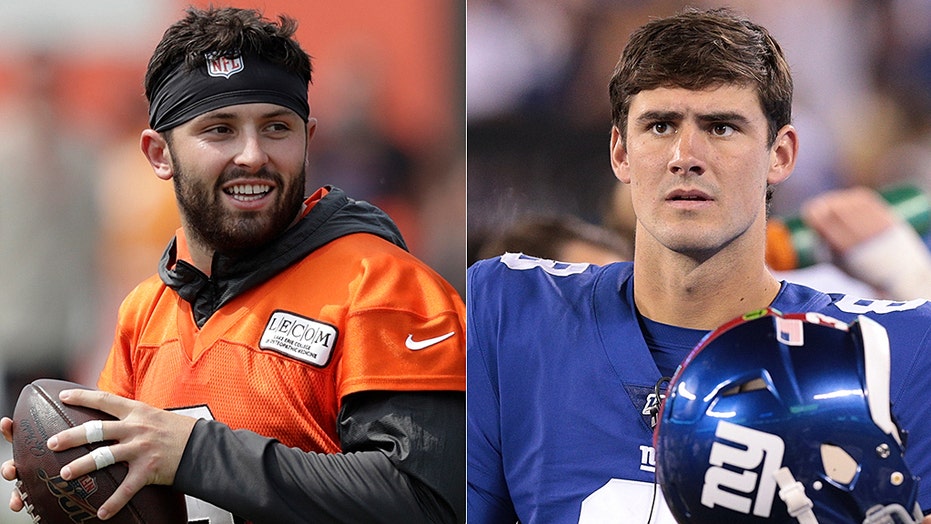 In one portion of the GQ story published Tuesday, Mayfield is watching a “Sportscenter” segment about the Giants when he recalls his shock at the team's selection of Jones with the No. 6 pick in the 2019 NFL Draft (an emotion that plenty of Giants fans felt, too).

“It blows my mind,” Mayfield said.

When it's noted there's no exact science to predict which college quarterbacks will transition well to the NFL, Mayfield replies, “Some people overthink it."

Mayfield’s comments drew plenty of backlash (especially among New Yorkers) on social media and the second-year player took to Barstool Sports’ Instagram comments section to slam his portrayal in the GQ article.

“This is not what I said … just so we’re clear,” Mayfield wrote. “I also said I was surprised I got drafted number one. Then was talking about the flaws in evaluating QB’s. Where I brought up winning being important. Reporters and media will do anything to come up with a click bait story. Heard nothing but good things and wish nothing but the best for Daniel.”

Jones had a chance to respond to Mayfield and was asked about the Oklahoma product’s comments, but the former Duke quarterback took the high road.

“I think there’s a lot of things that motivate me before something like that would,” Jones said, according to the New York Post. “I think I’m a very passionate person. I don’t always show it.”

“He’s in a long line of people that criticized that move,” Shurmur said. “That’s his business. And if I were Dan, I wouldn’t even address it, just like he hasn’t addressed all his other critics."

Shurmur added: “The one thing about Dan is, don’t confuse calm and composed for a guy that’s competitive and a winner. I’m fond of the phrase ‘still waters run deep.’ So that’s what I think of Dan.”