Amelia Gapin, a trangender woman, works out while preparing to run the Boston Marathon. (AP)

At least five openly transgender women are set to run in next week’s Boston Marathon, raising questions on whether they have an unfair physical advantage or if they are keeping other women from qualifying for the storied race.

In 1967, a Boston Marathon official nearly dragged a woman off the course after she managed to enter the men's-only race, but now, five decades later, race officials are publicly stating transgender runners can compete using the gender they identify with.

"We take people at their word. We register people as they specify themselves to be," Tom Grilk, chief of the Boston Athletic Association, told the Associated Press. "Members of the LGBT community have had a lot to deal with over the years, and we'd rather not add to that burden." 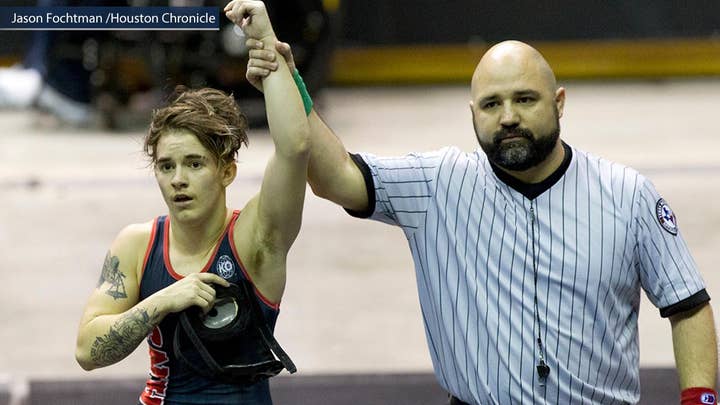 There is a debate, however, about whether or not transgender women, who are born as biological males, have an edge in the competition.

Bob Girandola, an associate professor in the Department of Human Biology at the University of Southern California, told the Boston Herald it could an issue if transgender runners are producing higher levels of testosterone.

“If they still have male gonads, they will have an advantage over other women — there is no way around that,” he said. “It gives them an unfair advantage. Maybe they have to have a separate category if they’re going to do that. It’s a dilemma.”

April 17, 2017: Runners cross the starting line at the 121st running of the Boston Marathon. (Reuters)

But for trans women who do lower their testosterone levels, medical experts told the Associated Press there's no evidence of an athletic advantage.

"That's a misconception and a myth," said Dr. Alex Keuroghlian, director of education and training programs at the Fenway Institute, a health and advocacy center for the Boston LGBT community. "There's no physiologic advantage to being assigned male at birth."

Rather, trans women who take medication to lower their testosterone levels often face side effects such as dehydration, sluggishness and reduced stamina — which can all spell disaster for marathon training, the Associated Press reported.

Although the five transgender women who signed up to run the 26.2-mile race through Boston and its suburbs on April 16 aren't the first, their presence is helping bring clarity to the race's stance on transgender runners.

In the past, it was uncertain how they would be treated. Some simply signed up and ran, while some were too afraid to try, said Amelia Gapin, a transgender woman from Jersey City, New Jersey, who is registered for this year's race.

"It's kind of murky how people handle it," said Gapin, who also leads a social media group for trans runners. "We are such a small percentage of the population that we generally just fly under the radar."