The game at Nationals Park in Washington, D.C., was the sixth straight win for the junior circuit.

Houston's Alex Bregman and George Springer smacked back-to-back shots in the top of the 10th to put the AL in the lead for good.

Bregman was named the game's Most Valuable Player.

Cincinnati's Joey Votto homered in the bottom of the frame but it was not enough.

Earlier, Cincinnati's Scooter Gennett sent the game into extra innings with a two-run shot in the bottom of the ninth after Seattle's Jean Segura smacked a three-run blast in the top of the eighth to put the AL in front 5-2.

Segura's blast off Milwaukee pitcher Josh Hader came after Colorado's Trevor Story had homered in the bottom of the seventh to draw the National League even at 2-2.

It also came after Votto errored at first base to give Segura another swing. Votto dropped a foul popup along the NL dugout railing with runners on first and second and a 3-2 count on Segura, who launched the next pitch over the left-field wall.

Previously, Aaron Judge of the New York Yankees and Mike Trout of the Los Angeles Angels hit solo home runs to put the junior circuit in the lead.

Nationals ace Max Scherzer started the game for the NL and worked a scoreless first inning, but did not emerge unscathed after facing Judge to lead off the second. The New York Yankees star turned around a 95-mph fastball and deposited it into the left-field bullpen for the first run of the game. 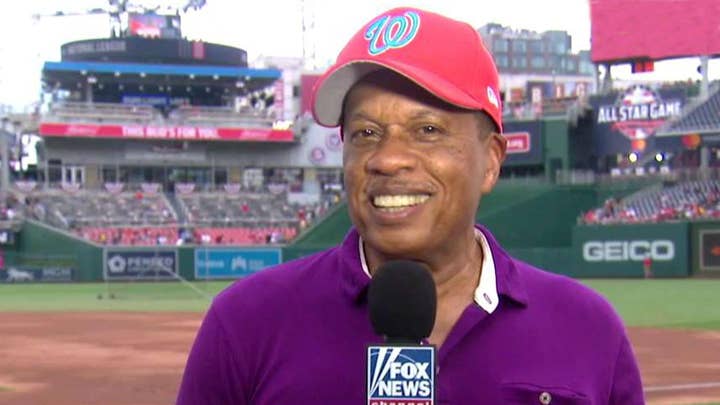 After Trout made the score 2-0 for the AL, Cubs catcher Willson Contreras got one of the runs back with a solo shot off Blake Snell of the Tampa Bay Rays leading off the bottom of the third.

Contreras became the 19th player to hit a home run in his first All-Star at-bat, joining the likes of Johnny Bench, Bo Jackson and David Ortiz.

Contreras’ blast provided the last of the scoring as the American League took the overall lead in the series, 44-43-2.

The first All-Star Game to hit the nation's capital since 1969 opened with plenty of patriotic pomp, but with no sign of President Donald Trump, who did not attend the game a day after he drew bipartisan criticism for siding with Russian President Vladimir Putin over Russian meddling in the 2016 election.

Combat medic James McCloughan, one of 30 Medal of Honor recipients honored before the game, threw out the first pitch. After serving in Vietnam, McCloughan spent 38 years as a high school baseball coach in Michigan.

Presidents Franklin D. Roosevelt (1937) and John F. Kennedy (1962) threw out the first pitches at previous All-Star games in Washington during their terms. Vice President Spiro Agnew did the honors in 1969 after the game was postponed one day by rain, while Dwight D. Eisenhower was prevented from opening the 1956 game while recovering from surgery.