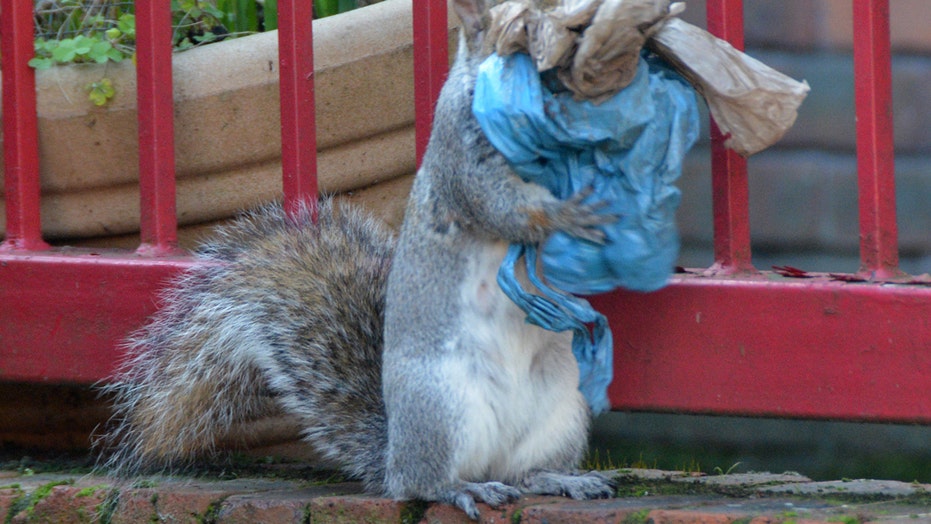 A photographer has taken startling pictures of a squirrel appearing to use plastic bags in an effort to build a nest.

Henry Jacobs captured the images while walking along the Lee Valley Navigational Canal, in the London Borough of Haringey, British news agency South West News Service (SWNS) reports. Upon seeing the squirrel exhibit "odd" behavior of going through the plastic scraps it was carrying before scurrying off, Jacobs knew he had to capture the moment.

"When I first saw it, I didn't know what I was looking at," Jacobs said in an interview. "I knew it was an animal, but I genuinely couldn't work out what animal it was for the first few seconds. It was a very unusual sight. I thought, 'What is it doing with that? Why would it want plastic?' It looked very odd."

These pictures are believed to be the first evidence of a new phenomenon - of squirrels using plastic bags to build a nest. (Credit: SWNS)

In 2018, scientists discovered that squirrels had been using plastic waste to build their nests, SWNS reported.

Jacobs added that it was a "real shame" to see the mammal with the pollution in its grasp in an effort to build its nest. "It's a real shame that people want to spoil the environment by throwing rubbish about," the 73-year-old said. "Why people can't just take their rubbish home and put it in the bin, I don't understand. I just think it's such a shame."

The rodent is seen on its hind legs seemingly struggling under the bulk of the bags it is carrying in its two forelimbs. It can barely see where it is going through the plastic scraps it is carrying - before transferring them into its jaws and scurrying off. (Credit: SWNS)

Plastic pollution, which could cost the world's economy as much as $2.5 trillion, is impacting various species in different ways, including death.

A pregnant whale off the coast of Italy was found dead with 49 pounds of plastic in its stomach in April 2019. Researchers in the Philippines witnessed a similar occurrence after they pulled 88 pounds of plastic bags from the stomach of a dead whale that became stranded on a beach.

A similar case happened in November 2018 when park rangers pulled 13 pounds of plastic from a dead whale in Indonesia.

Green turtles are also being negatively impacted, according to a study published in August 2019 said the reptiles were at risk of death from the plastic floating in the oceans because they think it is food.

PLASTIC IS 'RAINING' ON THE ROCKY MOUNTAINS, STUDY SAYS

A separate study published in May 2019 said that plastic pollution in oceans could actually be suffocating the planet – by harming the tiny microorganisms that are "thought to be responsible for up to 10 percent of ... total global oxygen production."

According to a 2018 estimate from EarthDay.org, 8 million metric tons of plastic wind up in the ocean every year, including 236,000 tons of microplastics, pieces that break down that are smaller than a human fingernail.

Some estimates have suggested there may be as many as 5.25 trillion macro and microplastic pieces floating in the ocean, many of which wind up in the digestive tracks of sea animals, such as dolphins, whales and turtles.