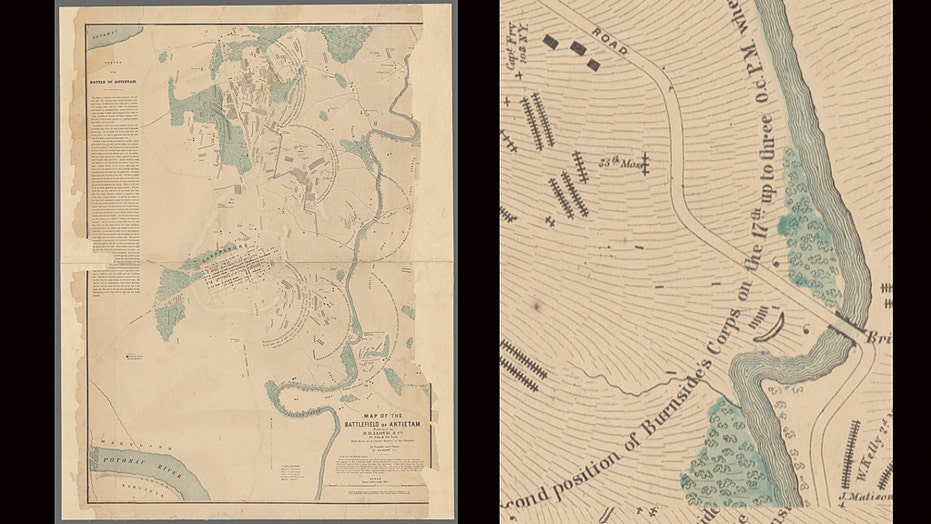 A long-forgotten Civil War map has recently been rediscovered, shedding new light on the bloody aftermath of the battle of Antietam.

Some 23,000 soldiers were killed, wounded or missing following the battle on Sept. 17, 1862, which has been described as “the bloodiest day in American history.”

The S.G. Elliott Burial Map shows where 5,800 Americans were buried in temporary graves. The map, which is in the collection of the New York Public Library, was discovered by researchers looking for information on the battle of Gettysburg.

The map was digitized two years ago, but until its recent discovery in the library’s archives, it was unknown to experts. Earlier this year, researchers from the Adams County Historical Society in Gettysburg, Pa., found the map when they were looking for information on mapmaker Simon G. Elliott.

The S.G. Elliott Burial Map shows where 5,800 Americans were buried in temporary graves.

The detailed map, like a counterpart that Elliott made following the battle of Gettysburg, was likely made in autumn 1864. “Although historians are still performing analysis of the map, more than 5,800 soldier burials are individually recorded, typically in groups associated with a particular regiment, also noted on the map,” explains the American Battlefield Trust, in a statement. “Field burials often saw soldiers interred by comrades, very close to where they fell, meaning that the map confirms the locations where units were engaged on the field.”

Whereas 18 soldiers were identified by name on Elliott’s Gettysburg map, more than 50 were identified on the Antietam map, according to ACHS Executive Director Andrew Dalton.

“Looking at this map, there can be no doubt in the truth of the statement that a battlefield is ‘hallowed ground,’ made so by the blood of soldiers,” said American Battlefield Trust President Jim Lighthizer in a statement. “The landscape at Antietam was turned into one vast cemetery, sacred to the memory of those who lost their lives in the struggle.”

Although most of the interments have been moved off the battlefield to Antietam National Cemetery, the map is nonetheless an incredible historical document.

The map is believed to be from autumn 1864. (New York Public Library)

Antietam was a crucial battle in the Civil War, ending the Confederate Army of Northern Virginia’s first invasion of the North. President Abraham Lincoln also issued the preliminary Emancipation Proclamation in the wake of the bloody clash.

The map effectively unlocks new aspects of the battle and its aftermath.

“This discovery reveals truths about the Battle of Antietam lost to time,” said American Battlefield Trust Chief Historian Garry Adelman in the statement. “It’s like the Rosetta Stone: by demonstrating new ways that primary sources already at our disposal relate to each other, it has the power to confirm some of our long-held beliefs — or maybe turn some of our suppositions on their heads.”

Civil War sites across the U.S. regularly offer fresh glimpses into the bloody conflict. Earlier this year, for example, an artillery shell from the Civil War was discovered in downtown Charleston.

A Civil War-era gravestone linked to the infamous Quantrill’s Raid was discovered last year in a Kansas forest.

Also in 2019, a Civil War cannonball was discovered lodged in a walnut tree at a historic house in Independence, Mo.

Nov. 6, 2011: Antietam National Battlefield in Sharpsburg, Md., is a serene setting once wracked by violence in the bloodiest one-day battle on U.S. soil - file photo. (The Associated Press)

Earlier in the year, archaeologists in Delaware located the gravestone of a Civil War soldier that may provide a vital clue in uncovering a long-lost African-American cemetery.

In 2018, the remains of two Civil War soldiers were discovered in a surgeon’s burial pit at Manassas National Battlefield Park in Virginia. Also in 2018, a vacationer on a North Carolina beach captured drone footage of a Civil War-era shipwreck.

In 2017, forensic linguists said they had likely unraveled the mystery surrounding a famous Civil War-era letter long believed to have been written by Lincoln.

The last person to receive a Civil War-era pension died in North Carolina last month, according to reports.

Fox News’ Madeline Farber and The Associated Press contributed to this article.