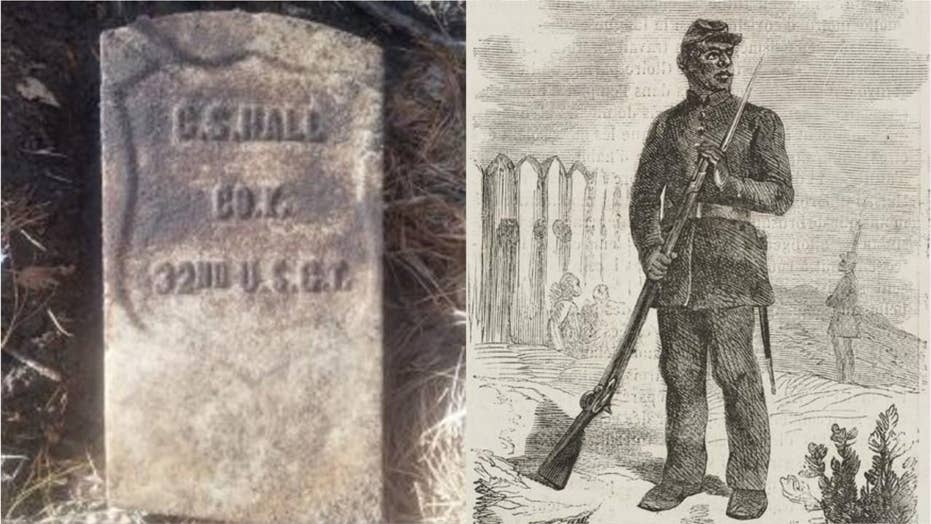 Archaeologists have discovered a Civil War soldier's gravestone, which may offer a vital clue to a long-lost African-American cemetery.

Archaeologists in Delaware have discovered the gravestone of a Civil War soldier that may provide a vital clue in uncovering a long-lost African-American cemetery.

Working under the guidance of the Delaware State Historic Preservation Office, archaeologists hired by the private landowner uncovered at least other nine graves at the site, which is known as the Orr Property, or Hall Plantation.

Experts have not yet matched the headstone to a specific grave, and no information is known about the people buried at the site. However, the site is known to the local community as containing the remains of African-Americans that lived in the area, officials say.

“This cemetery is a significant discovery for the community and for all Delawareans who value and appreciate our state’s rich history,” said Tim Slavin, director of the Division of Historical and Cultural Affairs, in the statement. “As work continues at the site, we hope to learn more about those who are interred there, so that they may be properly memorialized and their personal stories retold.”

Slavin praised local neighbors who called attention to the presence of the cemetery. “Their recollections and local knowledge about the site and its location were key to discovering these burials,” he said. “They spoke up, and thanks to them we can add a new page to Delaware history.”

At this stage, the remains of slaves have not yet been confirmed at the site, either through archaeological excavation or analysis of historical records.

Nonetheless, the discovery of the Civil War soldier’s headstone offers an insight into the lives of those buried at the Frankford site.

The 32nd Regiment of the United States Colored Infantry was organized at Camp William Penn in Philadelphia between Feb. 7 to March 7, 1864, according to the National Parks Service. The regiment was ordered to Hilton Head, S.C., the following month and remained there until June 1864, before moving to Morris Island, S.C., where it participated in operations against Charleston. Later that year, the Regiment took part in the Expedition to Boyd’s Neck and the Battle of Honey Hill. In 1865, the 32nd Regiment also participated in the occupation of Charleston.

The unit lost 150 soldiers during the Civil War – two officers and 35 enlisted men were killed or mortally wounded and 113 enlisted men died from disease, according to the National Park Service.

Civil War sites and artifacts from the era regularly offer fresh glimpses into the bloody conflict.

Last year, for example, the remains of two Civil War soldiers were discovered in a surgeon’s burial pit at Manassas National Battlefield Park in Virginia. Also in 2018, a holidaymaker on a North Carolina beach captured drone footage of Civil War-era shipwreck.

In 2017, forensic linguists said they have likely unraveled the mystery surrounding a famous Civil War-era letter, long believed to have been written by President Abraham Lincoln.

In 2015, the remains of a Confederate warship were raised from the Savannah River in Georgia. The following year, the wreck of a large iron-hulled Civil War-era steamer was discovered off the coast of North Carolina. The ship, which was found off Oak Island, N.C, was tentatively identified as the blockade runner Agnes E. Fry.