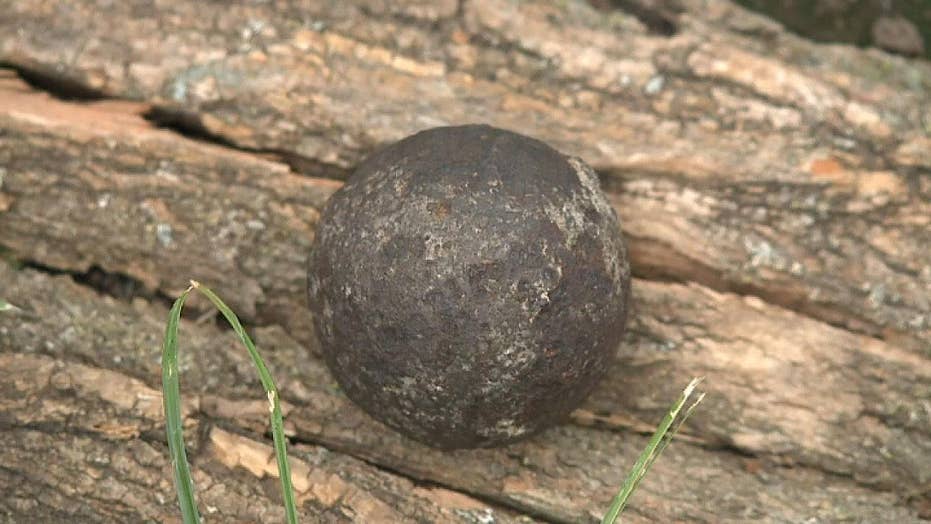 Discovery helps shed light on the Battle of Independence in 1862.

A Civil War cannonball has been discovered lodged in a walnut tree at a historic house in Independence, Mo.

Fox 4 Kansas City reports that the incredible find at the Overfelt-Johnston house was made after the diseased 100-foot tree was cut down. When splitting the logs, Jeff Eastham, owner of Jeff’s Tree Service, said that the cannonball fell on the ground.

“It’s thrilling,” said Randall Pratt, who owns the Overfelt-Johnston house and is working to restore the property.

Built in 1850, the Overfelt-Johnston house was used as a hospital during the First Battle of Independence in 1862, KMBC reports.

Chains were also found embedded in the tree when Eastham was cutting it down.

Other cannonballs have also been found at the property. Pratt explained that a cannonball that was shot into a window on the second floor of the house is now in the Jackson County Historical Museum.

The 1862 battle resulted in a victory for Confederate forces who surprised Union troops in the city. However, Pratt said that the Union garrison was able to fire off some cannon shots before they were overrun.

“It’s important to find these souvenirs, these novelties from the past, these tragic reminders of what the cost of war and conflict really is,” he told Fox 4.

The Overfelt-Johnston house was placed on the National Register of Historic Places in 1975.

Two Civil War cannonballs were recently discovered on a South Carolina beach in the aftermath of Hurricane Dorian.

Earlier this week, a spokesman for the city of Folly Beach told Fox News that some seashell hunters spotted a suspicious item in the area of the old Coast Guard Base at the east end of the beach. “As per our policy, we notified the Charleston County EOD [Explosive Ordnance Disposal] team who also responded and assisted with notifying the military EOD team,” the spokesman explained, via email.

“It was determined to be a cannonball (one larger 8” shell and one 3” shell),” the spokesman added. “We were advised the military EOD team will handle disposing of the ordnance.”

Aaron Lattin told Fox News that he was one of the people that discovered the cannonballs on the beach.

Other Civil War cannonballs have been found in the area. LiveScience reports that a pile of 16 corroded ordnances was uncovered as a result of Hurricane Matthew in 2016.

Civil War sites and artifacts from the era regularly offer fresh glimpses into the bloody conflict. A Civil War-era gravestone linked to the infamous Quantrill’s Raid, for example, was recently discovered in a Kansas forest.

Earlier this year, archaeologists in Delaware located the gravestone of a Civil War soldier that may provide a vital clue in uncovering a long-lost African-American cemetery.

The site is known to the local community as containing the remains of African-Americans who lived in the area, officials say.

Other Civil War finds have also been made in recent years. Last year, for example, the remains of two Civil War soldiers were discovered in a surgeon’s burial pit at Manassas National Battlefield Park in Virginia. Also in 2018, a vacationer on a North Carolina beach captured drone footage of Civil War-era shipwreck.

In 2017, forensic linguists said they had likely unraveled the mystery surrounding a famous Civil War-era letter, long believed to have been written by President Abraham Lincoln.