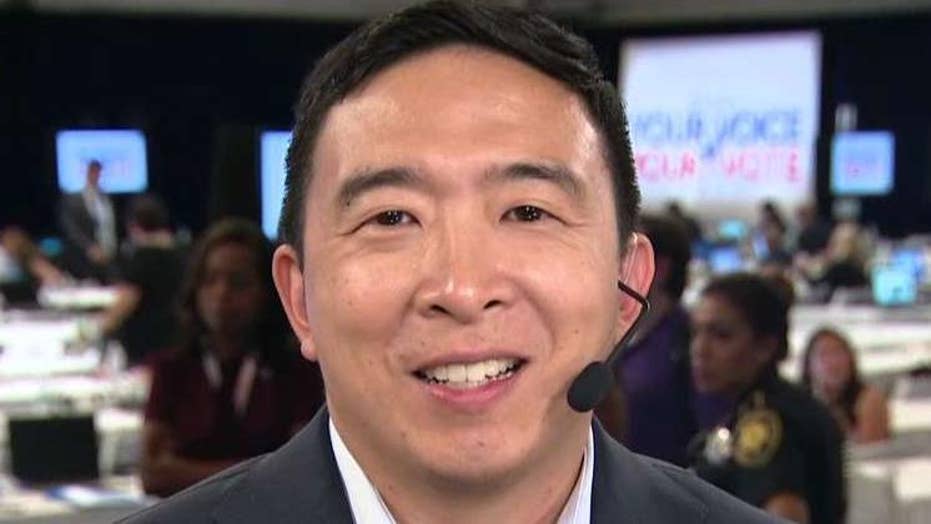 Democratic presidential candidate Andrew Yang said Friday during a campaign event that if the nation’s economy stumbles in the coming months, “it would likely be good for my campaign.”

But the onetime White House long shot who’s soared in recent months clarified minutes later, in an interview with Fox News, that “I would never wish for the economy to have a downturn because I know that lives get disrupted and in some cases even lost when there’s an economic downturn.”

The tech entrepreneur has become a serious contender for the Democratic nomination thanks to the popularity of his so-called "Freedom Dividend." That’s Yang’s universal basic income proposal to give each adult American $1,000 a month to ease the economic pain stemming from lost jobs due to automation and artificial intelligence. He says he’ll pay for the program by implementing a national value-added tax.

Speaking Friday morning at a local chamber of commerce event in New Hampshire, the state that holds the first presidential primary, Yang was asked by an audience member how a potential economic crisis or recession would impact his presidential campaign.

Yang answered: “I think that if we do have a downturn over this next period, it would likely be good for my campaign because I’m so focused on this set of issues, and I think it would actually increase the appeal and appetite for some of the measures I'm describing."

But a few minutes later the candidate told Fox News and the New Hampshire-based Seacoast Media Group that he’s not rooting for the economy to go south.

“When I was asked a question how would it affect my campaign, I think most people would agree that if there is a downturn, the party in power or in office generally has a harder time getting reelected. But I would never wish for that,” he said.

President Trump in recent months has repeatedly dismissed fears of an impending recession, and he and some other Republicans have accused Democrats and the mainstream media of rooting for an economic downturn.

Democratic presidential candidates have mostly avoided any appearance of cheering for a recession, which of course could harm the finances of the very voters they’re courting.

The candidate highlighted that “when I’m president, we’ll look around and say let’s actually strengthen our communities and our common folks directly and that’s going to be a way for us to get through whatever economic tensions are coming our way.”