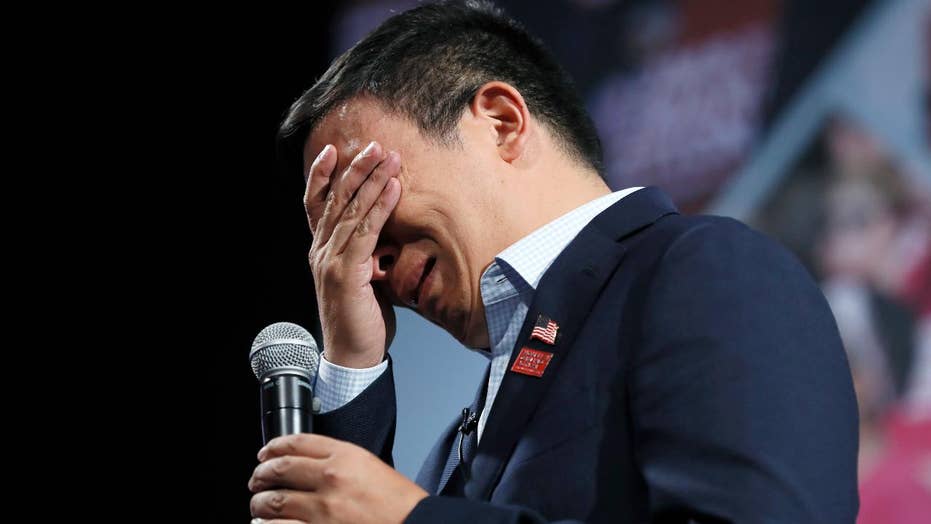 Democratic presidential candidate Andrew Yang shed tears at an Iowa town hall about gun safety, when a mother recalled how her 2-year-old daughter was fatally shot by a stray bullet while the girl's twin brother watched.

The woman referred to statistics of unintentional shootings by children and asked how Yang would address the problem if elected president. Before answering, Yang asked if he could give the woman a hug, then appeared to fight back tears when he returned to the stage.

NEWLY EMBOLDENED, ANDREW YANG TAKES JABS AT SOME OF HIS 2020 DEMOCRATIC RIVALS

“I have a 6- and 3-year-old boy, and I was imagining,” Yang began before choking up. “I was imagining it was one of them that got shot and other saw it,” he continued. “I’m so sorry.”

Yang quickly collected himself and suggested a method of reducing the number of such tragic accidents.

“One of the things we can if we can convince Americans that personalized guns are a good idea, then again if the child gets ahold of the gun then they can’t do anything with it. Then it just becomes a very heavy, expensive prop.”

Yang’s campaign did not immediately respond to questions for details as to how the upgrades would work, but their website notes that they could work through existing gun buyback programs to let people trade non-personalized guns for personalized ones that only the owner would be able to fire. Alternatively, Yang suggests giving tax credits to cover the full cost of upgrading a gun with personalization.