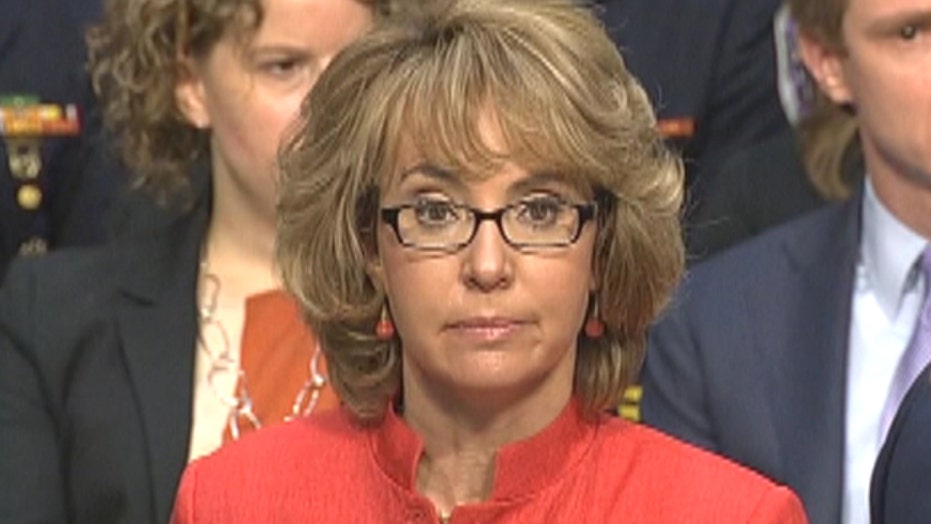 Gabby Giffords speaks at gun hearing: 'We must do something'

Influential figures on both sides of the gun control debate tangled Wednesday over the effectiveness of background checks, with the husband of wounded former Rep. Gabrielle Giffords urging an overhaul and a top National Rifle Association official saying "homicidal maniacs" will skirt the system no matter what.

NRA Executive Vice President Wayne LaPierre was the final witness to testify before the Senate Judiciary Committee as the panel begins to consider new legislation. He argued that more security and more enforcement, but not new laws, is the answer to gun violence.

He specifically knocked down a call by President Obama and others for "universal" background checks, particularly at gun shows.

But Giffords' husband Mark Kelly argued that improving the background check system should be a priority. He said holes in the law "make a mockery" of the system -- echoing Obama's recent proposal, he called for submitting private sales to background checks as well. He further argued that stronger background checks could have prevented the mass shooting in January 2011 where his wife was shot in the head.

LaPierre later got into an argument over the issue with Sen. Dick Durbin, D-Ill., after LaPierre argued that more background checks would merely subject "law-abiding people" to more taxes and fees and hassle without going after "bad guys."

"Mr. LaPierre that's the point," Durbin said. "The criminals won't get to purchase the guns because there'll be a background check. We'll stop them from the original purchase -- you missed that point completely. I think it's basic."

Raising his voice, LaPierre said: "Senator, I think you missed the point!" Chairman Patrick Leahy, D-Vt., then banged the gavel and called for order.

The disagreement was one of several sticking points as the Senate Judiciary Committee held the first gun control hearing since Obama released a comprehensive gun control plan earlier this month.

He continued: "Proposing more gun control laws, while failing to enforce the thousands we already have -- it's not a serious solution for reducing crime."

The panel was stacked with high-profile witnesses on both sides of the debate. Giffords, who was shot while meeting with constituents outside an Arizona supermarket in January 2011, made a surprise appearance at the start of the hearing Wednesday morning to urge Congress to act.

"We must do something," Giffords said, speaking slowly but clearly. "It will be hard, but the time is now. ... You must act."

Giffords urged lawmakers to "be bold, be courageous." She later met with President Obama at the White House.

"Violence is a big problem. Too many children are dying," the former congresswoman said. Six people were killed, and 12 were wounded, in the Arizona attack. The fatal shooting at an elementary school in Newtown, Conn., last month brought the issue of gun control back to the fore of the congressional agenda.

Kelly, speaking after his wife, called for a "careful and civil conversation" about limitations on firearms. He noted that he and Giffords own guns, but are "anti-gun violence."

He said a "matrix" of failures contributes to the country's gun violence problem, including mental illness and poverty, but also gun laws. He said the complexity is "not an excuse for inaction." Kelly said weapons designed to inflict maximum damage have turned corners of America "into places of carnage and gross human loss."

Kelly briefly described how the 2011 shooting affected his family, leaving his wife partially blind and struggling to walk. Kelly and Giffords have formed a political action committee called Americans for Responsible Solutions to back lawmakers who support tighter gun restrictions and counter the influence of the NRA.

LaPierre, though, argued that prosecution for federal weapons violations in 2011 was essentially down 35 percent, compared to previous administrations, which he says means violent felons, gang members and the mentally ill who possess firearms are not being prosecuted.

The hearing, titled "What Should America Do about Gun Violence," takes place roughly seven weeks after a lone gunman with psychological problems used an assault weapon to kill 20 first-graders and six adults inside a Connecticut elementary school, prompting renewed calls for more gun control.

The NRA, with 4.5 million active members, remains the most powerful gun-rights advocacy group in the country.

Obama is calling for a renewed ban on semi-automatic weapons and high-capacity magazines, along with more extensive background checks.

LaPierre said the group is willing to work with Congress and the president in curbing gun violence, but "law-abiding gun owners will not accept blame for the acts of violent or deranged criminals. Nor do we believe the government should dictate what we can lawfully own and use to protect our families."

The California Democrat on Tuesday said she will hold her own hearing on gun control because she was unhappy that three of the five witnesses testifying Wednesday are "skewed against us."  Feinstein is a member of the Judiciary Committee.

Despite the momentum gun control advocates have gained since the massacre in Newtown, Conn, it will be difficult for them to prevail in Congress this year because of the popularity of guns in many states -- including several represented by Democratic senators -- and the formidable muscle of the NRA on Capitol Hill, lawmakers and others say.

Among other obstacles, the Republican-run House has shown little immediate interest in making dramatic changes in the laws.

At the Senate hearing, Leahy, D-Vt., said lawmakers were not trying to take away Americans' guns.

But he voiced skepticism about a renewed ban on assault weapons and high-capacity magazines. "Those can be circumvented by carrying multiple guns," Grassley said.