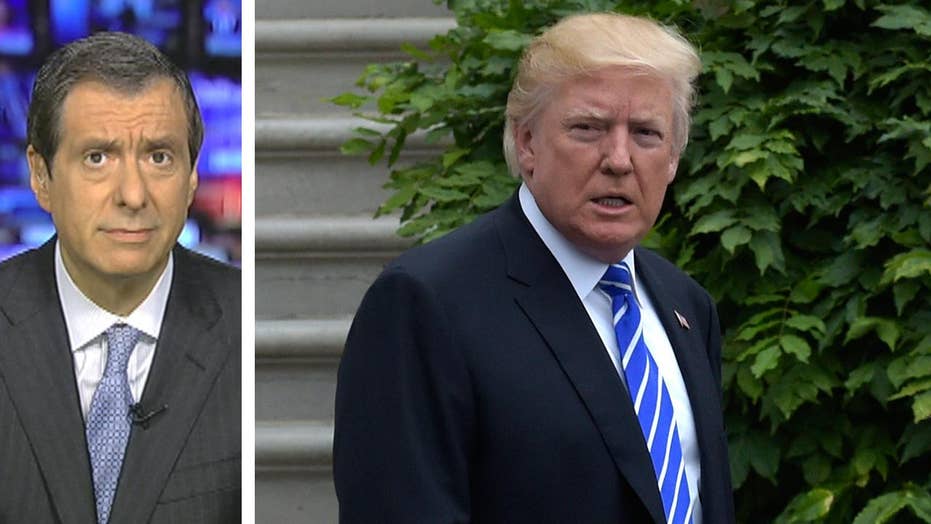 Kurtz: Life beyond the media bubble

If you live inside the Beltway hothouse, you’re practically fainting from all the Trump taunts against the media, from the CNN faux-wrestling video to the cosmetic slap at Mika Brzezinski.

But out in the rural heartland, it’s a different story.

That viewpoint snuck onto the New York Times op-ed page courtesy of Robert Leonard, an Iowa radio news director who talks to plenty of Trump supporters in his part of the state.

And guess what? They don’t much care about wrestling videos and insulting cable news hosts. They think the president is doing just fine, that the media are out to get him, and that most of what obsesses the press is just noise.

He writes: “What I do hear from my conservative friends — most still ardent Trump supporters — is a collective yawn at the Washington maelstrom. Few care about his tweets — even about Mika Brzezinski and Joe Scarborough and the CNN body slam. The whacking of James Comey? About time. President Obama’s appointee anyway. Mr. Trump’s asking if Mr. Comey could drop the Michael Flynn investigation? It was a simple question, not obstruction of justice. The Comey testimony? Vindication for Mr. Trump! Mr. Comey is a leaker, he lied under oath, and he’s going down. He’ll be lucky if he doesn’t serve prison time.”

And then Leonard gets at an underlying reality that many media folks miss:

That doesn’t make them right, but it’s a point of view that isn’t terribly popular in New York and Washington, and which must be reckoned with. The president’s attacks on media figures, even if sometimes tasteless, are seen by some people as slamming a group of elitists that doesn’t respect them. (In a Politico poll, 52 percent said Trump’s Mika tweets made them view him less favorably, and 17 percent said more favorably.)

But Leonard then takes a detour. Having noted that in his area Fox News is on in most restaurants and bars, he apparently doesn’t watch much of it. He says he thinks it’s unfair. And he writes “only that network has the power to convince conservatives” that it’s in their best interest “to dump Mr. Trump.”

First, Leonard vastly overestimates the power of any news outlet against the presidential megaphone. Barack Obama complained about Fox all the time, but that never stopped him from being elected and reelected.

Second, the news director seems to think that Fox operates under daily marching orders. There are certainly voices at this network sympathetic to Trump, from Sean Hannity to “Fox & Friends.” But the straight news broadcasts are a different story. And some of Fox’s most prominent conservative commentators—Charles Krauthammer, Steve Hayes, Karl Rove, Rich Lowry, Jonah Goldberg—opposed him during the campaign and remain largely critical.

Having demonstrated a deft feel for why Trump is largely immune to the media onslaught, Leonard resorts to wish fulfillment in imagining a scenario to drive the president from office.