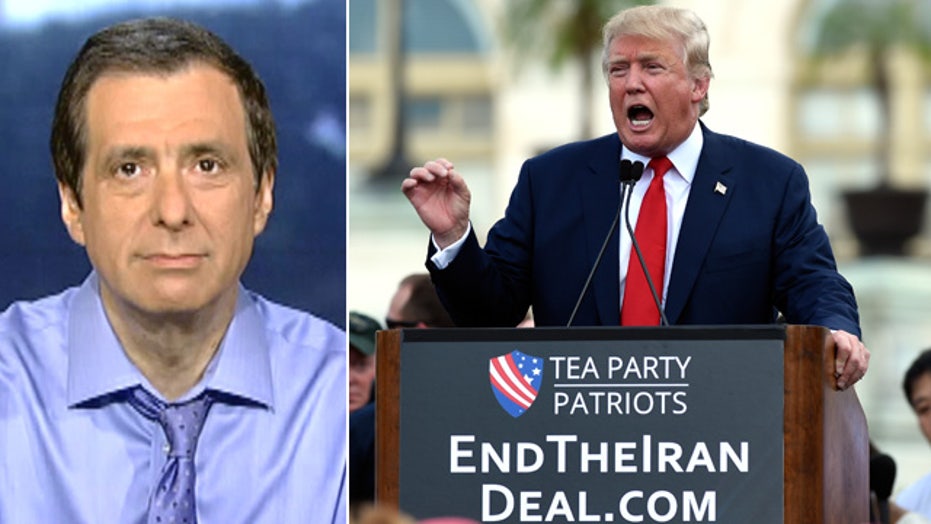 Under a sweltering sun outside the West Front of the Capitol, Donald Trump took the lectern and denounced the Iran nuclear deal.

But for once, he was not the star. And that’s significant.

There were perhaps a couple of thousand people gathered on the grassy grounds, waving signs such as “Obama: Enemy of Israel. Enemy of U.S.”

And that’s significant, too.

In agreeing to appear at yesterday's Washington rally, Trump found himself sandwiched between Ted Cruz and radio host Mark Levin.

He only spoke for five minutes.

Trump was, in other words, acting like a politician. And we are starting to see much more of that.

I do not say that as any kind of criticism. In fact, it was probably inevitable.

The front-runner for the Republican presidential nomination is by definition a politician, as Trump has grudgingly conceded.

With the White House having lined up 41 Democratic senators to back the Iran deal, the political battle is essentially over. So Trump came to practice the politics of symbolism.

In his brief speech, Trump declared that the Obama administration’s deal was “incompetently negotiated.” He complained that the president refers to the Ayatollah Khamenei as “supreme leader.” He said America will get “nothing” from the agreement, that “we are led by very, very stupid people…We can’t beat ISIS? Give me a break.”

What he did not say, unlike Cruz and many other Republicans, is that he would tear up the deal on the day he takes office. You can’t do that with even a bad contract, says Trump. He would just achieve a better result by being far tougher on the Iranians.

Trump hugged Cruz at the rally and met with Sen. Jeff Sessions, who stood by him at that rally in Alabama. Just like a political guy.

If you’ve watched him carefully over the last couple of weeks, The Donald has toned it down. He hasn’t lost his fire, but he is being more restrained. He still calls Jeb “low energy,” but he isn’t handing out the insults every few minutes.

He is, in short, maturing as a candidate.

(One prominent exception: A new Rolling Stone story saying Trump said this in a reporter's presence on an airplane when Carly Fiorina's face came on the screen:

"Look at that face! Would anyone vote for that? Can you imagine that, the face of our next president," . . . "I mean, she's a woman, and I'm not s'posed ta say bad things, but really, folks, come on. Are we serious?")

On O’Reilly the other night, Trump said the U.S. had to take in some Syrian refugees “on a humanitarian basis.” He was asked about Kim Davis, the Kentucky county clerk who went to jail rather than issue same-sex marriage licenses. It was “too bad” she was jailed, Trump said, but “we are a country of laws.” No bomb-throwing.

But just when Trump might be in danger of sounding like an ordinary pol, he made an audacious demand of CNN. After helping Fox draw 24 million viewers for its debate, Trump wrote CNN President Jeff Zucker about the network boosting its ad rates for next week’s debate, from $5,000 per 30-second spot to as much as $200,000. “While I refuse to brag…this tremendous increase in viewer interest and advertising is due 100% to ‘Donald J. Trump.’”

While he refuses to brag.

Therefore, he wrote, CNN should give up its millions of dollars in profits and donate them to veterans’ charities on a list to be supplied by Trump.

Was that a threat? Fox’s Griff Jenkins grabbed Trump at the Capitol rally, asking whether he might boycott the debate if Zucker refuses to comply. Trump said he had yet to make that determination.

I mean, who does that? This is the dictionary definition of chutzpah.

In one fell swoop, he seizes the spotlight, ingratiates himself with vets and puts CNN at risk of looking greedy as the debate approaches.