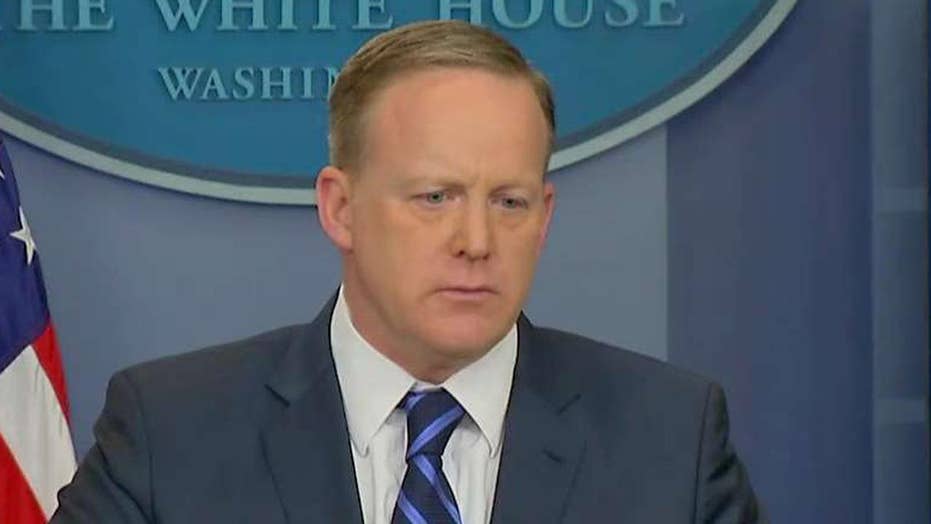 President Trump has not spoken to his FBI director about his claims that former President Barack Obama tapped his phones last year, according to White House Press Secretary Sean Spicer – who put the onus on Congress to investigate the widely disputed allegations.

Spicer, appearing for his first on-camera briefing since Trump's explosive allegations over the weekend, was peppered with questions Tuesday about what proof, if any, the president had.

Spicer said no evidence supporting the wiretapping claim had been shared with him and that the issue was above his paygrade. He added that Trump’s tweets should be taken “at face value” and pushed back on reports the White House was attempting to walk back the claims.

One official apparently claiming to have insight, however, is FBI Director James Comey. Fox News confirmed that senior FBI leaders including the director contend there is no evidence to support Trump's claims, and have asked the Justice Department to publicly refute them.

Yet asked at Tuesday's briefing if Trump has spoken to Comey, Spicer said: "The president has not."

Spicer reasoned that if the White House were to get involved in investigating the claims the president made on Twitter, the media would in turn attack the White House for getting involved, “so it’s a no-win situation.”

The White House now wants Congress to probe the allegations, while defending Trump for making them.

Republican lawmakers have said their probes into Russian interference in last year’s campaign will be wide-ranging. House Intelligence Committee Chairman Devin Nunes, R-Calif., at a press conference Tuesday, seemed to downplay Trump’s tweets – while announcing his committee would hold its first public hearing March 20 on the broader issue.

On Monday, White House Counselor Kellyanne Conway told “Fox & Friends” she could not “reveal” when the president first heard of possible wiretapping in Trump Tower.

“He’s the president of the United States,” she said. “He has information and intelligence that the rest of us do not.”

In a flurry of tweets Saturday morning, Trump said he had “just found out” about being wiretapped and pointed the finger at Obama. Trump called his predecessor a “bad (or sick) guy” and likened the situation to “Nixon/Watergate” and “McCarthyism.”

Trump may have been referring to a recently published Breitbart article that addressed claims from a Mark Levin radio segment about alleged efforts by the Obama administration to undermine the Trump campaign. The timeline was drawn from a range of other news reports and sources, including The New York Times, The Washington Post and The Guardian.

Comey served as FBI director under Obama, and has continued in that role under Trump.

But Spicer stood firm Tuesday, saying the president would not withdraw his tweets before the issue is adjudicated and has no regrets about making the claims.

“There is clearly a role that Congress can play in their oversight,” Spicer said.

He added, “It’s not a question of proving [the claims]. It’s that they have the resources and the clearances and the staff … to fully and clearly investigate this.”

When asked by a reporter about his personal feelings on the issue, he declined to elaborate.

“I get that that’s a cute question to ask,” Spicer said. “My job is to represent the president."