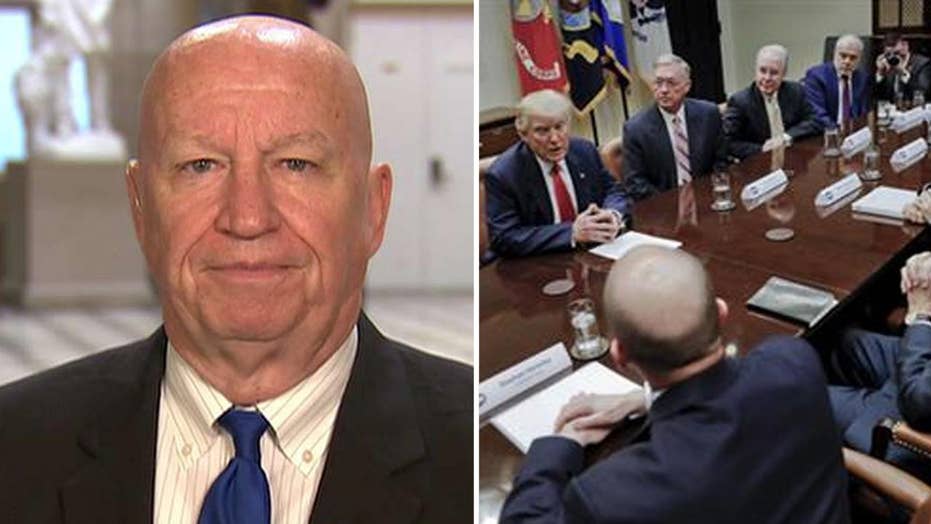 Rep. Chris Collins, R-N.Y., was on fire after House Republicans snatched their health care bill off the floor late last month. Waylaid by the internal collapse, recriminations were under way.

“There’s only one place the finger-pointing should go,” thundered Collins, one of President Trump’s first allies on Capitol Hill. “That’s [toward] the Freedom Caucus.”

The Freedom Caucus is the bloc of conservative House Republicans who many, including President Trump, pilloried for thwarting the health care bill. Collins is a member of the “Tuesday Group,” the amalgam of moderate House Republicans. Many of those members also struggled to get to yes.

So what advice did Collins have if the sides try to jumpstart negotiations?

“Next time one of those calls come in, hang up,” barked Collins. “The Tuesday Group will never meet with the Freedom Caucus. With a capital N-E-V-E-R.”

“I believe health care has moved on and won’t be dealt with again until 2019,” predicted Collins.

On Monday, Collins found himself among a group of moderate Republicans summoned to the White House for a session on trying to salvage the ObamaCare repeal and replace package

So much for soothsaying.

“We are all happy the discussions are open again. I think it was a wake-up calls for some who voted no and went home and they maybe did not get a ticker tape parade,” said Collins.

Rep. Rodney Davis, R-Ill., also backed the package and was among those called to the White House Monday. Still, Davis wondered if the party could seal its own fissures. Davis called out the Freedom Caucus.

“What do they need?” asked Davis.

By nightfall Monday, Vice President Pence journeyed to the Capitol to meet with the Freedom Caucus.

“We continue to work earnestly with Congress for a new future on health care reform,” said Pence Tuesday. “The president and I remain confident we will repeal and replace ObamaCare.”

Pence, Health and Human Services Secretary Tom Price and Budget Director Mick Mulvaney descended on the Capitol around 8:30 p.m. Tuesday for another conclave with key Republicans.

And they talked. For more than two hours. But most lawmakers left the confab uttering bromides.

But while some lawmakers are upbeat, it’s unclear if they’re truly getting anywhere. Sources tell Fox News the consultations may pick up some Republicans but lose others.

House Republicans fear jetting out of Washington for the Easter/Passover break without a new health care bill. Time is short to retrench the bill, walk lawmakers through the legislation and whip it for a vote count.

“I think to suggest that we can’t get it done by the end of the week would be premature,” said Meadows. “There’s concern on my part that if we are making real progress that going home sends a wrong message.”

One source familiar with the talks speculated that there was only a “30 percent” chance the House could act this week even if the sides forged a pact.

“Nothing has happened which would change the votes,” said one senior House leadership aide.

Another senior House Republican source was emphatic that the House wouldn’t remain in session over the weekend and would cut short the recess “only if we have a deal.” Some lawmakers are concerned the sides are exhausting too much effort extricating the health care bill from doom and not focusing on how to avoid a government shutdown at the end of the month.

“This is all about saving face,” said one House Republican source. “The speaker. The president. The committee chairs. The Freedom Caucus.”

When asked whether saving face justified the exercise, the source replied, “Yes. Anything that gets us to yes, at this point.”

Republicans long criticized Democrats for what they perceived were efforts to “muscle through” ObamaCare. Republicans piously touted their own process to advance their own health care measure. Now? Well, it’s messy.

Also, an important operational issue lingers. The health care measure is tucked into what’s called a special “budget reconciliation package,” structured in a way to avoid a Senate filibuster. The House must soon pass a budget for the next spending round. But congressional rules bar the House and Senate from having two “live” budget packages at once. So, the House and Senate could be forced to delay passing a budget for fiscal 2018 if they haven’t disposed of the budget reconciliation vehicle crafted for health care.

Of course, that presumes the House can approve a budget this year. Republicans browbeat Senate Democrats for not adopting budgets. But House Republicans failed to okay a budget last year.

Do lawmakers believe negotiations can lug the legislation across the finish line?

“I don’t know if it’s real or not,” said one senior Republican source of the recent machinations.

“It’s a lot of noise. Busywork,” declared another skeptical Republican.

Some Republicans are leery of the fire drill approach. But they concede, people talking.

“As soon as people quit talking, then you know there is trouble,” said a source familiar with the conversation.