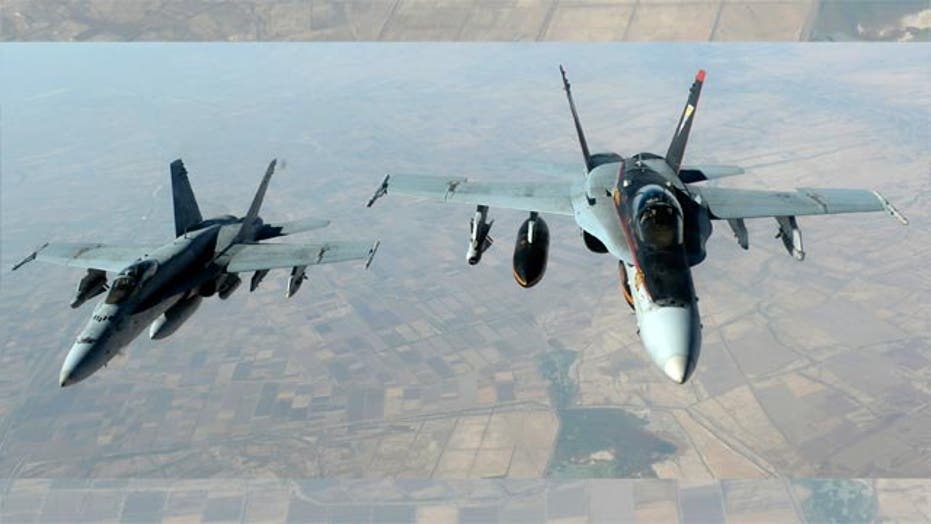 Why coalition against ISIS does not have long-term strategy

U.S.-led airstrikes ramped up in effort to save Kobani

Military and White House officials said Friday that the fierce fighting in the Syrian border town of Kobani has created an opportunity to take out large numbers of Islamic State fighters pouring into the battle.

Though the fighting has raised concerns that the vital town could still fall to the Islamic State, Army Gen. Lloyd Austin, head of U.S. Central Command, claimed Friday that there's an upside for the U.S. and its allies.

"The enemy has made a decision to make Kobani his main effort," Austin said, claiming "manpower" is streaming into the area.

"Now, my goal is to defeat and ultimately destroy ISIL. And if [the enemy] continues to present us with major targets ... then clearly, we'll service those targets, and we've done so very, very effectively here of late," Austin said.

"That has created a rather target-rich environment around Kobani for American and coalition air strikes that when they see clusters of fighters or they see depots of material or supplies that are critical to the success of those fighters, it's easier to take them out," Earnest said.

While touting the opportunity to take out a large number of targets in Kobani, military officials nevertheless cautioned against expecting quick progress in the overall campaign against ISIS, or ISIL.

"The campaign to destroy ISIL will take time, and there will be occasional setbacks along the way," Austin told a Pentagon news conference, "particularly in these early stages of the campaign as we coach and mentor a force [in Iraq] that is actively working to regenerate capability after years of neglect and poor leadership."

And he acknowledged "it's highly possible that Kobani may fall."

While hammering the jihadists daily from the air, the U.S. military is talking of a years-long effort -- one that will require more than aerial bombardment, will show results only gradually and may eventually call for a more aggressive use of U.S. military advisers in Iraq.

Austin said he believes the Iraqi government will successfully enlist the support of Sunni tribal leaders in Anbar province to turn the tide in that important region, where the militants have made recent gains.

And he said he sees no imminent threat to the international airport west of Baghdad, where U.S. Apache helicopters are monitoring Islamic State efforts to make inroads on the capital.

Yet the militants are making gains in some parts, like the Sunni-dominated Anbar province, even as they stall or retrench in other areas. Baghdad is not believed to be in imminent danger of falling but it is "certainly in their sights," Pentagon spokesman Rear Adm. John Kirby said.

The Pentagon is preparing to set up a more formally organized command structure, known in military parlance as a joint task force, to lead and coordinate the campaign from a forward headquarters, perhaps in Kuwait. On Wednesday it formally named the campaign "Operation Inherent Resolve."

As of Thursday the U.S. had launched nearly 300 airstrikes in Iraq and nearly 200 in Syria, and allies had tallied fewer than 100, according to Central Command. Those figures don't capture the full scope of the effort because many airstrikes launch multiple bombs on multiple targets. Central Command said that as of Wednesday, U.S. and partner-nation air forces had dropped nearly 1,400 munitions.