The White House on Monday condemned a fake video reportedly played during a recent event at a Miami resort owned by President Trump showing the president going on a shooting rampage against journalists.

Stephanie Grisham, the White House press secretary, tweeted Monday morning that the president “has not yet seen the video, he will see it shortly, but based upon everything he has heard, he strongly condemns this video.”

The New York Times reported that the video was played during a conference held by American Priority, a pro-Trump group, at Trump National Doral Miami. The event was not hosted by the president or his reelection campaign. A Trump campaign spokesman, Tim Murtaugh, told the paper: “That video was not produced by the campaign, and we do not condone violence.”

The White House Correspondents Association said in a statement it was “horrified” by the video.

“The WHCA is horrified by a video reportedly shown over the weekend at a political conference organized by the president’s supporters at the Trump National Doral in Miami,” said Jonathan Karl, the president of the White House Correspondents’ Association and a journalist at ABC News. “All Americans should condemn this depiction of violence directed toward journalists and the president’s political opponents.” 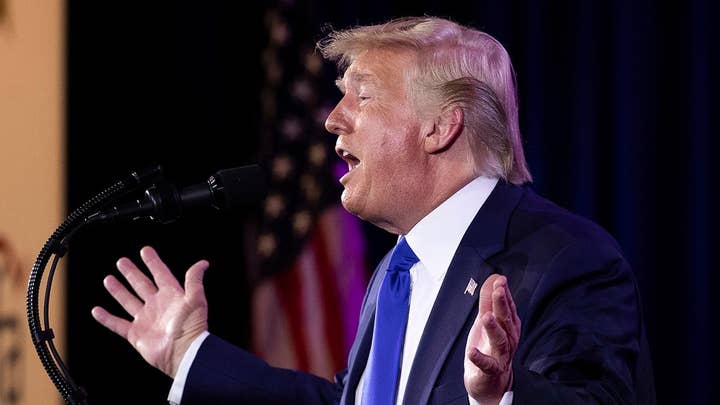 The White House Correspondents Association called on Trump himself to denounce the video.

“We have previously told the president his rhetoric could incite violence,” Karl said. “Now we call on him and everybody associated with this conference to denounce this video and affirm that violence has no place in our society.”

According to the newspaper, the video seems to be an edited scene from a movie called the “Kingsman: The Secret Service.” The edited video shows the president’s head superimposed on a man opening fire inside a church — described in the video as the “Church of Fake News.” Those being shot in the pews have logos of media organizations on them.

The New York Times said a number of the president’s top allies were scheduled to appear at the conference, including his son Donald Trump Jr., former White House spokeswoman Sarah Huckabee Sanders and Florida Gov. Ron DeSantis. The paper said Sanders and Trump Jr. both said they did not see the video.