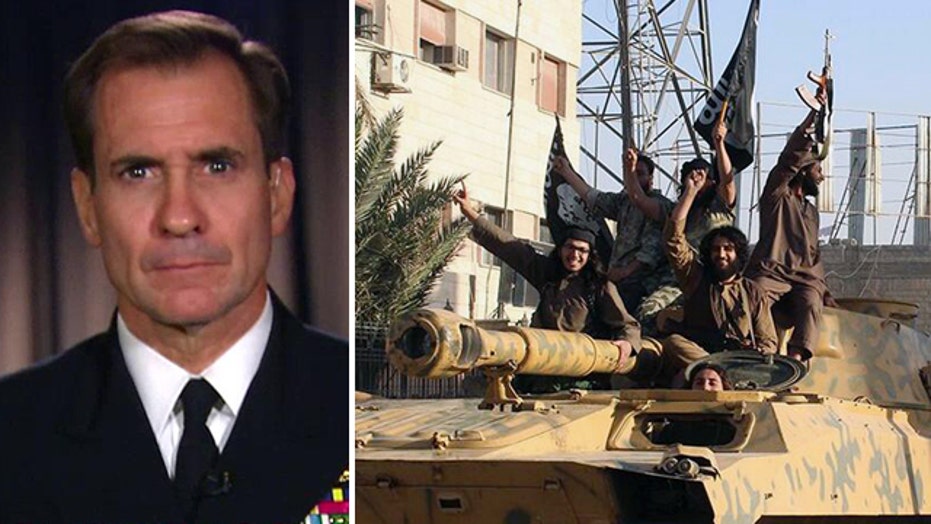 U.S. military officials gave varying – and at times confusing -- explanations Monday for what, if anything, would trigger U.S. airstrikes against Islamic State targets in Syria, after the Joint Chiefs chairman dialed back earlier comments that suggested support for such a strike.

On Sunday, Joint Chiefs Chairman Gen. Martin Dempsey appeared to tone down remarks he made last week about the growing terror network that’s taken root in Iraq and Syria.

Dempsey, speaking to reporters on board a military plane traveling to Afghanistan, said he believes the Sunni insurgent group formerly known as ISIS is a regional threat, and he would not recommend airstrikes in Syria until they have become a direct threat to the U.S. He said the group is not currently plotting or planning attacks against the U.S. or Europe.

But Dempsey spokesman Col. Ed Thomas clarified to Fox News on Monday that Dempsey “believes that ISIS is a regional threat that will soon become a threat to the United States and Europe.”

Thomas said Dempsey is preparing options to “address” ISIS in both Iraq and Syria “with a variety of military tools including airstrikes,” and believes a coalition of partners is necessary to confront the threat.

But as for what could prompt U.S. airstrikes in Syria, a senior U.S. Defense spokesman told Fox News that the judgment on whether the Islamic State is a threat against the homeland is just one trigger.

"Any threats against U.S. personnel and interests could drive action against ISIL in Syria," the official said.

The overall message appeared to be that the terror group could soon pose such a threat, and the military is preparing its options. Last week, though, Dempsey and Defense Secretary Chuck Hagel spoke in dire terms about the threat posed by the Islamic State, with Dempsey saying the organization could not be defeated without some action in Syria.

The senior U.S. Defense spokesman said Monday that the message was the U.S. and its allies need a "long-term strategy" to separate ISIS from the population. "In the meantime, if we see a plot against the homeland, of course we'll attack it," the official said. (White House Press Secretary Josh Earnest reiterated Monday afternoon that there is not an active plot right now by Islamic State militants in Syria to attack the U.S.)

“There has been no direction from the White House or anybody else to tone down the way we're speaking about ISIL, and I think we've all been very consistently talking about real and growing threat that ISIL poses,” Kirby said.

ISIS has repeatedly made threats to attack the U.S. through social and conventional media. Earlier this month, in a Vice News documentary, a spokesman for the group vowed to "raise the flag of Allah in the White House." The group took over Iraq's second largest city, Mosul, in June, and has since declared an Islamic state, or caliphate, in a swath of territory covering northeastern Syria and northern and western Iraq. U.S. airstrikes and a new policy of direct military aid to Kurdish Peshmerga fighters have served as a check on a threatened ISIS advance toward Kurdish territory in northern Iraq.

On Sunday, though, Dempsey contrasted ISIS with the Yemen-based Al Qaeda in the Arabian Peninsula, which has plotted and attempted attacks against the U.S. and Europe. As a result, the U.S. has conducted counterterrorism strikes against the group within Yemen.

Dempsey said that so far, there is no sign that the Islamic State militants are engaged in "active plotting against the homeland, so it's different than that which we see in Yemen."

"I can tell you with great clarity and certainty that if that threat existed inside of Syria that it would certainly be my strong recommendation that we would deal with it," said Dempsey. "I have every confidence that the president of the United States would deal with it."

Dempsey also told reporters that he believes that key allies in the region -- including Jordan, Turkey and Saudi Arabia -- will join the U.S. in quashing the Islamic State group.

"I think ISIS has been so brutal, and has wrapped itself in a radical religious legitimacy that clearly threatens everybody I just mentioned, that I think they will be willing partners," said Dempsey, who added that those regional partners could come together and squeeze the Islamic State group "from multiple directions in order to initially disrupt and eventually defeat them. It has to happen with them, much less with us."

Up to now, when asked about airstrikes inside Syria, Dempsey and Hagel have said all options remain on the table. But so far there has been no broader authorization for such operations.

The Obama administration has authorized airstrikes within Iraq to protect U.S. personnel and facilities and to help Iraqi and Kurdish forces assist refugees driven from their homes by the Islamic State. Most of the recent strikes have been around the Mosul Dam, which Islamic militants had taken, but it is now back in the hands of the Iraqi and Kurdish troops.

Senior U.S. leaders, from the White House to the Pentagon, have said the key to success in Iraq is the formation of an inclusive government that will include disenfranchised Sunnis.

Officials have suggested that any additional military assistance from the U.S. to Iraq is contingent on those political and diplomatic steps by the government.

One possibility, said Dempsey, would be to have U.S. forces provide more expanded advice and assistance to the Iraqi force. He said military assessment teams looked at about 50 Iraqi brigades and a number of the Kurdish units and have a good idea which ones have appropriate training and equipment and have not been infiltrated by militia.

So far, Dempsey said the U.S. has not sought or received permission to put advisers into Iraqi brigades or headquarters units and accompany them into combat.

To date, U.S. forces have conducted a total of 96 airstrikes across Iraq. Of those, 62 have been around the Mosul Dam.