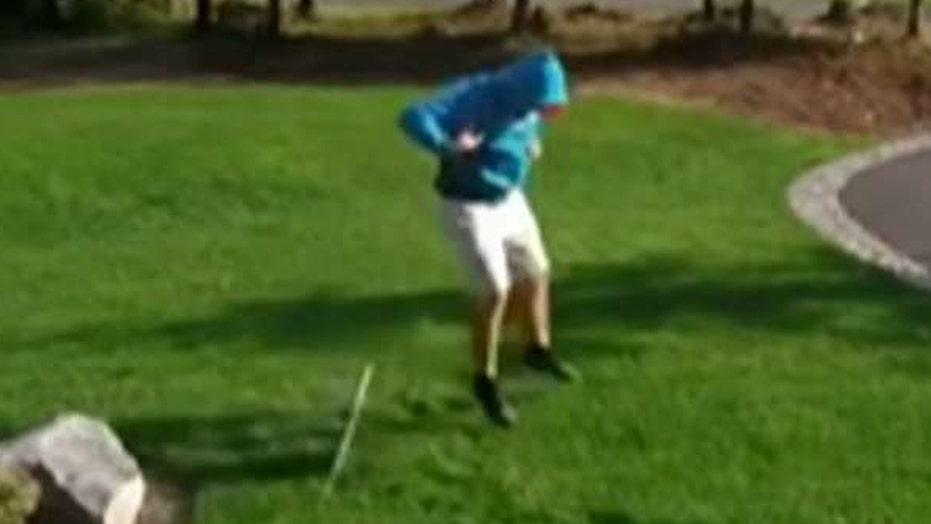 A video showing a hooded thief trying to steal a Donald Trump yard sign and getting a shocking surprise has gone viral.

The video has been viewed more than 870,000 times since it was posted on YouTube Wednesday by a Trump supporter who apparently rigged the sign with electricity. In the brief video the person behind the video claims to have acted after losing other Trump signs to theft and vandalism.

The video captures a man in a blue hooded sweatshirt trying to take the sign and getting shocked with a small jolt of electricity, WDBO-FM in Orlando reports.

In the video the man runs shaking his hand after he appears to have gotten zapped.

According to the person who posted the video the would-be sign stealer was a neighbor who was arrested for trespassing, though there’s no independent verification and the video doesn't say where it was shot or when.

Earlier this month another Trump supporter in Washington state told a radio station he hooked up a 1.5-joule electric fence to protect his Trump yard signs from thieves.

“It’ll light you up a bit, especially if you’re standing in wet grass,” Gilbride told KIRO Radio, according to Mynorthwest.com.

Gilbride told the station a surveillance camera in front of his Bellingham home caught a woman stealing the sign. She got a jolted but succeeded in taking the sign anyway.

“This young lady came running through and she grabs the signs, pulls them out and that’s where you can see plain as day, the jolt hit her a little bit,” he said. “She just stopped, just a dead stop, and soon as the pulsing was done, she kinda got her senses and ripped them out and took off running down the street. But it was a pretty funny video.”