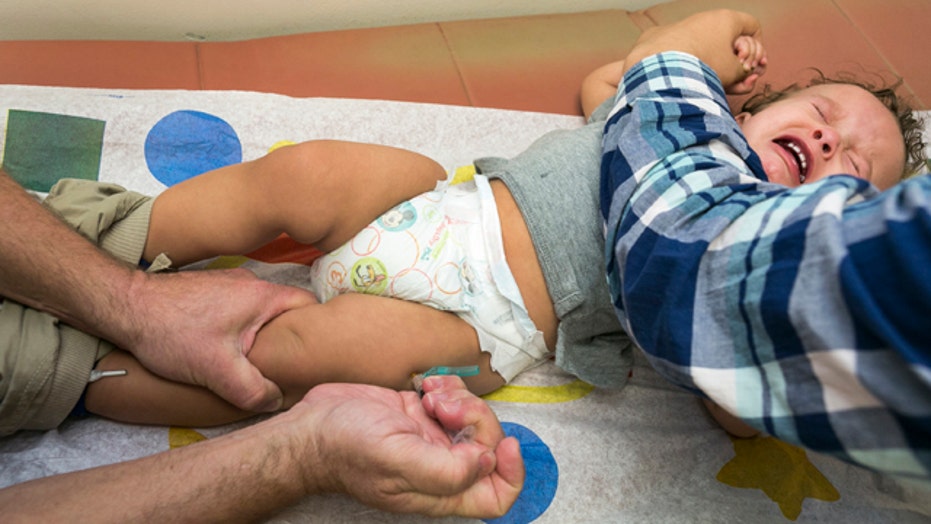 The roiling national debate over vaccinations has spilled over into the 2016 presidential race, as potential candidates clash over whether a measles outbreak underscores the need for strict vaccination policies.

New Jersey Gov. Chris Christie and Kentucky Sen. Rand Paul, both potential Republican candidates, waded into the debate on Monday, saying parents should have a say in whether to vaccinate their kids. The remarks were not a departure from previously stated positions, but in light of the current measles outbreak, they drew widespread attention -- and criticism.

The Centers for Disease Control and Prevention is reporting 102 confirmed measles cases spread across 14 states, which follows last year's record outbreak in which 644 cases were diagnosed across 27 states -- the largest outbreak since the virus was declared eliminated in 2000.

On Tuesday, Ben Carson, a neurosurgeon and conservative advocate who is considering a White House run, weighed in on the other side. While saying there are "exceptional situations" that should be heard and he strongly believes in individual rights, Carson said, "I also recognize that public health and public safety are extremely important in our society."

He said in a statement: "Certain communicable diseases have been largely eradicated by immunization policies in this country and we should not allow those diseases to return by foregoing safe immunization programs, for philosophical, religious or other reasons when we have the means to eradicate them."

The statement puts some distance between Carson, and Christie and Paul.

Christie, who spoke Monday after making a tour of a biomedical research lab in Cambridge, England, said that he and his wife had vaccinated their children. However, the governor added, "I also understand that parents need to have some measure of choice in things as well. So that's the balance that the government has to decide."

Later Monday, Paul said in a radio interview that he believed most vaccines should be voluntary.

"I have heard of many tragic cases of walking, talking, normal children who wound up with profound mental disorders after vaccines," Paul, an eye doctor, said in a subsequent interview while suggesting vaccines were "a good thing." ''But I think the parents should have some input. The state doesn't own your children."

Both men's staffs later sent out statements clarifying their remarks. Christie's spokesman said the governor believed that "with a disease like measles there is no question kids should be vaccinated." The statement from Paul's office pointed out that the senator's children have all been vaccinated and added that Paul "believes that vaccines have saved lives, and should be administered to children.

Hillary Clinton, the leading likely Democratic contender for the party nomination in 2016, couldn't resist taking a dig at the GOP hopefuls on Twitter.

"The science is clear: The earth is round, the sky is blue, and #vaccineswork. Let's protect all our kids. #GrandmothersKnowBest."

On Tuesday, even House Speaker John Boehner weighed in. Asked about the dispute, he said, "I don't know that we need another law, but I do believe that all children ought to be vaccinated."

Medical experts and political consultants from both sides joined in the debate, following Christie's and Paul's comments.

"When you see educated people or elected officials giving credence to things that have been completely debunked, an idea that’s been shown to be responsible for multiple measles and pertussis outbreaks in recent years, it’s very concerning," Amesh Adalja, an an infectious-disease physician at the Center for Health Security at the University of Pittsburgh, told The Washington Post.

GOP operative Rick Wilson told the paper that he thought Christie's remarks could have been a clumsy play to win over conservative voters suspicious of government mandates.

"There’s only one of two options," Wilson said of Christie. "Either he’s so tone-deaf that he doesn’t understand why saying this is bad for him, or this is a considered political strategy. And that would be even more troubling."

In fact, Christie pledged to fight for greater parental involvement in vaccination decisions during his first campaign for New Jersey governor in 2009.

All states now require children to get certain vaccinations to enroll in school, although California and New Jersey are among 20 states that let parents opt out by obtaining a waiver. Parents in New Jersey seeking such a waiver for medical reasons must submit a written statement from their doctor or registered nurse.

The American Academy of Pediatrics strongly urges parents to get their children vaccinated against measles and other childhood diseases. The New Jersey health department's guidelines on vaccines say that objections "based on grounds which are not medical or religious in nature and which are of a philosophical, moral, secular, or more general nature continue to be unacceptable."

Concerns about autism and vaccinations are often traced to a 1998 study in the British journal Lancet. While the research was later discredited and retracted by the journal, legions of parents abandoned the vaccine, leading to a resurgence of measles in Western countries where it had been mostly stamped out. Last year, there were more than 4,100 cases in Europe, according to the European Centre for Disease Prevention and Control.

Measles is a highly contagious disease that spreads through the air, with symptoms that include fever, runny nose and a blotchy rash. The measles-mumps-rubella vaccine is 97 percent effective at preventing measles, according to the Centers for Disease Control and Prevention.

"Choosing not to vaccinate your child could also endanger the health of other children in your community," CDC director Tom Frieden said Monday.

New Jersey requires the vaccine for children between 12 months and 15 months old, and then a second dose between ages 4 and 6. Such mandated vaccinations are a point of irritation among some conservatives, notable in the early voting state of Iowa, where Christian home-school advocates constitute an influential bloc of voters who take part in the Republican presidential caucuses.

Barb Heki, a leader in Iowa's home-school advocacy network, said such parents "adhere to the idea that it's the parents' right to make the decision on vaccinations.

"More important than a candidate's stance on vaccinations, I'm more concerned for parents' rights to make decisions about their own children, period," she said. "That's paramount."

Louise Kuo Habakus, a radio host who runs a nonprofit group opposed to state-required vaccinations, said she helped arrange a meeting between parents and Christie on the issue in 2009 and saluted him for standing up for the "rights of parents to direct the health, welfare and upbringing of their children."

"He's been absolutely constant and I believe courageous and principled on this issue," she said.