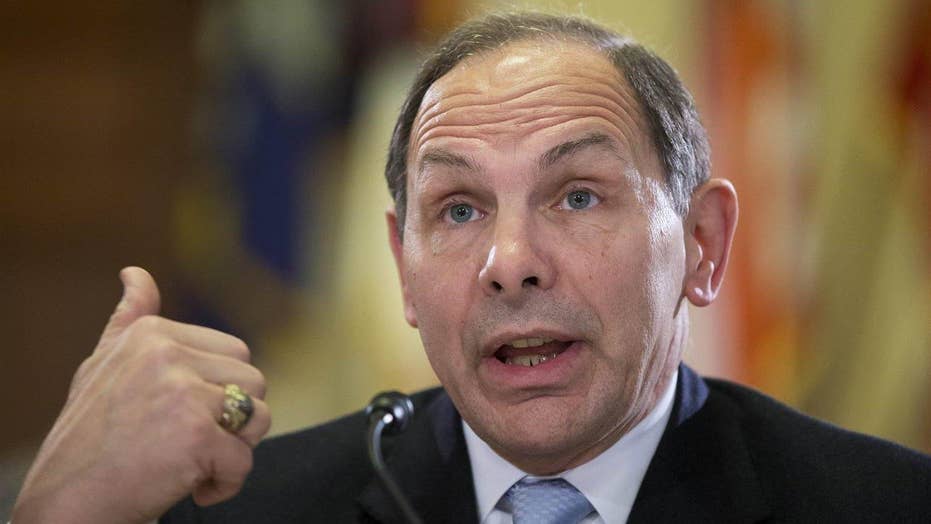 Time for 'out of touch' VA secretary to resign?

Veterans Affairs Secretary Robert McDonald is scrambling to calm a growing bipartisan firestorm after downplaying veteran wait times at VA hospitals by comparing them to wait times for rides at Disney theme parks.

McDonald made the comments Monday morning, and faced a backlash from Capitol Hill almost immediately.

“Secretary McDonald’s preposterous statement is right out of Never Never Land,” Blunt said in a statement. “I call on him to resign because it’s clear he cannot prioritize getting our veterans the health care they deserve and have earned in a timely manner.”

One of the toughest condemnations came from Illinois Rep. Tammy Duckworth, a Democrat and Iraq war veteran who lost her legs in Iraq and still receives health care at a VA hospital.

“Comparing abhorrent wait times to a trip to Disneyland is unbelievably tone-deaf and hurtful to American heroes desperately in need of care,” she said in a statement. Duckworth, who is running for Senate, said McDonald “needs to comprehensively address the VA's systemic problems -- and that means reducing wait times, improving care and increasing patient satisfaction.”

Sen. Richard Blumenthal, D-Conn., top Democrat on the Senate Veterans Affairs Committee, also said he was “troubled” by the secretary’s comments and wants to speak with him.

Sen. Johnny Isakson, R-Ga., chairman of that committee, said in a statement he was “extremely disappointed in Secretary McDonald’s comparison of the deadly VA wait-time scandal to long lines at an amusement park.”

Even Disney pushed back on the secretary’s comments. A Disney Theme Parks representative told Independent Journal Review that they do in fact “take wait times very seriously” at their parks, and, “A large team of highly trained industrial engineers are tasked with improving our guest’s experiences, from transportation, to guest flow, to ride comfort and certainly wait times.”

McDonald made the comparison during a breakfast with reporters in Washington.

“When you go to Disney, do they measure the number of hours you wait in line? Or what's important? What's important is, what's your satisfaction with the experience?" McDonald said.

On Tuesday, he said in a statement it was never his intention "to suggest I don't take our mission of serving Veterans very seriously."

This is not make-believe, Mr. Secretary. Veterans have died waiting in those lines. https://t.co/OxfT3AYzTi

"On Monday, I made some remarks on how we’re working to improve Veterans' satisfaction with the care they receive from VA. It was never my intention to suggest that I don't take our mission of serving Veterans very seriously," he said.

Presumptive Republican presidential nominee Donald Trump used the remarks to hammer home his own message about the lingering problems at the VA.

The VA later issued a statement on Monday stressing that they are working to better serve America’s veterans.

“This is a solemn duty that we take seriously,” the statement said. “We know that Veterans are still waiting too long for care. In our effort to determine how we can better meet Veterans’ needs, knowing that their satisfaction is our most important measure, we have heard them tell us that wait times alone are not the only indication of their experience with VA and that’s why we must transform the way we do business.”

The VA went on to acknowledge that inaccurate figures can cause “unintended consequences and confusion” like the flawed and erroneous bookkeeping that was exposed in 2014. That year, reports broke that dozens of patients died while waiting for care and that VA employees at some locations made secret lists to hide long wait times. McDonald took over when his predecessor, Eric Shinseki, was forced out.

The VA is the only health care system that makes wait time information public.

Asked Monday by Fox News about wait times, McDonald acknowledged they have issues getting veterans in for care and said they’re working hard to address it.