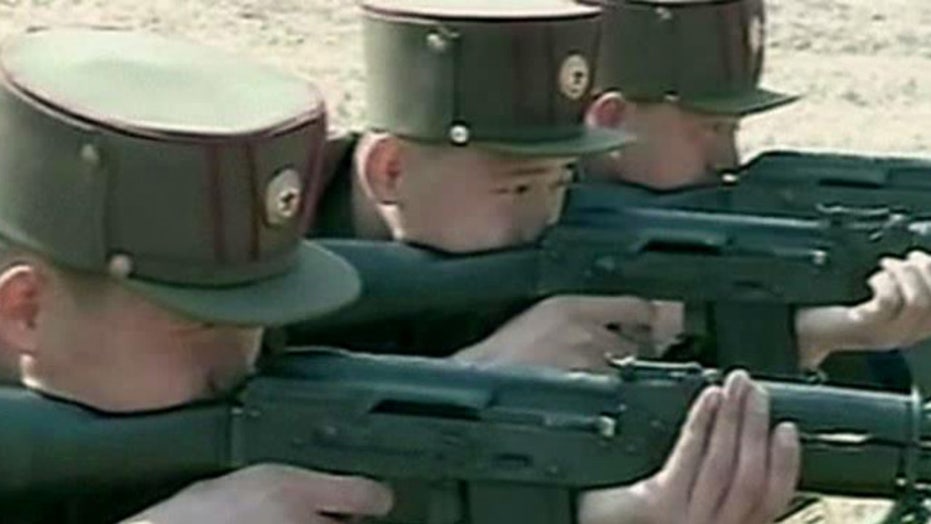 As the Pentagon flies B-2 bombers over the Korean Peninsula and strengthens its missile-defense posture in the region, U.S. officials are steadily working the diplomatic channels around North Korea -- in a bid to dial down tensions before things get "hotter."

Analysts largely consider the biggest threat from North Korea's daily provocations to be the possibility the regime could go too far in needling South Korea, prompting a military response that drags the U.S. and other allies into a broad conflict. Some have described that scenario as an "accidental" war -- meaning diplomacy is key in preventing that outcome.

Newly minted Secretary of State John Kerry is dabbling in several agenda items including trying to unfreeze Middle East peace talks, but is planning a round of meetings with North Korea's neighbors next week. He's also held talks with South Korean and Chinese officials in recent days.

Analysts say urging South Korea to show restraint while urging China to pressure Pyongyang should be at the top of the agenda.

The State Department confirmed Thursday that Kerry had a phone call on Wednesday with Chinese State Councilor Yang Jiechi to discuss North Korea as well as Kerry's upcoming visit to the region. Spokeswoman Victoria Nuland said China's role in pressuring North Korea has been the subject of "intense conversations" between Kerry and his Chinese counterparts.

She added: "It will be a central focus of the secretary's diplomacy when he's in Beijing, to see what more we can do to get the attention of the leadership in the DPRK." DPRK stands for the Democratic People's Republic of Korea, commonly known as North Korea.

Kerry plans to visit Beijing on April 13 as part of a tour across the Middle East and Asia. He'll be in Seoul, South Korea, on April 12 and Tokyo, Japan, on April 14.

Nuland described the visit as "very timely" and one that will give Kerry an "opportunity" to address North Korea's threats. Kerry earlier this week met with South Korean Foreign Affairs Minister Yun Byung-se in Washington.

The State Department has indicated it will not engage North Korea directly until it makes serious moves to come into compliance with international obligations. Kerry suggested Tuesday that U.S. Special Representative for North Korea Policy Glyn Davies is ready to engage when North Korea gets "serious about trying to resolve this issue."

Until then, North Korea's ally -- China -- is seen as perhaps the best avenue for affecting North Korea's behavior. Nuland said Thursday that the U.S. has enjoyed "good unity" with both China and Russia on North Korea, citing recent sanctions passed on the U.N. Security Council.

Diplomacy may be getting a second look as a way to dial down tensions after the Obama administration reportedly hit pause on its high-profile show-of-force strategy.

In recent days, the U.S. has flown B-52 and B-2 bombers, as well as F-22 jets, over the region. The Pentagon moved two guided-missile destroyers to waters off the Korean Peninsula, and is positioning other missile-defense assets in the region.

But The Wall Street Journal reported that the administration is pulling back on the demonstrations, out of concern that it could lead to "miscalculations" by the North Koreans.

Nuland stressed Thursday that the brinkmanship can be walked back.

"This does not need to get hotter," she said. "We can change course here if the DPRK will begin to come back into compliance with its international obligations, will begin to cool things down."

Earlier this week, White House Press Secretary Jay Carney said the U.S. is in "close contact" with Seoul and Tokyo and is "regularly reaching out to Beijing and Moscow to encourage them to do more to restrain the North Koreans."

He said it's "not a mystery" that China has influence over North Korea, and the U.S. is urging China to use that position to help change course.

"That is also true of our interactions with the Russians," he said. "This is a broad diplomatic effort that includes coordination with our allies in Japan and the Republic of Korea as well as with China and Russia and others."

Gordon Chang, author of "Nuclear Showdown: North Korea Takes on the World," told Fox News it's important for the U.S. to "reassure" South Korea with the shows of strength. But he also urged more tough talk with China.

Jim Walsh, an international security analyst and research associate with the Massachusetts Institute of Technology's Security Studies Program, said the reassurances have to be "strong" but not so over the top "that the other side freaks out and does something stupid."

He said the U.S. should continue talking to the Chinese and "trying to lower the temperature on this so people don't mess up."