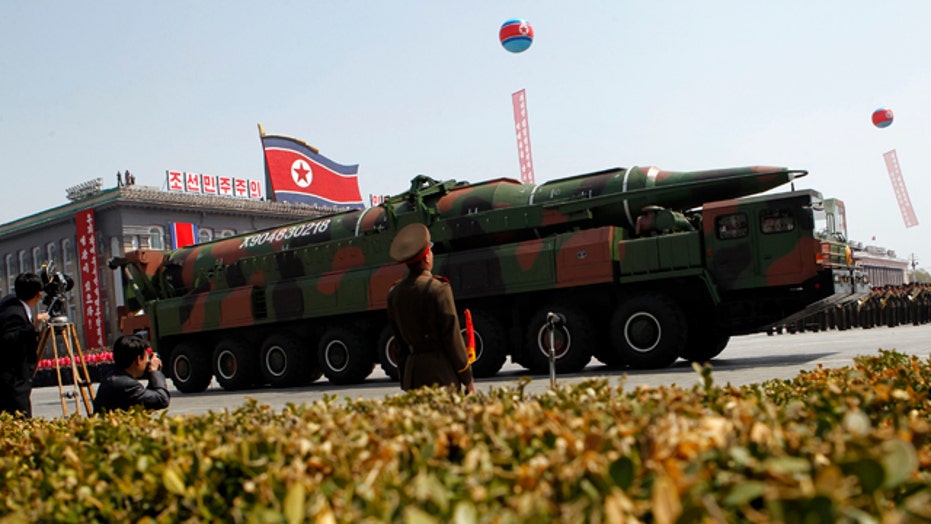 As tensions continued to mount on the Korean peninsula, the communist dictatorship in the North deployed mid-range missile launchers to its east coast and reportedly warned foreign embassies Friday it cannot guarantee the safety of diplomats after April 10.

Reuters reported early Friday that North Korea deployed two of its intermediate range missiles on mobile launchers and hid them on the east coast of the country, citing a South Korean news agency.

South Korea said Thursday North Korea moved a missile with "considerable range" to its east coast after an unnamed spokesman for the North Korean army warned the U.S. Wednesday that its military has been cleared to wage an attack using "smaller, lighter and diversified nuclear" weapons.

Meanwhile, the United Kingdom foreign office confirmed in a statement Friday that North Korea asked a number of foreign embassies in Pyongyang  to consider moving staff out since they could not assure their safety in the event of conflict.

"We are consulting international partners about these developments.  No decisions have been taken, and we have no immediate plans to withdraw our Embassy,”  the UK foreign office statement said.

Under the Vienna Convention that governs diplomatic missions, host governments are required to assist in the evacuation of embassy staff from the country in the event of conflict.

North Korea has railed for weeks against joint U.S. and South Korean military exercises taking place in South Korea and has expressed anger over tightened sanctions for a February nuclear test.

``The current question was not whether, but when a war would break out on the peninsula,'' because of the ``increasing threat from the United States'', China's state news agency Xinhua quoted the North's Foreign Ministry as saying, according to a Reuters report.

"It is yet another offering in a long line of provocative statements that only serve to further isolate North Korea from the rest of the international community and undermine its goal of economic development," she said. "North Korea should stop its provocative threats and instead concentrate on abiding by its international obligations."

South Korean Defense Minister Kim Kwan-jin dismissed reports in the Japanese and South Korean media that the missile moved this week could be a KN-08, which is believed to be a long-range missile that if operable could hit the United States.

Kim told lawmakers at a hearing that the missile's range is considerable but not far enough to hit the U.S. mainland. He said he did not know the reasons behind the missile movement, saying it "could be for testing or drills."

The range he described could refer to a mobile North Korean missile known as the Musudan, which has a range of 1,800 miles. That would make Japan and South Korea potential targets, but little is known about the missile's accuracy.

Despite North Korea's rhetoric, analysts say they do not expect a nuclear attack, which knows the move could trigger a destructive, suicidal war that no one in the region wants.

``The rhetoric is off the charts,'' said Victor Cha, former director for Asian affairs at the White House National Security.

Following through on one threat Wednesday, North Korean border authorities refused to allow entry to South Koreans who manage jointly run factories in the North Korean city of Kaesong.

Washington calls the military drills, which this time have incorporated fighter jets and nuclear-capable stealth bombers, routine annual exercises between the allies. Pyongyang calls them rehearsals for a northward invasion.

Fox News' Justin Fishel and the Associated Press contributed to this report.