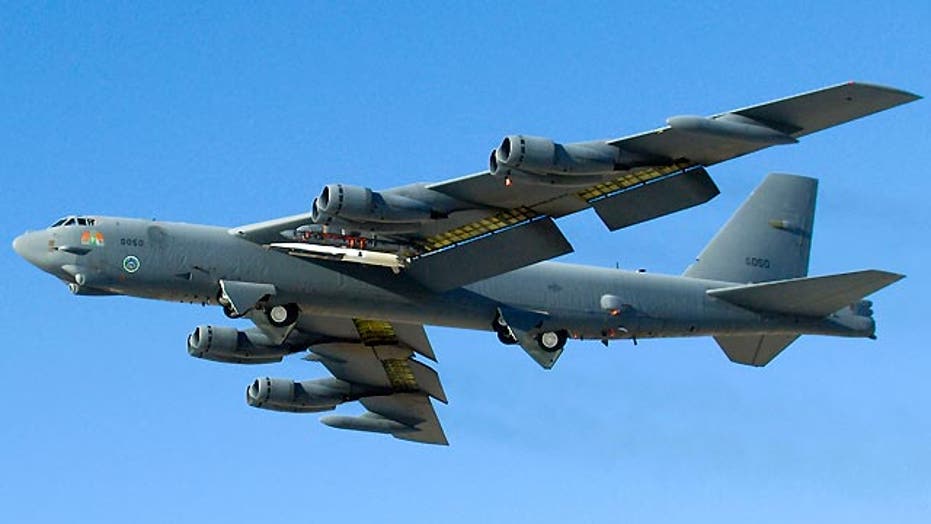 War Games: B-52 the Flying Fortress

With North Korea's bellicose rhetoric escalating by the day -- on Wednesday a spokesman said its military has been cleared to wage a nuclear attack -- the annual U.S. training exercise Foal Eagle continues just over the border.

Foal Eagle, which began March 1 and will run through April 30 in conjunction with South Korea, includes a nuclear attack submarine, F-22s and B-2 Stealth bombers, and the nuclear-capable B-52s Stratofortress, a veteran aircraft that can drop the largest array of weapons in the U.S. inventory.

The behemoth is the biggest bomber that the Air Force flies. It's so big that it takes 32 airmen more than 12 hours to wash one. The B-52 can do just about anything from nuclear weapon deployment to close air support.

And this American classic has been making headlines a lot lately.

Beyond the annual Foal Eagle training exercise, Americans across the nation were outraged when &quotThe Amazing Race&quot used the wreckage of a B-52 shot down in Vietnam as a prop recently, asking contestants to sing communist songs. CBS later apologized for the insensitive show.

It's served the military well for more than half a century.

Inside an American classic
Capable of flying at altitudes of 50,000 feet, the aircraft has a 185-foot wingspan and is nearly 160 feet long. The long-range B-52 heavy bomber flies at subsonic speeds and provides a global strike capability.

Precision guided missiles, gravity and cluster bombs are just a few of the payloads the B-52 can deliver against targets – a single B-52 can launch a whopping 70,000 pounds of mixed ordnance.

The latest version, the B-52H, can carry up to 20 air-launched cruise missiles, or nuclear weapons for precision delivery anywhere in the world.

The aircraft plays other critical roles beyond attack such as providing critical surveillance and monitoring capabilities.

According to the Air Force, just two B-52s can monitor 140,000 square miles in a mere two hours -- that’s like scanning an area larger than the size of Great Britain and Newfoundland combined.

The aircraft can be kitted out with electro-optical viewing sensor systems and forward-looking infrared.

Remarkably, the B-52 has unlimited combat range. The bomber can be refueled while in flight. A KC-135 Stratotanker, for example, can deploy to keep a mission going. Without refueling, it has a range of around 8,800 miles.

In 1989, modernizing updates began, incorporating GPS and adaptations to carry 2,000-pound munitions, according to the Air Force. Developing a full array of advance weapons is also underway.

Maintaining 50-year-young legends
Some of the B-52s are 50 years young -- meaning the dedication of crew chiefs and maintenance crews has been essential to maintaining this legendary aircraft.

After 450 hours or 24 months, the bomber’s parts are checked and rechecked. Subjected to a thorough intensive inspection, damaged pieces and key components are replaced.

Often 120 people will work around the clock.

These teams have ensured that the B-52s get airborne and return safely. They have kept the versatile aircraft in service for almost 60 years.

Proud Deployment History
Entering service in 1954, the B-52 Stratofortresses have been operating for nearly 60 years.

The B-52s delivered a whopping 40 percent of all the weapons dropped by all the coalition forces during Desert Storm, according to USAF statistics.

During Operation Enduring Freedom, they provided close air support through the use of precision-guided munitions.

The Air Force regularly deploys the B-52s with a bomber program based in Guam.

Every year, the B-52s participate in a number of training exercises.

The Global Strike Challenge, for example, is an opportunity for teams 96th Bomb Squadron setting up a a B-52H, aerial refueling training, flying mission at the range and landing.

In Red Flag, another exercise with longstanding US allies, attack, air superiority, defense suppression are practiced to improve rapidly standing up combat and cooperation with partners.