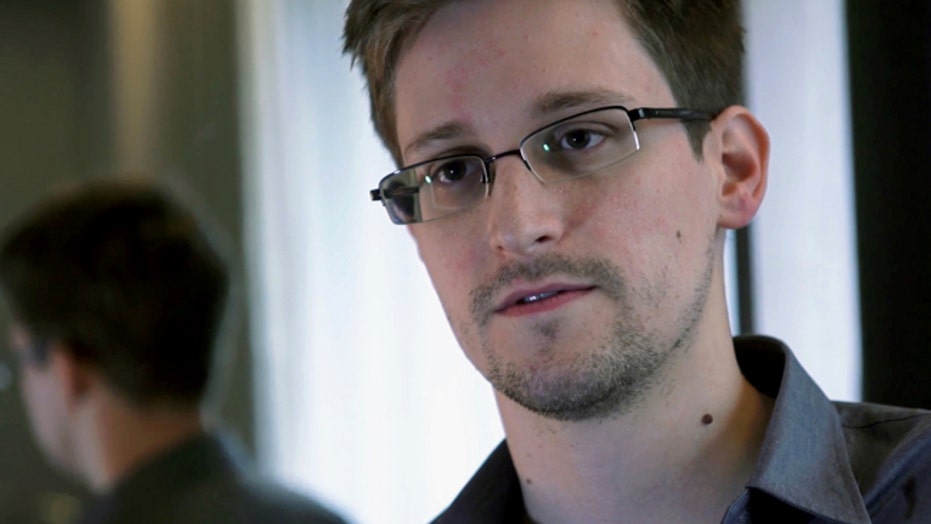 NSA leaker on the run

The announcement came as a source confirmed to Fox News Saturday that the United States revoked Snowden's passport.

Snowden took flight Sunday in evasion of U.S. authorities, seeking asylum in Ecuador and leaving the Obama administration scrambling to determine its next step in what became a game of diplomatic cat-and-mouse.

The former National Security Agency contractor and CIA technician fled Hong Kong and arrived at the Moscow airport, where he planned to spend the night before boarding an Aeroflot flight to Cuba. Ecuador's Foreign Minister Ricardo Patino said his government received an asylum request from Snowden, and the anti-secrecy group WikiLeaks said it would help him.

"He goes to the very countries that have, at best, very tense relationships with the United States," said Rep. Ileana Ros-Lehtinen, R-Fla., adding that she feared Snowden would trade more U.S. secrets for asylum. "This is not going to play out well for the national security interests of the United States."

The move left the U.S. with limited options as Snowden's itinerary took him on a tour of what many see as anti-American capitals. Ecuador in particular has rejected the United States' previous efforts at cooperation, and has been helping WikiLeaks founder, Julian Assange, avoid prosecution by allowing him to stay at its embassy in London.

"The United States has been in touch via diplomatic and law enforcement channels with countries in the Western Hemisphere through which Snowden might transit or that could serve as final destinations," a State Dept. official told Fox News. "The U.S. is advising these governments that Snowden is wanted on felony charges, and as such should not be allowed to proceed in any further international travel, other than is necessary to return him to the United States."

Snowden helped The Guardian and The Washington Post disclose U.S. surveillance programs that collects vast amounts of phone records and online data in the name of foreign intelligence, but often sweeping up information on American citizens. Officials have the ability to collect phone and Internet information broadly but need a warrant to examine specific cases where they believe terrorism is involved.

Snowden has been in hiding for several weeks in Hong Kong, a former British colony with a high degree of autonomy from mainland China. The United States formally sought Snowden's extradition from Hong Kong but was rebuffed; Hong Kong officials said the U.S. request did not fully comply with their laws.

The Justice Department rejected that claim, saying its request met all of the requirements of the extradition treaty between the U.S. and Hong Kong.

A State Department official said the United States was in touch through diplomatic and law enforcement channels with countries that Snowden could travel through or to, reminding them that Snowden is wanted on criminal charges and reiterating Washington's position that Snowden should only be permitted to travel back to the U.S.

The Justice Department said it would "pursue relevant law enforcement cooperation with other countries where Mr. Snowden may be attempting to travel."

The White House would only say that President Barack Obama had been briefed on the developments by his national security advisers.

Russia's state ITAR-Tass news agency and Interfax cited an unnamed Aeroflot airline official as saying Snowden was on the plane that landed Sunday afternoon in Moscow.

Upon his arrival, Snowden did not leave Moscow's Sheremetyevo Airport. One explanation could be that he wasn't allowed; a U.S. official said Snowden's passport had been revoked, and special permission from Russian authorities would have been needed.

"It's almost hopeless unless we find some ways to lean on them," said Rep. Peter King, R-N.Y.

The Russian media report said Snowden intended to fly to Cuba on Monday and then on to Caracas, Venezuela.

U.S. lawmakers scoffed. "The freedom trail is not exactly China-Russia-Cuba-Venezuela, so I hope we'll chase him to the ends of the earth, bring him to justice and let the Russians know there'll be consequences if they harbor this guy," said Sen. Lindsey Graham, R-S.C.

With each suspected flight, efforts to secure Snowden's return to the United States appeared more complicated if not impossible. The United States does not have an extradition treaty with Russia, but does with Cuba, Venezuela and Ecuador. Even with an extradition agreement though, any country could give Snowden a political exemption.

The likelihood that any of these countries would stop Snowden from traveling on to Ecuador seemed unlikely. While diplomatic tensions have thawed in recent years, Cuba and the United States are hardly allies after a half century of distrust.

Venezuela, too, could prove difficult. Former President Hugo Chavez was a sworn enemy of the United States and his successor, Nicolas Maduro, earlier this year called Obama "grand chief of devils." The two countries do not exchange ambassadors.

U.S. pressure on Caracas also might be problematic given its energy exports. The U.S. Energy Information Agency reports Venezuela sent the United States 900,000 barrels of crude oil each day in 2012, making it the fourth-largest foreign source of U.S. oil.

"You have to have a country that's going to stand up to the United States," Ratner said. "You're not talking about a huge range of countries here."

That is perhaps why Snowden first stopped in Russia, a nation with complicated relations with Washington.

"Allies are supposed to treat each other in decent ways, and Putin always seems almost eager to put a finger in the eye of the United States," Schumer said. "That's not how allies should treat one another, and I think it will have serious consequences for the United States-Russia relationship."

"I am very worried about what else he has," said Rep. Loretta Sanchez, a California Democrat who sits on the House Homeland Security Committee.

Sen. Dianne Feinstein, the chairwoman of the Senate Intelligence Committee, said she had been told Snowden had perhaps more than 200 sensitive documents.

Ros-Lehtinen and King spoke with CNN. Graham spoke to "Fox News Sunday." Schumer was on CNN's "State of the Union." Sanchez appeared on NBC's "Meet the Press." Feinstein was on CBS' "Face the Nation."