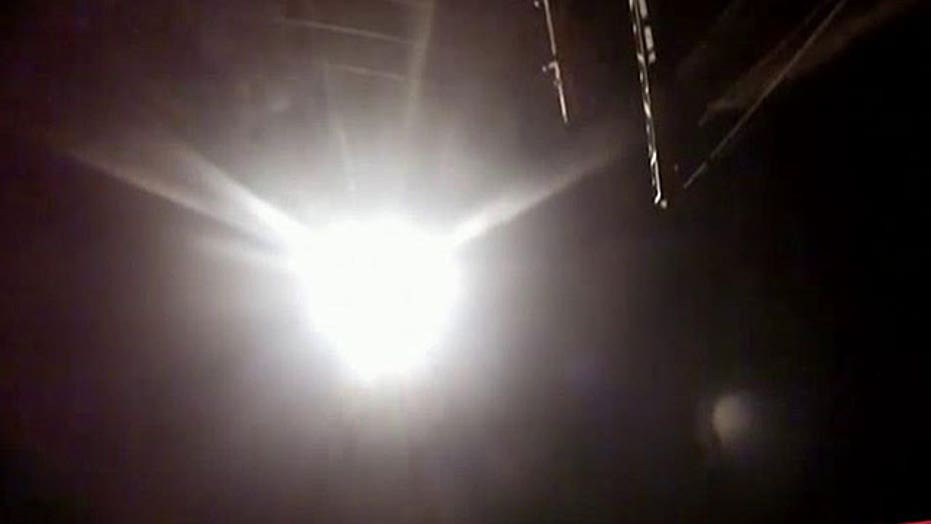 The United States, joined by five Arab allies, launched an intense campaign of airstrikes, bombings and cruise-missile attacks against the Islamic State and another militant group in Syria Monday night – marking the first U.S. military intervention in Syria since the start of that country’s civil war in 2011.

"We're going to do what's necessary to take the fight to this terrorist group," President Obama said Tuesday, before traveling to New York for meetings at the U.N. He cautioned that the effort "will take time."

Lt. Gen. William Mayville Jr., director of operations for the Joint Chiefs of Staff, described the operation as "the beginnings of a sustained campaign." The strikes in Syria "destroyed or damaged" multiple targets, according to the U.S. military, which reported "all aircraft safely exited the strike areas."

The mission was not limited to hitting Islamic State positions. Centcom said that U.S. aircraft also struck eight targets associated with another terrorist group called the Khorasan Group, made of up Al Qaeda veterans. Those strikes, near the northwestern Syrian city of Aleppo, targeted training camps, a munitions production facility, a communication building and command-and-control facilities.

Centcom said the Khorasan Group was involved in "imminent attack plotting against the United States and Western interests."

The military strikes come less than two weeks after Obama, on Sept. 10, authorized U.S. airstrikes inside Syria as part of a broad campaign to root out the militants. The strikes ostensibly put the United States, for now, on the same side as Bashar Assad, the Syrian strongman whose ouster Obama once sought -- though the Assad regime was not involved in Monday's strikes.

Syria's Foreign Ministry told the Associated Press that the U.S. informed Syria's envoy to the U.N. that "strikes will be launched against the terrorist Daesh group in Raqqa." The statement used an Arabic name to refer to the Islamic State group, which is more commonly known as ISIS or ISIL.

State Department spokeswoman Jen Psaki made clear in a statement Tuesday that the U.S. "did not request the regime's permission" and had warned the Syrian government "not to engage U.S. aircraft."

"We did not coordinate our actions with the Syrian government," she said.

U.S. officials said that the airstrikes began around 8:30 p.m. ET, and were conducted by the U.S., Bahrain, Qatar, Saudi Arabia, Jordan and the United Arab Emirates. The first wave of strikes finished about 90 minutes later, though the operation was expected to have lasted several hours.

"We believe we hit, largely, everything we were aiming at," Pentagon spokesman Rear Adm. John Kirby told Fox News. Kirby said the military made the decision to strike early Monday.

Obama, in announcing plans for an expanded campaign against ISIS earlier this month, said: “I have made it clear that we will hunt down terrorists who threaten our country, wherever they are. That means I will not hesitate to take action against ISIL in Syria, as well as Iraq."

The following day, at a conference with Secretary of State John Kerry, key Arab allies promised they would "do their share" to fight the Islamic State militants. The Obama administration, which at a NATO meeting in Wales earlier this month also got commitments from European allies as well as Canada and Australia, has insisted that the fight against the Islamic State militants could not be the United States' fight alone.

Until now, U.S. airstrikes have been limited to specific missions in northern Iraq, where 194 missions have been launched since August 8. Lawmakers and military advisers, though, had stressed for weeks that any campaign against the Islamic State would have to include action in Syria, where the militant network is based.

"To defeat ISIS, we must cut off the head of the snake, which exists in Syria," Rep. Michael McCaul, R-Texas, said in a statement late Monday. "I support the administration’s move to conduct airstrikes against ISIS wherever it exists."

A senior official told Fox News that Obama was briefed by military officials on the operation throughout the night. Earlier in the evening, the president spoke to House Speaker John Boeher, R-Ohio, and House Minority Leader Nancy Pelosi, D-Calif. A White House official also updated House Majority Leader Kevin McCarthy, R-Calif., on the progress of the airstrikes.

Because the United States had stayed out of the Syria conflict for so long, the Obama administration had spent the last several weeks scrambling to gather intelligence about possible targets in Syria, launching surveillance missions over the country last month.

Syrian activists reported several airstrikes on militant targets in the northern city of Raqqa, ISIS's main base. One Raqqa-based activist, speaking on condition of anonymity, told AP that the airstrikes lit the night sky over the city, and reported a power cut that lasted for two hours.

The head of the main Western-backed Syrian opposition group, Hadi Bahra, welcomed the commencement of airstrikes in Syria.

"Tonight, the international community has joined our fight against ISIS in Syria," he said in a statement.  "We have called for airstrikes such as those that commenced tonight with a heavy heart and deep concern, as these strikes begin in our own homeland. We insist that utmost care is taken to avoid civilian casualties."

Centcom said that other airstrikes hit ISIS targets near the Syrian cities of Dayr az Zawr, Al Hasakah, and Abu Kamal. Also, the U.S. carried out four airstrikes against ISIS in northern Iraq, southwest of the city of Kirkuk.

Military leaders have said about two-thirds of the estimated 31,000 Islamic State militants were in Syria.

Some officials have expressed concern that going after Islamic State militants in Syria could inadvertently help Assad, since the militants are fighting in part to overthrow Assad.

Urged on by the White House and U.S. defense and military officials, Congress passed legislation late last week authorizing the military to arm and train moderate Syrian rebels. Obama signed the bill into law Friday, providing $500 million for the U.S. to train about 5,000 rebels over the next year.

The militant group, meanwhile, has threatened retribution. Its spokesman, Abu Mohammed al-Adnani, said in a 42-minute audio statement released Sunday that the fighters were ready to battle the U.S.-led military coalition and called for attacks at home and abroad.