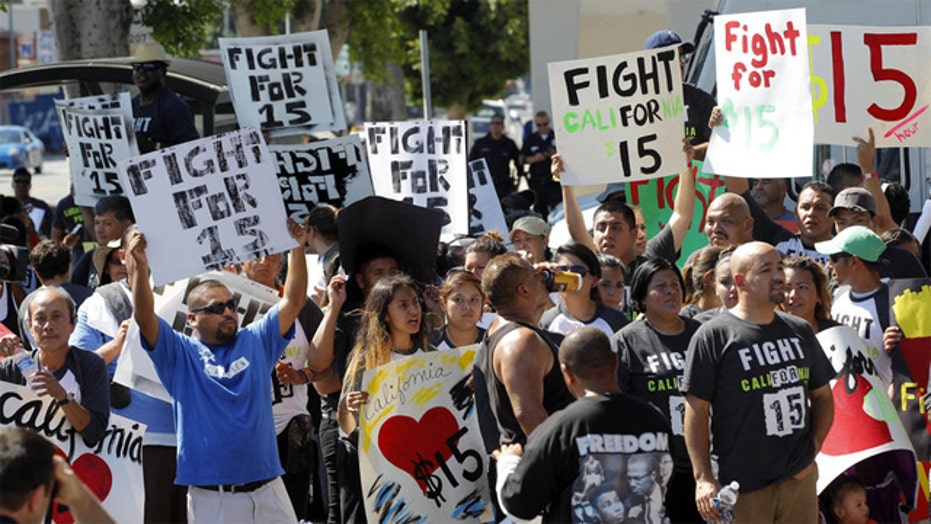 Union leaders in Los Angeles are being accused of hypocrisy after being caught trying to exempt themselves from a new minimum wage law they tried to impose on others.

For months, organized labor went after companies like McDonalds and Walmart, shaming any business that paid the old minimum wage. Carrying signs saying, "We see greed" and "We are worth more," union members marched outside businesses and appeared at City Council meetings demanding Los Angeles raise the minimum wage from $9 to $15 by 2020.

"We say, 'Don't leave anybody out, don't cut anybody out, a wage raise for all workers!'" Mary Elena Durazo, the longtime leader of the 600,000-strong Los Angeles County Federation of Labor AFL-CIO, told a cheering crowd of supporters at a recent council meeting.

Yet after pushing through the new wage law, union officials are asking for a waiver that would allow any company that unionizes to avoid paying the minimum wage.

"It was a real surprise that in the 11th hour that labor was saying, 'well, we basically support a sub-minimum wage if a company decides to enter into collective bargaining,'" Los Angeles City Councilman Mitch O'Farrell said. "And that really is a complete contradiction to what they've been saying the last couple of months."

Councilmen Mike Bonin and O'Farrell are opposing the move.

"It is not acceptable to expect the L.A. City Council to become a vehicle for union organizing," said O'Farrell. "That is not what we were elected to do and that is not what I will engage in."

Bonin agreed, telling the Los Angeles Times, "For me, the point of the minimum wage in Los Angeles was to raise wages and lift [everyone] out of poverty."

What especially angered opponents was unions' attitude toward others who asked for waivers. Restaurants, nonprofits and businesses with fewer than 25 employees asked for a one-year delay. Unions opposed it, calling the 'loophole' unfair to the working poor.

Rusty Hicks -- current president of the L.A. Federation of Labor, who replaced Durazo after she left to head a casino-and-hotel worker union -- argued, "it is critical that no Angeleno, whether they're workers or owners of small businesses and nonprofits, is left behind."

But Wednesday night, Hicks changed his position, telling the council that workers who collectively bargain for wages below the minimum shouldn't be penalized. He and labor attorney Margo Feinberg say federal law protects workers who choose collective bargaining.

"This is a standard clause to protect basic worker rights," Hicks said in a statement.

He's right. Minimum wage ordinances in Chicago, Milwaukee, Oakland, San Francisco and San Jose contain provisions similar to the one labor sought in Los Angeles. The municipal code in San Jose says, "all or any portion of the (ordinance) may be waived in a bona fide collective bargaining agreement."

Business groups, however, claim it's a blatant double standard.

"When unions do something like this, it demonstrates that their rhetoric about low wages is hollow," said the National Federation of Independent Business' Andrew Wimer. "They seem perfectly willing to see workers paid less if it means getting more power for themselves."

"The unions are being too cute by half," added Jot Condie of the California Restaurant Association. "They spent the last few months table-pounding against any exemptions or mitigations to the minimum wage increase -- suggesting no one should get special treatment. Now it is clear they recognize the need for those mitigations and have asked for special treatment for themselves."

O'Farrell said the law is likely to go through without any exemptions, though unions are expected to try again. The local AFL-CIO declined to answer questions submitted by Fox News.