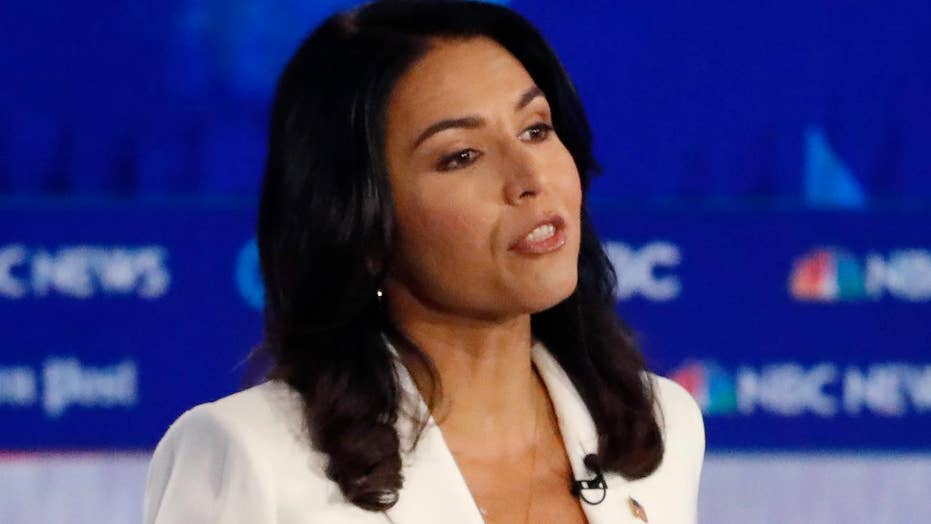 Rep. Tulsi Gabbard, D-Hawaii, announced late Monday that she won't be attending the Democrats' next debate "regardless" of whether she qualifies.

Gabbard, who previously flirted with the idea of skipping an earlier debate, appeared more assertive about bowing out of the upcoming debate being hosted by PBS and Politico on Dec. 19.

"For a number of reasons, I have decided not to attend the December 19th 'debate' — regardless of whether or not there are qualifying polls," Gabbard tweeted. "I instead choose to spend that precious time directly meeting with and hearing from the people of New Hampshire and South Carolina."

Gabbard had met the donor requirement to qualify for the December debate but had yet to meet a requirement that she earn 4-percent support in at least four national or early-state polls approved by the Democratic National Committee [DNC] -- or hit 6 percent in two approved early-state polls. The cutoff date: Dec. 12.

Last week's sudden exit from the 2020 race by Sen. Kamala Harris, D-Calif., had caused a panic among some people in the party over the remaining candidates set to participate in the upcoming debate, all of whom are white.

The other candidates of color had yet to meet both requirements set by the DNC to participate in the December debate. The other requirement: having at least 200,000 unique donors.

Tech businessman Andrew Yang, like Gabbard, has met the donor requirement but was one poll shy of qualifying for this month's debate.

Sen. Cory Booker, D-N.J., and former Housing and Urban Development Secretary Julián Castro have both met the donor requirement but have not clinched any qualifying polls so far.