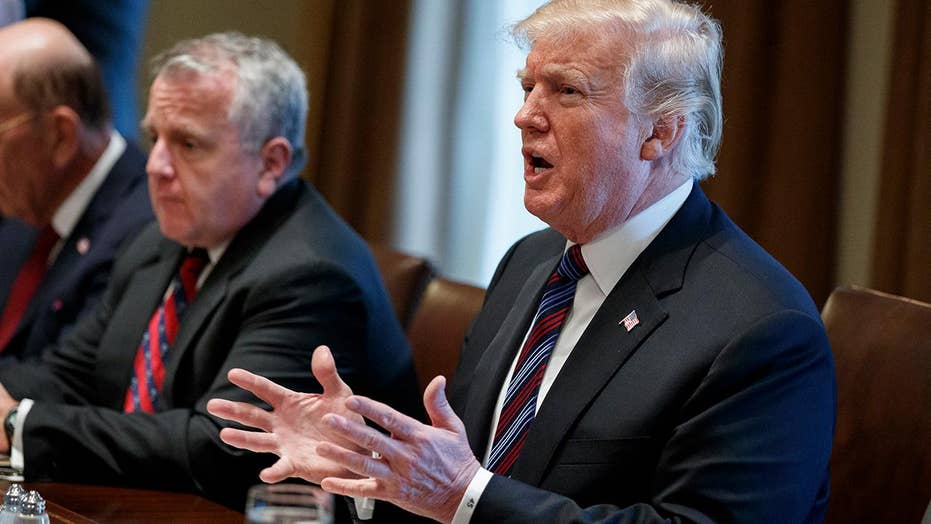 If the "big, beautiful wall" along the U.S.-Mexico border doesn't get built -- and soon -- troops will come, President Trump vowed Tuesday while he tries to make his campaign promise a reality.

Trump said he discussed bringing in reinforcements with Defense Secretary Jim Mattis as he awaits the completion of the structure, which is estimated to cost around $25 billion.

"We're going to be doing things militarily," Trump said at a lunch with Baltic leaders. "Until we can have a wall and proper security, we're going to be guarding our border with the military."

Trump called the decision to get the National Guard involved in helping monitor the border a "big step." However, the move wouldn't be completely unprecedented -- the U.S. National Guard has deployed troops to the border in the past at the command of the president.

Both Presidents George W. Bush and Barack Obama have previously called on the National Guard to assist with border patrol.

Obama sent about 1,200 National Guard troops to the U.S.-Mexico border in 2010 to beef up efforts to battle drug smuggling and illegal immigration. An administration official described Obama's plan to Fox News in May 2010 as "part of his comprehensive plan to secure the southwest border."

Under what later became a two-year operation known as "Jump Start," 6,000 National Guard troops were sent to assist the border patrol with non-law enforcement duties while additional border agents were hired and trained. Over those years, about 29,000 National Guard forces participated, as forces rotated in and out.

"Support from the National Guard - but yet a clear division: them not arresting, not engaging in enforcement activities directly attributed to any illegal crossings of either aliens, narcotics or things of that nature ... has worked out very well."

"I will not stand idly by while our citizens are under assault and little children from Central America are detained in squalor," Perry said at the time.

The deployment of troops cost Texas roughly $12 million per month, KXAS reported at the time.

The U.S. Army has also documented several cases of lending support to the southwest border. National Guard soldiers "act as the eyes and ears for the Border Patrol, but by law, do not participate in an enforcement role," the U.S. Army explains on its website. Instead, they're used for surveillance, communications, administrative support, intelligence, analysis and the installation of border security infrastructure.

"The National Guard has been providing Southwest border support for a number of years through our Counterdrug ... program," said Army Maj. Gen. Peter Aylward in a 2010 Army blog post. "Support from the National Guard - but yet a clear division: them not arresting, not engaging in enforcement activities directly attributed to any illegal crossings of either aliens, narcotics or things of that nature ... has worked out very well."

The Defense Department is currently offering some support to the border, including U.S. Navy ships patrolling waters to seize drugs as well as missions involving over 100 personnel from the U.S. military’s northern command -- including eight planes and a drone -- to help border patrol.

Trump did not offer specifics for his plan Tuesday, but the move appears to be at least partly motivated by a caravan of more than 1,000 Central American migrants heading toward the U.S. border.

"I said [to Mexican officials], 'I hope you're going to tell that caravan not to get up to the border.' And I think they're doing that because, as of 12 minutes ago, it was all being broken up," Trump said, appearing to take credit Tuesday for halting a caravan of about 1,100 migrants.