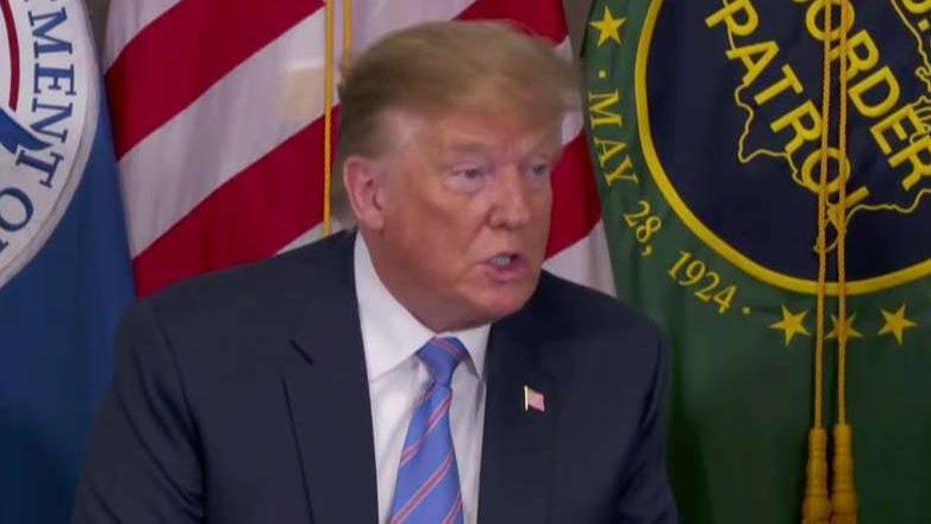 President Trump's message to illegal immigrants: The country is full, turn around

President Trump on Friday visited the southern border amid an escalating immigration crisis, saying that “our country is full” and warning potential migrants thinking about crossing into the U.S. that this country "can’t take you anymore.”

TRUMP CONFIRMS HE NIXED ICE DIRECTOR NOMINATION, SAYS HE WANTS TO GO 'IN A TOUGHER DIRECTION'

Trump also toured a two-mile border stretch of 30-foot fencing in the area, which has recently been rebuilt. Trump has used that barrier to declare that his central campaign promise of a wall on the southern border is being fulfilled despite significant opposition in Congress.

“It looks great, it’s better and much more effective than previous wall, and we can actually do it faster and it’s less expensive, if you can believe it,” he told reporters in front of the barrier.

The White House says the barrier is marked with a plaque bearing Trump's name and those of top Homeland Security officials. During the roundtable, officials also handed the commander in chief a plaque that contained a piece of the rebuilt barrier.

Trump declared a national emergency on the border in February after Congress agreed to only a fraction of the $5.6 billion he had requested for the wall. That declaration, which was opposed by Democrats and some Republicans, gives the administration access to more than $3 billion in funding that can be used on the wall.

But statistics show that there has been a surge in border crossings in recent months, and the administration has struggled to cope. Customs and Border Protection (CBP) officials said last week that the U.S. was on track to apprehend more than 100,000 border crossers in March -- marking a 12-year high. Department of Homeland Security Secretary Kirstjen Nielsen has said the administration is treating it as a “Cat 5 hurricane disaster.”

Trump said at the roundtable that since October, agents in the El Centro sector in Southern California have seen a nearly 400 percent increase in family units arriving in the sector.

“It’s a colossal surge, and its overwhelming our immigration system, and we can’t let that happen,” he said.

Gloria Chavez, CBP's chief patrol agent for the El Centro sector, welcomed Trump and told reporters that since the barrier has been rebuilt, assaults on Border Patrol agents have dropped by 60 percent in the area, while illegal entries have dropped by 75 percent.

Trump has escalated his rhetoric on immigration in recent days, threatening to close the border if Mexico does not stop the flows of migrants and if Congress does not act to end what he calls “loopholes” in immigration law that allow detained migrants to be released into the U.S. until a scheduled court date. 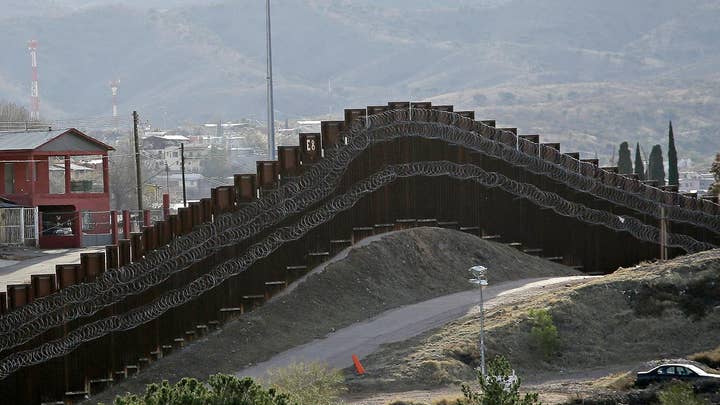 He had said last week that he was prepared to close the border this week, but on Thursday he appeared to back away from that threat and said he was giving Mexico a “one-year warning,” and also threatened tariffs on cars from Mexico.

On Friday, he told reporters that Mexico has done more in the last four days to stop migrants coming across the border, but he said he was prepared to slap a 25 percent tariff on cars coming from Mexico if that does not continue.

“I never changed my mind, I may shut it down at some point, but I’d rather do tariffs. Mexico, I have to say has been very very good over the last four days...if they continue that everything will be fine, if they don’t we’re going to tariff cars at 25 percent coming into the United States,” he said.

He also said he was considering separate economic penalties over drugs “coming in through the southern border and killing our people” although he did not specify what those penalties would be.

As a sign that he wants his administration to do more to crack down on illegal immigration, Trump confirmed on Friday that he has pulled the nomination of Ron Vitiello to lead Immigration and Customs Enforcement (ICE), saying his administration will go “in a tougher direction.”

After the border visit, Trump is scheduled to appear in fundraisers in Los Angeles and Las Vegas, and address the Republican Jewish Coalition.