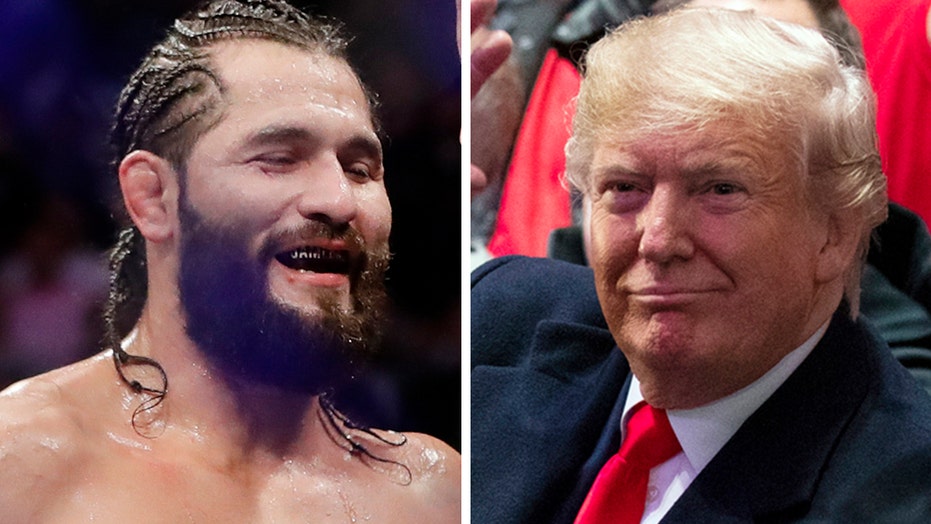 President Trump congratulated UFC fighter Jorge Masvidal on his victory over Nate Diaz in the octagon Saturday night, re-tweeting a video in which the mixed-martial artist called him a “bad motherf-----.”

Trump had attended the UFC 244 bout Saturday night at Madison Square Garden in New York City, watching as No. 3-ranked Masvidal improved his record to 35-13 on a technical knockout when a gash split open over Diaz’s right eye after the third round and a doctor called off the match.

“Great fight Champ!” Trump wrote Sunday morning on Twitter, retweeting a video of the American fighter in the days ahead of his bout with Diaz.

The video clip showed Masvidal apparently speaking to a reporter about his thoughts on the president.

In a second tweet, Trump likened the energy of his reception at the Garden to one of his Trump rallies.

“Walking into Madison Square Garden last night with @danawhite for the big @UFC Championship fight was a little bit like walking into a Trump Rally,” he wrote. “Plenty of MAGA & KAG present. Great energy. Fantastic job Dana! Heading to D.C. and then to Kentucky for a big @MattBevin Rally…”

However, the type of reception that greeted Trump at the Garden has been a point of disagreement.

Other Twitter users maintained Trump received more boos than cheers. However, Newsday of Long Island's Mark La Monica tweeted the reception was "nothing like at Nats game,” referring to Game 5 of the World Series last Sunday where it seemed booing drowned out the cheers for the president.

Donald Trump Jr. disputed claims of a negative reception, writing on Twitter that their entrance was “overwhelmingly positive,” and that UFC President Dana White called it “the most electrifying entrance” he’s seen in his 25 years in the business.

Trump is set to try electrifying a Kentucky crowd at an election-eve rally Monday in Lexington on behalf of Republican Gov. Matt Bevin’s reelection bid.