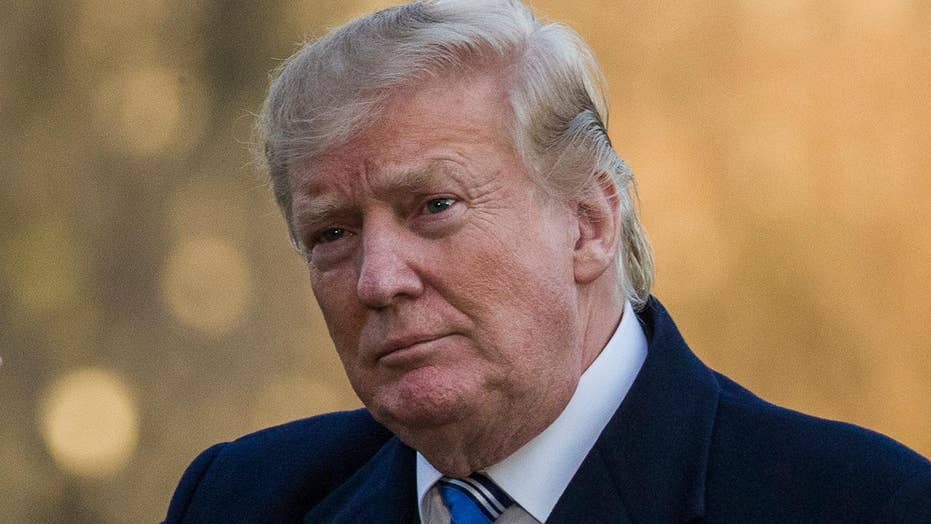 The White House hopes to engage Democrats in their top budget priorities in an effort to finding common ground; Kevin Corke breaks down the proposal.

President Trump will soon formally seek a total of $8.6 billion in new border wall funding from Congress as part of the White House's upcoming budget proposal for the next fiscal year, three sources close to the budget process tell Fox News, although the aggressive request faces all-but-certain rejection in Congress amid a growing crisis at the southern border.

The budget is also expected to seek money to establish the Space Force as a new branch of the military, and to sharply curb spending on domestic safety-net programs. The outline includes a total of $2.7 trillion in nondefense spending cuts and the administration says its proposals would put the federal government on track to balance the budget by 2034.

“In the last two years, President Trump and this Administration have prioritized reining in reckless Washington spending. The Budget that we have presented to Congress and the American people ... embodies fiscal responsibility, and takes aim at Washington’s waste, fraud, and abuse,” said Office of Management and Budget Acting Director Russ Vought said in a statement Sunday night. Our national debt nearly doubled under the previous Administration and now stands at more than $22 trillion. This Budget shows that we can return to fiscal sanity without halting our economic resurgence while continuing to invest in critical priorities.”

According to the sources, Trump will look to secure $5 billion from Congress, plus $3.6 billion from the military construction budget, for the fiscal year 2020. The request is coming on top of the $8.1 billion Trump already has access to, which includes money he's trying to shift from military accounts after declaring a national emergency.

Trump invoked the emergency declaration last month after Congress denied his request for $5.7 billion. Instead, Congress approved nearly $1.4 billion for the border barriers, far less than he wanted.

FILE - In this Nov. 25, 2018 file photo, a migrant runs from tear gas launched by U.S. agents, amid members of the press covering the Mexico-U.S. border, after a group of migrants got past Mexican police at the Chaparral crossing in Tijuana, Mexico. (AP Photo/Rodrigo Abd, File)

Armed with the $8.1 billion of wall funding currently available in the fiscal year 2019 budget, and the approximately 122 miles of wall completed or in progress from the last two fiscal years, the Trump administration already has the money to build more than half of the targeted 722 miles of wall along the southern border, Fox News is told.

This $8.6 billion request for fiscal year 2020 would allow the administration to more than complete the promised 722 miles, and White House officials tell Fox News that with the crisis worsening at the border, those funds are more important than ever. The New York Times, citing government statistics, reported last week that the number of migrant families crossing the southwest border has hit an 11-year high, causing major humanitarian concerns.

FILE - In this Dec. 2, 2018 file photo, a Honduran migrant helps a young girl cross to the American side of the border wall, in Tijuana, Mexico. (AP Photo/Ramon Espinosa, File)

FILE - In this Nov. 25, 2018 file photo, Mexican police run as they try to keep migrants from getting past the Chaparral border crossing in Tijuana, Mexico, near San Ysidro, Calif. (AP Photo/Ramon Espinosa, File)

“President Trump hurt millions of Americans and caused widespread chaos when he recklessly shut down the government to try to get his expensive and ineffective wall, which he promised would be paid for by Mexico,” Schumer and Pelosi said. "Congress refused to fund his wall and he was forced to admit defeat and reopen the government. The same thing will repeat itself if he tries this again. We hope he learned his lesson.

“At a time when our country faces challenges about jobs for the future, this money would better be spent on rebuilding America, and on education and workforce development for jobs for the 21st century,” they concluded.

New York Democrat Rep. Nita M. Lowey said Trump's request was “not even worth the paper it’s written on.”

The news of the $8.6 billion request comes as White House economic adviser Larry Kudlow revealed Sunday that Trump, at the same time, wants a 5 percent cut “across the board” on all domestic spending as part of his proposed 2020 budget.

FILE - In this Nov. 25, 2018 file photo, migrants walk up a riverbank at the Mexico-U.S. border after getting past a line of Mexican police at the Chaparral border crossing in Tijuana, Mexico, as they try to reach the U.S. (AP Photo/Ramon Espinosa, File)

“It will be a tough budget,” Kudlow said during an appearance on “Fox News Sunday.” “We’re going to do our own caps this year and I think it’s long overdue.”

Kudlow, asked whether there would be pushback in Congress, predicted a rough road ahead.

“I suppose there will be,” Kudlow told anchor Chris Wallace. “I would just say that the whole issue of the wall, of border security, is of paramount importance. We have a crisis down there. I think the president has made that case very effectively.”

WATCH: INSIDE THE CRISIS AT THE BORDER

"The system is well beyond capacity, and remains at the breaking point."

Trump's plan to stick with the strict spending caps imposed years ago would be a first for his administration, and lawmakers have largely avoided such caps with new budget deals. The budget will propose serious cuts in safety net programs, which are used by many Americans, and other non-defense accounts. That will likely trigger a showdown with Congress.

The budget arrives as the president's Republican allies in the Senate, uneasy over the emergency declaration, are poised next week to debate terminating it. Some view it as an overreach of executive power. Congress appears to have enough votes to reject Trump's declaration, but not to overturn his expected veto of their action.

Pentagon: No military construction projects will be canceled to fund border wall

Trump will seek $750 billion for defense, a boost for the military, while cutting non-defense discretionary spending by 5 percent below the cap, said the official, who was unauthorized to discuss the document ahead of its release and spoke on condition of anonymity.

Budgets are mainly seen as blueprints for White House priorities. But they are often panned on Capitol Hill, where lawmakers craft the appropriation bills that eventually fund the government if the president signs them into law.

In the past, Senate Majority Leader Mitch McConnell, R-Ky., has described the president’s budget, as “a recommendation.” Last year’s White House budget blueprint asked for $25 billion to construct a southern border wall.

Trump's budget for the 2020 fiscal year will increase requests for some agencies while reducing others to reflect those priorities. Reductions are proposed, for example, for the Environmental Protection Agency.

The official said Congress has ignored the president's spending cuts for too long. The federal budget is bloated with wasteful spending, the official said, and the administration remains committed to balancing the budget.

The cuts being requested by the White House would hit discretionary spending as well as some mandatory safety net programs, which Trump has proposed in the past. Many Republicans are often eager to reduce government spending, but Congress has had trouble passing bills that seriously slash the safety net programs used by many Americans.

Budgets often rely on various accounting measures to achieve desired results. This one, for example, counts $546 billion in defense money as a base, but another $174 billion in another account to keep within caps.

And while the budget will suggest it balances in future years, it is also expected to rely on projections for continued economic growth from the tax cuts Trump signed into law in 2017. But there's no guarantee that would cover the lost tax revenues.

By proposing spending levels that don't raise the budget caps, the president is courting a debate with Congress. Lawmakers from both parties have routinely agreed to raise spending caps established by a previous deal years ago to fund the government.

Trump, though, has tried to resist those deals. He threatened to veto the last one reached in 2018 to prevent a shutdown. Late last year, a fight over border wall funds sparked the 35-day shutdown that spilled into this year and became the longest in history.