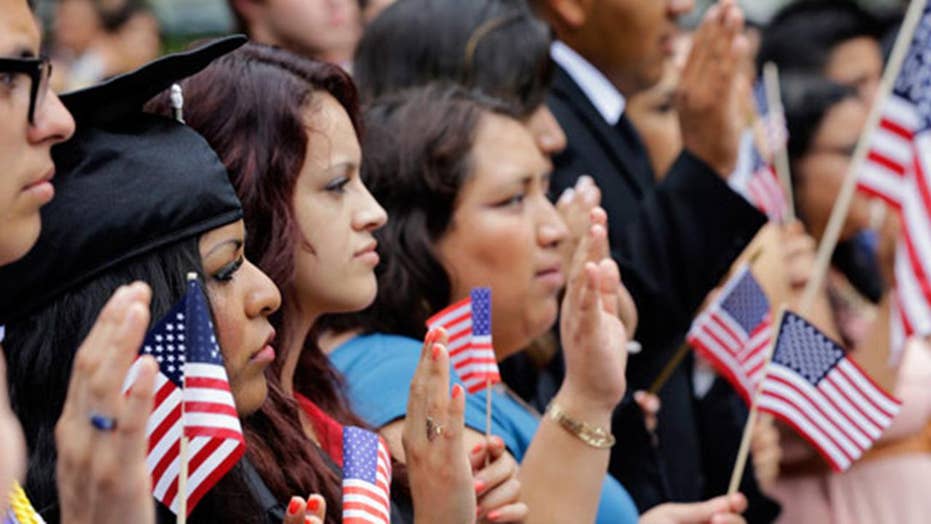 President focuses on unity at SOTU: Will DACA get done?

President Donald Trump late Thursday tweeted that top Democrats are “not calling” about DACA and indicated that Sen. Chuck Schumer and Rep. Nancy Pelosi, two top-ranking Democrats, will be to blame if no deal is made by next month’s deadline.

The president is turning up the heat on Democrats, who forced a government shutdown last month over the lack of deal on Deferred Action for Childhood Arrivals, or DACA recipients – illegal immigrants who came to the U.S. as children.

“The Democrats just aren’t calling about DACA. Nancy Pelosi and Chuck Schumer have to get moving fast, or they’ll disappoint you again,” Trump tweeted. “We have a great chance to make a deal or, blame the Dems! March 5th is coming up fast.”

“They Resist, Blame, Complain and Obstruct - and do nothing. Start pushing Nancy Pelosi and the Dems to work out a DACA fix, NOW!” he wrote.

The White House last week released an immigration plan offering a path to citizenship for nearly 1.8 million of the so-called “Dreamers” in exchange for a $25 billion investment in border security, including a wall along the Mexico border.

The plan was aimed to find a permanent legal solution to the issue of Dreamers after Trump rescinded the Obama-era program created through an executive order that offered deportation reprieve to illegal immigrants. It gave a six-month window to come up with a legislation.

During Trump’s first official State of the Union address Tuesday night, he said “Americans are dreamers, too” and talked about his “four pillars” of immigration reform that included provisions for DACA recipients and others who came to the country illegally.