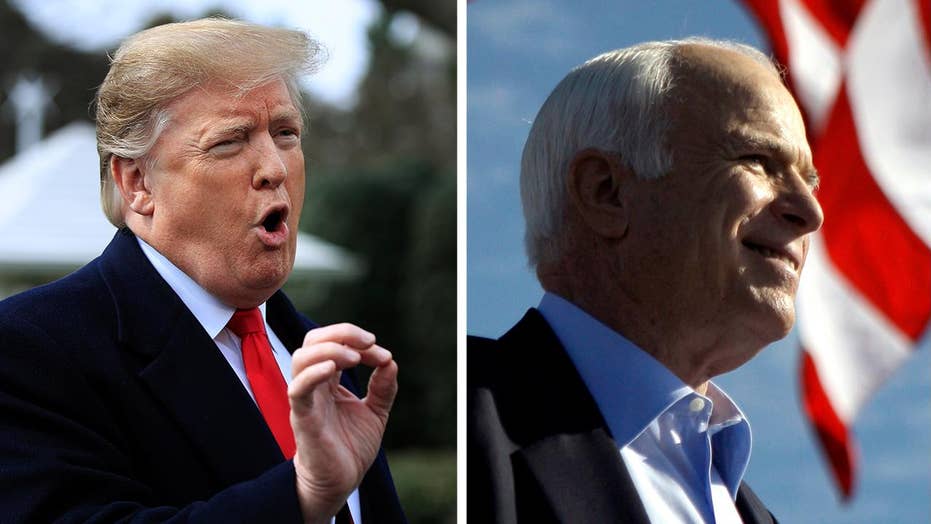 President Trump continued his attack on the late Sen. John McCain, R-Ariz., on Wednesday during a speech to workers at an Army tank plant in Ohio – slamming the deceased lawmaker for his support of the United States’ wars in the Middle East and his infamous vote against repealing and replacing the Affordable Care Act.

After touting his administration’s progress in combating the Islamic State in Syria and the U.S.’s recent economic successes, Trump tore into McCain’s legacy and in an unusual remark, took credit for the late senator’s state funeral in Washington late last year.

The president then went on with a laundry list of complaints he’s held against McCain – from an ally of the late senator reportedly handing over the so-called Steele dossier to the FBI to his support for American intervention in Afghanistan and Iraq.

DONALD TRUMP'S FEUD WITH MCCAIN FAMILY ESCALATES: 'I WAS NEVER A FAN'

“We’re in a war that McCain pushed for so hard,” Trump said. “We’re straightening it out, but it’s been a disaster.”

Earlier in his speech, Trump plugged his administration’s progress against ISIS and held up a chart showing territory controlled by the terror group on Election Day in 2016 compared with present day.

“As of today there is none, the caliphate is done as of tonight,” he said. 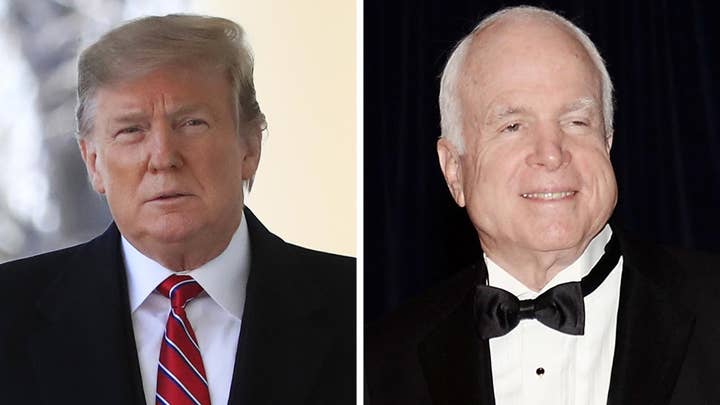 The president’s recent criticism of McCain and his legacy has rankled many members of his own Republican party – with many GOP lawmakers speaking out in defense of the late Arizona senator.

“Today and every day I miss my good friend John McCain,” Senate Majority Leader Mitch McConnell, R-Ky., tweeted. “It was a blessing to serve alongside a rare patriot and genuine American hero in the Senate. His memory continues to remind me every day that our nation is sustained by the sacrifices of heroes.”

Trump’s feud with McCain dates back to well before he was elected president.

In 2015, after McCain had said Trump's platform had "fired up the crazies," Trump mocked McCain's imprisonment in the Vietnam War, saying: "I like people that weren't captured."

The two continued to be at odds until McCain’s death from brain cancer last year.

While Trump had remained quiet about his dislike of McCain since the senator’s death, over the weekend the president renewed his attacks on McCain and blasted giving the FBI the uncorroborated Steele dossier alleging that Moscow held compromising information on Trump.

“Spreading the fake and totally discredited Dossier ‘is unfortunately a very dark stain against John McCain.’ Ken Starr, Former Independent Counsel,” Trump tweeted. “He had far worse “stains” than this, including thumbs down on repeal and replace after years of campaigning to repeal and replace!”

Sen. Johnny Isakson, R-Ga., has been one of the most vocal critics of the president’s attacks on McCain – saying earlier this week that "America deserves better" and that nobody "is above common decency and respect for people that risk their life for your life." 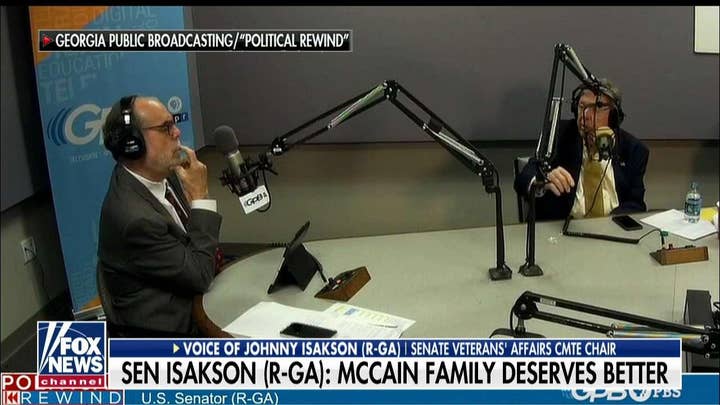 “I just want to lay it on the line, that the country deserves better, the McCain family deserves better, I don’t care if he’s president of United States, owns all the real estate in New York, or is building the greatest immigration system in the world,” Isakson said. “Nothing is more important than the integrity of the country and those who fought and risked their lives for all of us.”

Megan McCain, the late senator’s daughter and a co-host on ABC’s “The View,” tweeting early Wednesday “As my father always used to say to me - Illegitimi non carborundum” – a mock-Latin aphorism loosely translated as "Don't let the bastards grind you down.” She followed up on “The View” by saying her father “would think it was so hilarious that our president was so jealous of him that he was dominating the news cycle in death.”