The Justice Department asked a federal judge Wednesday to temporarily block a subpoena from New York prosecutors for eight years’ worth of President Trump’s personal and corporate tax returns as part of a criminal probe into possible campaign finance violations.

They also argued that U.S. District Judge Victor Marrero, who was appointed by President Bill Clinton, should retain jurisdiction over the case instead of allowing a state court to decide any issues. 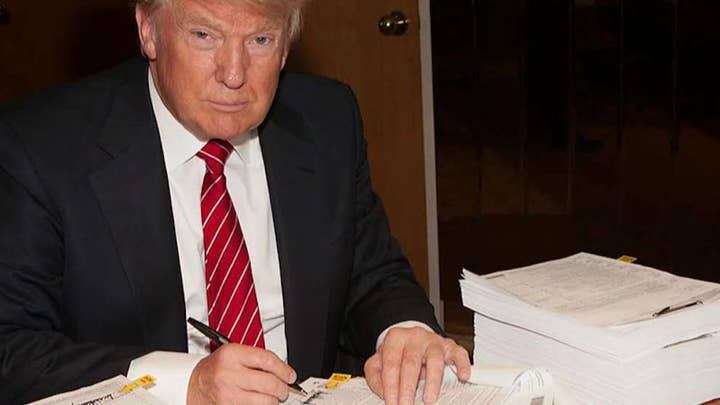 Vance, a Democrat, moved to have the tax return dispute moved to state court. Trump’s lawyers have said the investigation is politically motivated and the quest for the president's tax records should be stopped because he is immune from any criminal probe as long as he is president.

The subpoena was initially issued in August after federal prosecutors in Manhattan completed their investigation into payments made by Trump’s former personal lawyer Michael Cohen, who pleaded guilty last year to campaign finance violations, tax evasion, and other crimes and is currently serving a three-year sentence in federal prison.

Cohen orchestrated a payment of $130,000 to adult film actress Stormy Daniels, who said she had a sexual encounter with the president in 2006, in the weeks prior to the election. The president had reimbursed Cohen for the money paid, but denied the alleged affair, saying that the payments were personal matters, not campaign expenses.

Earlier this week, a federal judge in California released his written opinion to block a state law that would have required Trump to release five years’ worth of his personal income tax returns in order to be included on the state's primary ballot in March 2020.

Democratic-led congressional committees also are trying to obtain Trump's tax returns and other records that could provide a window into his finances. Trump and three of his children sued in April seeking to block two House committees from getting records that his longtime lender, Deutsche Bank, has said include tax returns.